Marshall speakers stand out. That’s why I dig them. From the company’s headphones to its speakers, the audio is warm and full just like the classic design suggests.

The company today is announcing revisions across its lines. The new versions of the Action ($249), Stanmore ($349) and Woburn Bluetooth ($499) speakers now feature Bluetooth 5.0, an upgraded digital signal processor and a slightly re-worked look.

Marshall also announced a new version of the Minor wireless in-ear headphones. The wireless headphones were among the company’s first products and the updated version now features Bluetooth 5.0 aptX connectivity, new 14.2 mm drivers and 12 hours of battery life. Marshall also says the redesigned model will stay in place better than the original model.

It’s important to note that the company behind these Marshall speakers and headphones is different from the company that makes the iconic guitar amp though there is collaboration. The Marshall brand is used by Zound Industries, which also operates Ubanears.

The models produced by Zound Industries stay true to the Marshall brand. I’ve used several of the products since the company launched and I’m pleased to report that this new generation packs the magic of previous models.

The company sent me the new Woburn II speaker (pictured above) and it’s a lovely speaker. This is the largest speaker in the company’s line. It’s imposing and, in Reddit-speak, an absolute unit. It’s over a foot tall and weighs just under 20 lbs.

The speaker easily fills a room. The sound is warm and inviting. 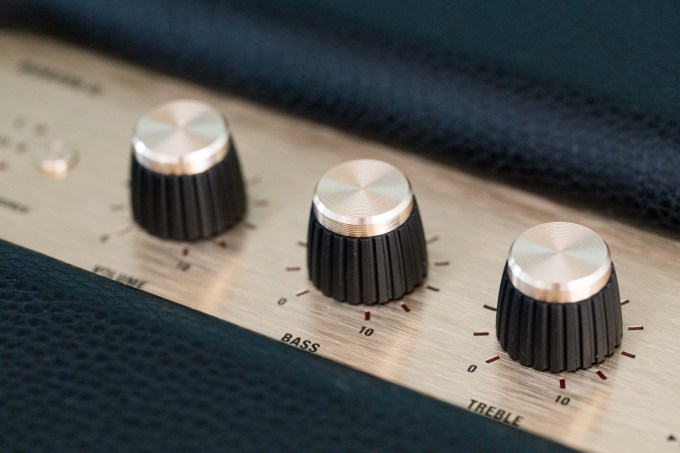 The Woburn II features a ported design which helps create the rich sound. Bass is deep though doesn’t pound. Mid-tones are lovely and the highs are perfectly balanced. If they’re not, there are nobs mounted on the top to adjust the tones.

I find the Woburn a great speaker at any volume. Turn it down and the sound still feels as complex as it does at normal listen volumes. Crank the speaker to 10, drop the treble a bit, and the speaker will shake walls.

Don’t be scared by the imposing size. The Woburn II can party, but it is seemingly just as happy to spend the evening in, playing some Iron and Wine.

Sadly, the Woburn II lacks some of the magic of the original Woburn. The new version does not have an optical input and the power switch is a soft switch. It’s just for looks. The first Woburn had a two position switch. Click one way to turn on and click the other to turn off. It was an analog experience. This time around the speakers retain the switch, but the switch is different. It’s artificial and might as well be a power button. When pressed forward, the switch turns on the speaker and then snaps back to its original position. The clicking it gone. I know that seems like a silly thing to complain about but that switch was part of the Marshall experience. It felt authentic and now it feels artificial.

The Woburn II is a fantastic speaker with a timeless look. At $499 it’s pricy but produces sound above its price-point rivals. I expect the same performance out of updated Action II and Stanmore II speakers. These speakers are worthy of the Marshall name.