In what might be the most ridiculous stunt ever pulled in the art world, a Banksy piece has, in a sense, self-destructed. Right in front of an audience of would-be buyers.

A framed canvas version of Banksy’s Girl with Balloon was set to be auctioned at Sothebys in London. As the auction came to a close with a final bid of £860,000 (a little over $1.1 million), the print’s frame began… beeping. Then, whirring. Seconds later, the canvas slid through the bottom of the frame, now almost entirely shredded.

The anonymous artist has long expressed a dislike of art galleries reselling their works, down to creating a piece featuring an audience of bidders battling over a print that reads, simply, “I can’t believe you morons actually buy this shit”. This seems to be Banksy’s latest way of expressing their discontent.

Of course, it’s easy to argue that the whole thing makes the piece even more desirable, because, well… art. If people with mountains of cash are buying art to have a ridiculously rare conversation piece that they hope others recognize, this one just rocketed up the list. It’s now that piece. Or technically those pieces, I guess.

Curiously, the canvas didn’t make it all the way through the shredder — did it jam, or was that intentional? By leaving about 1/3 of the print in the frame, the shredded bits are left attached and dangling… thus preventing them from splitting the pile of shreds into 50 more auctions with everyone vying for a slice.

So how did it all work? Writer Zoe Smith shared a video on Twitter this morning that she notes appeared briefly on Banksy’s Instagram before being pulled down (Update: it’s now back up! See below). It shows what looks to be the inside of the frame (which, in hindsight, seems comically large), shredder and all: 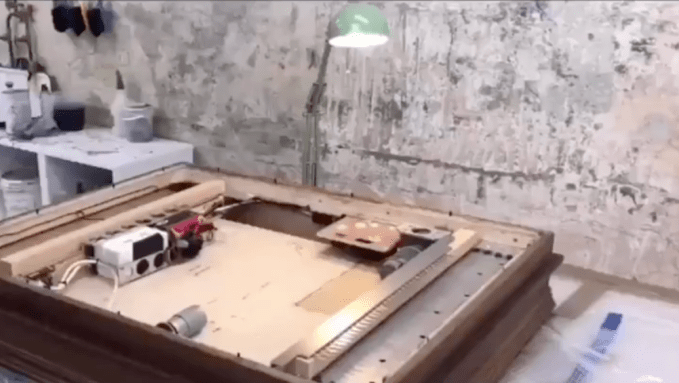 Update — here’s the video, as reposted by Banksy:

. "The urge to destroy is also a creative urge" – Picasso

In the same video, it’s claimed that this was all put in process “a few years ago”. It appears that the “shredder” is a series of X-acto style blades which the canvas was raked over.

Meanwhile, a news post on Artsy suggests that the shred could’ve been triggered by someone in the audience with “a device in his hand”.

But what about power? In a video of the piece being removed post-shreddage, there doesn’t seem to be any wires behind the frame, nor anything plugged in. The piece itself is detailed as having been given to its previous owner by Banksy in 2006. Both the speakers in the frame and the motors of the shredder would require a power source. Keeping a battery ready and waiting for 12 years seems… unlikely.

The Sotheby’s listing for the piece notes that it was “Authenticated by Pest Control”. Pest Control is Banksy’s “handling service”, which will go out to verify supposed Banksy pieces to try to make sure no one drops a pile of cash on a one-of-a-kind Borksy. Perhaps part of the verification process involved double checking everything within the frame.

Some folks on Twitter, meanwhile, theorize that the original print could still be hidden within the frame, with what emerged having been shredded and rolled up in the frame long ago. That video Banksy posted showing the blades within the frame makes that seem unlikely… but could it be pranks all the way down?

Banksy posted a too-perfect still of the shred in process, with the caption “Going, going, gone…”