Facebook Messenger could soon let you use your voice to dictate and send messages, initiate voice calls and create reminders. Messenger for Android’s code reveals a new M assistant button atop the message thread screen that activates listening for voice commands for those functionalities. Voice control could make Messenger simpler to use hands-free or while driving, more accessible for the vision or dexterity-impaired and, perhaps one day, easier for international users whose native languages are hard to type.

Facebook Messenger was previously spotted testing speech transcription as part of the Aloha voice assistant believed to be part of Facebook’s upcoming Portal video chat screen device. But voice commands in the M assistant are new, and demonstrate an evolution in Facebook’s strategy since its former head of Messenger David Marcus told me voice “is not something we’re actively working on right now” in September 2016 onstage at TechCrunch Disrupt.

The prototype was discovered by all-star TechCrunch tipster Jane Manchun Wong, who’d previously discovered prototypes of Instagram Video Calling, Facebook’s screen time digital well-being dashboard and Lyft’s scooter rentals before they officially launched. When reached for comment, a Facebook Messenger spokesperson confirmed to TechCrunch that Facebook is internally testing the voice command feature. They told TechCrunch, “We often experiment with new experiences on Messenger with employees. We have nothing more to share at this time.”

Messenger is eager to differentiate itself from SMS, Snapchat, Android Messages and other texting platforms. The app has aggressively adopted visual communication features like Facebook Stories, augmented reality filters and more. Wong today spotted Messenger prototyping augmented reality camera effects being rolled into the GIFs, Stickers and Emoji menu in the message composer. Facebook confirms this is now in testing with a small percentage of Messenger users. 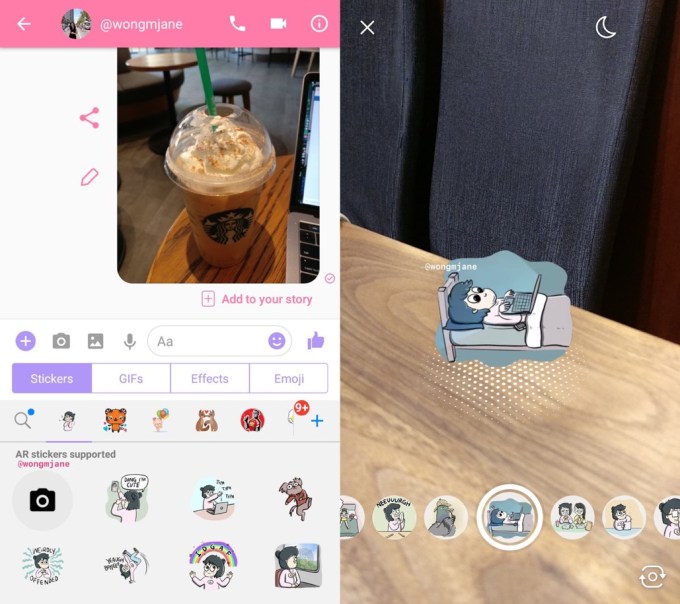 Facebook has found that users aren’t so keen on tons of bells and whistles like prominent camera access or games getting in the way of chat, so Facebook plans to bury those more in a forthcoming simplified redesign of Messenger. But voice controls add pure utility without obstructing Messenger’s core value proposition and could end up getting users to chat more if they’re eventually rolled out.