Amazon’s Alexa app has just been given a major visual overhaul, largely focused on helping users set up and control their smart home. From the app’s new devices tab, users can view all their different Alexa-enabled devices and groups on one screen, as opposed to switching between tabs like before. And the app is much more colorful, too. Instead of a set of white icons on a dark background, Alexa’s device groups — like Living Room, Kitchen, Bedroom, etc. — now feature colorful backgrounds, so you can find the one you need with just a glance.

An overhaul of the devices section was needed, not only for aesthetic reasons, but because Alexa owners are stocking their house with more than one smart device.

According to a Nielsen report on smart speaker adoption released earlier this month, four out of 10 U.S. smart speaker owners today have more than one device, for example. Smart home device sales are also expected to reach nearly $96 billion in 2018 and grow to $155 billion by 2023, another report estimates.

Amazon itself sells a variety of smart devices, like Cloud Cam, Ring doorbells and Ring cameras. And it just introduced a whole mess of new Alexa-enabled devices at an event in Seattle last month, including everything from wall clocks to subwoofers to Alexa-powered microwaves.

It’s clear the retailer expects people to continue to build out their smart home, and its app needed to adapt accordingly. 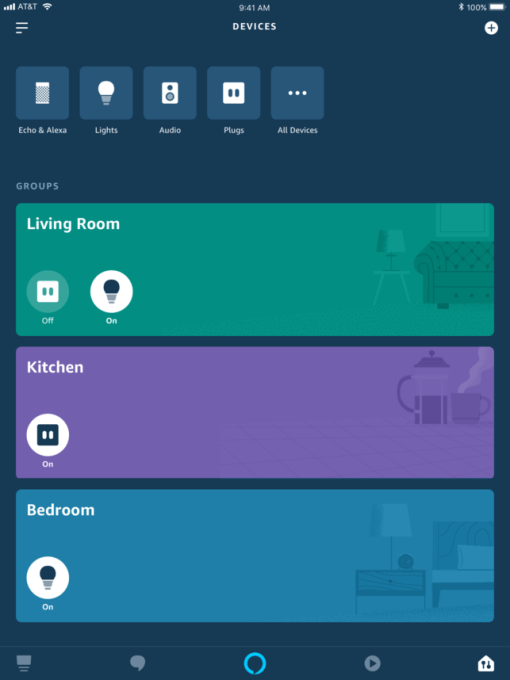 In the new version of the app, the device types are displayed as icons across the top of the screen — starting with “Echo & Alexa” devices, then “Lights,” “Audio,” “Plugs” and others. Below this are the colorful groupings of devices by room, each with their own “On/Off” button.

A small “+” button at the top right of the screen allows you to easily add your newest device, too.

The redesign also makes it simpler to call, message or “drop in” on your other Alexa devices — the latter being the feature that turns Echo speakers into a voice-controlled intercom system of sorts, triggered by saying “Alexa, drop in on…” followed by the device name. It’s especially handy for larger homes, where there is an upstairs and downstairs, for example, or for reaching family members in another part of the house. You can also drop in on trusted contacts, like grandma or grandpa.

Now, these communication options each have their own button at the top of the messaging screen in the app, so you can just push a button to call, message or drop in, as you prefer.

The new Alexa app is live on the iOS App Store. Amazon hasn’t made a formal announcement about the changes, as they still be rolling out to users following the update.