Kia is finally sharing more details about its upcoming all-electric crossover — the 2019 Kia e-Niro — that made its debut in Korea earlier this year. The upshot: it’s got some range.

The production version of the all-electric crossover, which Kia is showing off at the Paris Motor Show this week, has a range of about 301 miles (for those who opt for the bigger battery pack) on the European WLTP combined testing cycle. The estimated EPA-range has yet to be released, but expect it to be lower, at somewhere around 250-ish miles in the U.S.

That 301 miles of range is one of the longer ranges in the world of EVs and it’s possible thanks to a 64 kilowatt-hour battery pack, regenerative braking and a feature that gives the driver suggestions on when to coast or brake to further optimize the system. The e-Niro with the 64 kWh battery pack is combined with a 150kW electric motor that produces 201 horsepower and 291 pound-feet of torque.

The vehicle comes standard with a smaller 39.2 kWh battery, which has a 100 kW electric motor and offers a driving range of up to 193 miles on a single charge under the WLTP cycle.

The e-Niro is headed to Europe first. The company says the e-Niro will go on sale in select European markets at the end of the year. Kia’s U.S. website indicates the vehicle will also come to the states by the end of the year. However, we have yet to hear specifics on U.S. sales or whether the European rollout might push that date into 2019.

The e-Niro looks a lot like its gas-based counterpart and offers some of the same features, including the option to add a driver assistance system with adaptive cruise control, automatic emergency braking, forward collision warning and lane-keep assist.

However, there are a few differences. The grille on the e-Niro has an integrated charging port and the front bumper has been changed to help improve the aerodynamics, and, by extension, the range of the vehicle. The vehicle also has redesigned air intakes.

The inside is a bit different too, as there’s no need for a traditional gear stick and gear linkage in a vehicle with an all-electric powertrain. Nor is there a need for a transmission tunnel, allowing engineers to create a larger storage area at the base of the central console. Kia replaced the transmission with a new “shift-by-wire” rotator dial drive selector. 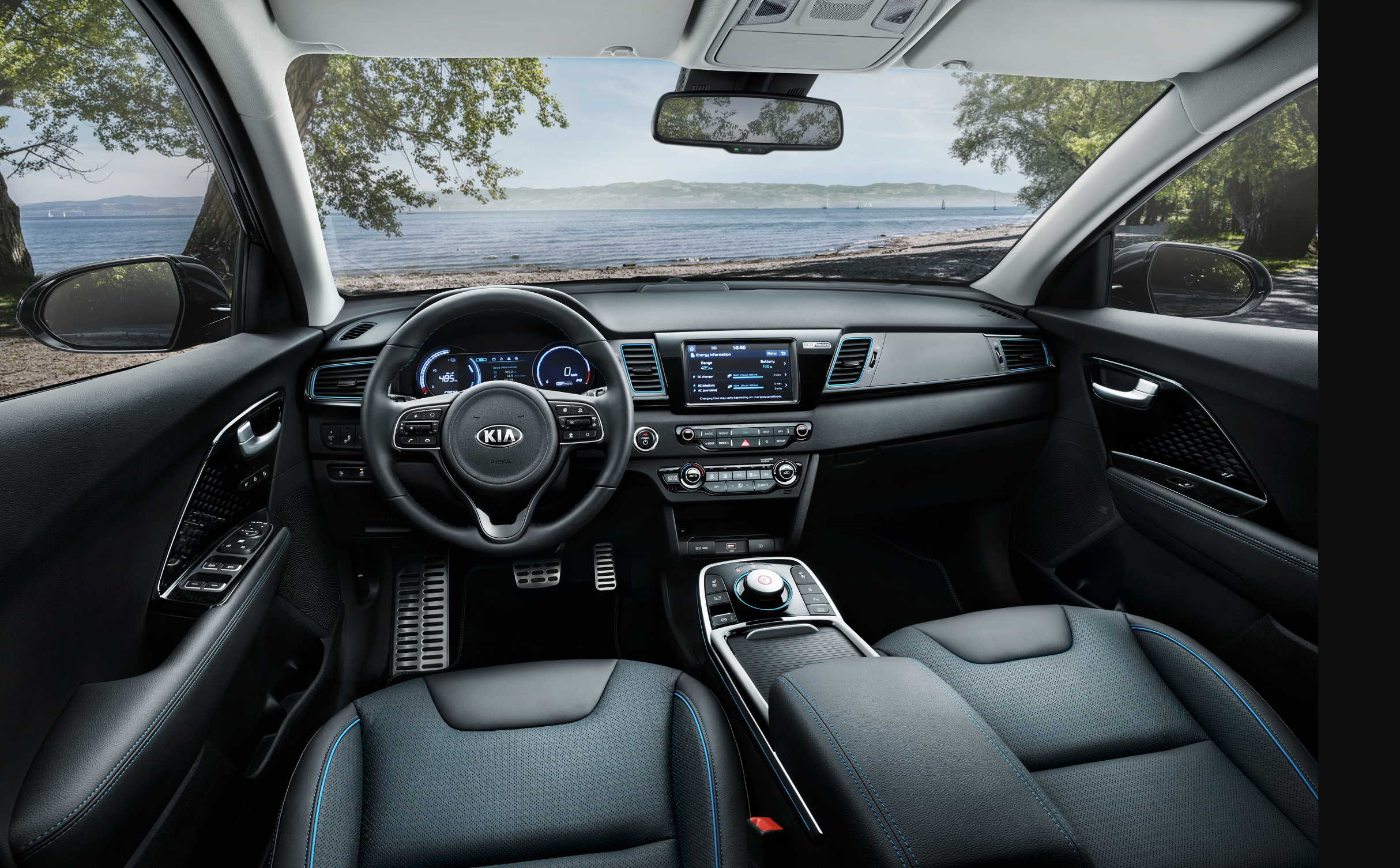 The dial sits on a panel that extends out from the base of the central armrest. Drivers will also find on the panel buttons for the electronic parking brake, heated and ventilated seats, heated steering wheel, drive mode selector, parking sensors and the Niro’s braking “Auto Hold” function.

The vehicle is equipped with a 7-inch touchscreen at the center of the dashboard that includes a few electric vehicle-specific features, such as the ability to find nearby charging stations and monitor charge levels. Owners will be able to set a departure time for their next journey, enabling the car to heat itself to a set temperature before the driver departs. There’s also a charge management function designed to extend the life of the battery.