I haven’t seen a virtual reality glove system that also includes a suitcase-sized pneumatic box accessory, but then again there aren’t too many VR peripherals that have delivered quite the depth of immersion of the HaptX system.

Today, HaptX announced the release of their Gloves development kit that will allow its users to feel pressure and resistance in their virtual reality interactions, all while delivering smooth hand-tracking. The company, whose backers include Chinese gaming company NetEase and ex-Twitter CEO Dick Costolo, wants virtual reality experiences to be more than just what people are seeing; they want to drive big improvements to the quality of their physical interactions as well. I had a chance to don the latest HaptX gloves and look like a real VR monster while playing through a demo that highlights some of their device’s capabilities. 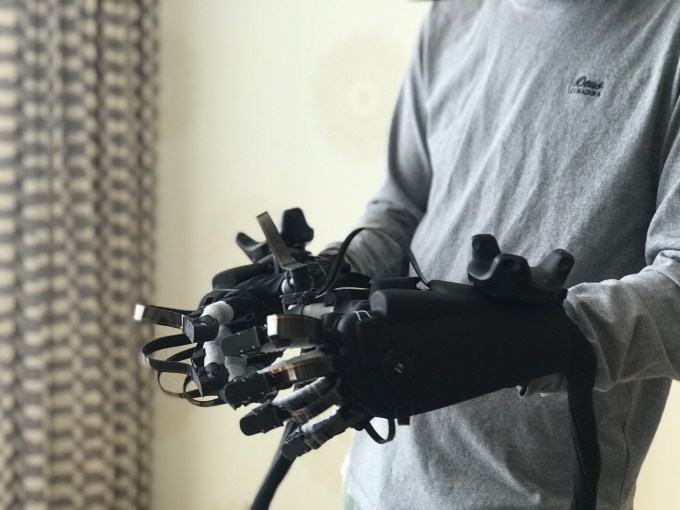 The big highlight of the system is the pressure sensitivity it offers, meaning that you can roughly tell what an object feels like when you grab it because little air bubbles are building out the shape of the object inside the gloves. This is the reason there’s a suitcase-sized box filled with pneumatic actuators, which the company says has been rapidly shrinking and will be much smaller by the time the product exits the dev kit phase. Alongside the pressure offered by the 130 feedback points, there’s also a bit of an exoskeleton around your hands designed to give your fingers some resistance as you try to close them on solid objects.

To account for the bulkiness of the system and all of the hand-tracking occlusion that would occur as a result, HaptX isn’t using IR cameras to map where your hands are like a system from Leap Motion might. Instead, the startup is using magnetic planar tracking to track the movement and position of your fingers and joints. It’s the same kind of tracking tech used in the Magic Leap remote, but it’s a bit more of a stress test here, given just how much is being tracked. The system held up well enough teamed with some Vive trackers to estimate the positions of my arms themselves in VR.

Actually playing around with this was a bizarre sensation; I felt like a mech monster, even when they tossed me into a demo simulation that had me cutting wheat in a barnyard scene and picking up a little fox. 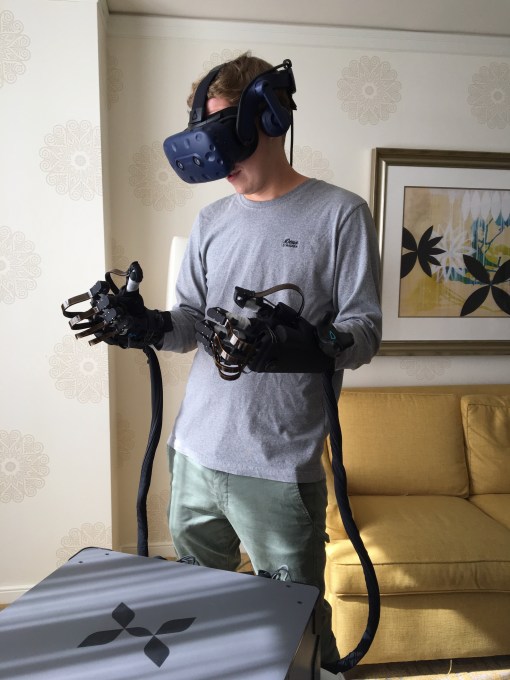 The system definitely worked best with more subtle feedback. When grabbing something absolutely solid like a small rock, I was far less tricked by the glove system than when I was feeling virtual rain hitting the gloves and delivering tapping sensations on my hand at the same rate. Feeling a spider jump on to my hand and all of its legs move across my palm was honestly one of the least pleasant things I’ve experienced in VR and left my spine crawling while I flicked the digital spider off my very disturbed real body.

It’s all engaging, but who on earth needs something like this?

I found myself wondering that even as we discussed enterprise solutions. HaptX sees their expensive glove system as a peripheral that makes good on a lot of the failed promises of other systems and as something that has some real promise in the prototyping phase for manufacturing or in making workplace training highly realistic. I have tried several other VR gloves, and this is definitely the most complete solution, even if it is likely the most bulky and most expensive solution, as well — though the company isn’t releasing pricing details on its system yet. If a company is interested in bringing hands into a VR experience and just wants the best possible solution out there regardless of price or complexity, this is probably what they will want to buy.

Walmart is putting 17,000 Oculus Go headsets in its stores to help train employees in VR

This isn’t remotely a consumer solution and seems to definitely be a fringe enterprise product in its current iteration, but as virtual reality systems begin becoming more commonplace in workplace settings, it’s not unreasonable that these companies are going to want input methods to become more realistic and shift away from controllers toward VR gloves that can translate more directly what people have been trained in.