This year has seen a number of tech companies that are majority or substantially owned by Chinese giant going public in the U.S. Baidu’s iQiyi service, Xiaomi-backed Huami and Viomi are a few examples, and now Tencent Music — the music division of Tencent, as you can guess — is making its run after plenty of speculation.

TME — Tencent Music Entertainment — filed initial paperwork to go public in the U.S. (exchange not specified) overnight and the initial target is a $1 billion raise, although that is subject to change. We know that Tencent Music is valued at least at $12 billion, based on data from Spotify’s IPO earlier this year, so it’ll be interesting to note how much that rises from this listing.

Unlike Apple Music, Spotify or Pandora, TME is a profitable business, but its gross revenue and the way it makes money is quite different to its Western brethren. Spotify and co rely on subscriptions and ad-supported free tiers, Tencent Music draws the majority of its revenue from social activities, advertising and song sales. 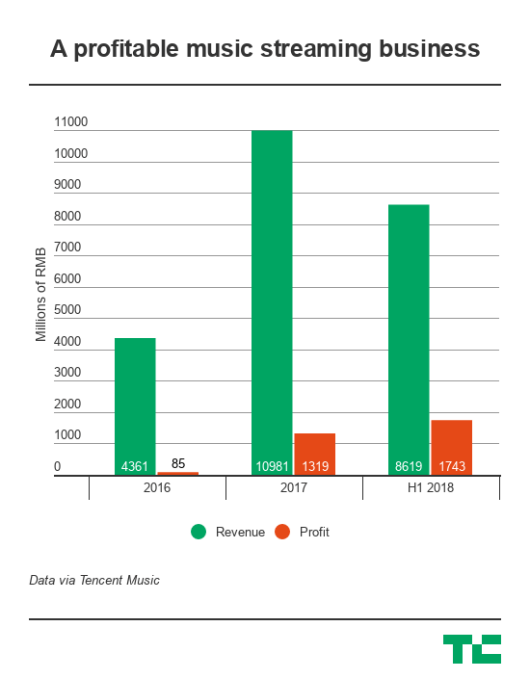 A large part of that success is its connection to Tencent services — in particularly WeChat, which counts one billion users, and QQ but also Tencent Video — which give Tencent Music’s services an avenue to reach users and spread across friend graphs and networks. That’s helped keep marketing expenses down and ultimately make the company profitable. Tencent Music’s cost of revenue is 60 percent, versus nearly 75-85 percent for Spotify which has to do a lot more work to bring users in.

Interestingly, Tencent Music notes in its prospectus that it expects revenue from subscriptions to increase over time.

“We had a paying ratio of 3.6 percent in the second quarter of 2018, which is still very low compared to the paying ratios of online games and video services in China and other online music services globally as quoted by iResearch, which indicates significant growth potential,” the company wrote. 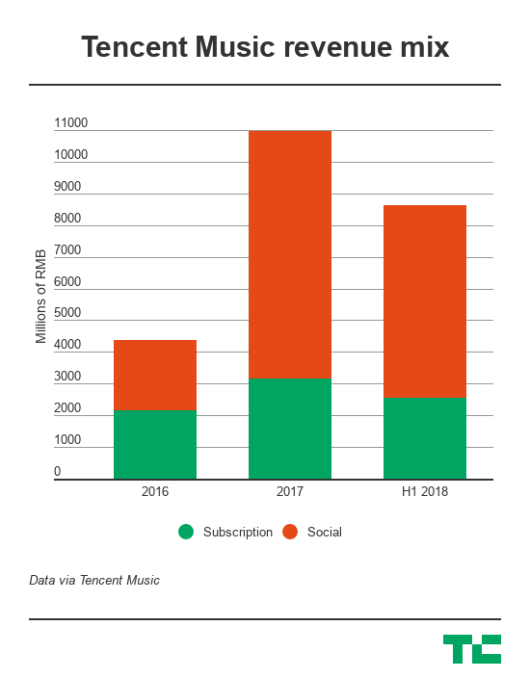 That’s not a given though when you consider how rife privacy is in China. Those in the industry claim it is changing, it’s in their own interests to say that, but it is unclear whether the alternative ‘social’ monetization models that Tencent Music taps cannibalize potential subscription-based revenue.

Either way, the company might be able to learn from the West, too. Spotify holds a 9.1 percent stake in the business courtesy of a share swap last year — Tencent owns 7.5 percent of Spotify — which could yet lead to synergies between both sides, although Spotify competes with Tencent-owned Joox (not part of TME) in markets like Southeast Asia.

For now, the main takeaway is that Tencent Music is China’s top streaming dog and it is leaning on WeChat, the country’s dominant messaging platform. That bodes well, but, as repeated numerous times in its prospectus, monetizing music is still a new concept in China so there are few parallels to look at for guidance.

Still, this is a rare example of Chinese tech IPO that isn’t hemorrhaging cash — for example, Nio — which, coupled with the Tencent connection, is likely to make it a popular one.