Heed, a startup looking to create new ways for sports leagues and clubs to engage with fans, is announcing that it has raised $35 million led by SoftBank Group International.

As laid out for me by CEO Danna Rabin, the company sits at the intersection of sports and IoT — which makes sense, since it was founded by Internet of Things company AGT International and talent agency Endeavor.

“Our primary mission is to connect the young audience with sports leagues and clubs,” Rabin said. “[Those] audiences are consuming less broadcast TV, consuming less of anything linearly. Sports clubs and brands are having more and more issues connecting with and reengaging those younger audiences.”

To create that connection, Heed places sensors around the match or game venue, even potentially on players’ clothing and equipment.

For example, the team let me make a couple punches using gloves with sensors inside, which were created for the mixed martial arts league UFC. Afterwards, I could see the measured force of each of my swings. (I didn’t really have any points of comparison, but I think it’s safe to say that my numbers weren’t too impressive.) 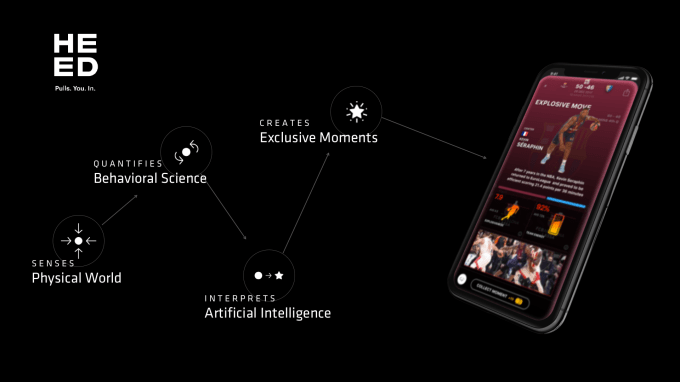 Rabin emphasized that Heed’s real focus isn’t on building fancy hardware, but rather on the artificial intelligence it uses to take that data (which can also be drawn from video and audio footage of the match) and transform it into a general narrative that can be viewed on the Heed smartphone app.

Pointing to the UFC glove, Rabin said, “We extract, only from this sensor, 70 different data points. What’s happening is, the fusion of these data points is what creates the stories.”

Put another way, the goal is to replace the generic commentary that you often get in sports coverage and live games with unique details about how the game or match is unfolding. Those aren’t just numbers like how hard someone is punching, but also inferences about a player’s emotional state based on the data.

“One of our core promises is that it’s not editorial driven,” Rabin added. “The AI is selecting what’s interesting in a match. Of course, we have a creative team that designs the formats, the visuals, how the packaging should look like, but that’s incorporated into the technology, which is automatically selecting the moments and creating the experiences with no human interpretation.”

So does Heed aim to be a technology provider or a sports media company of its own? Well, Rabin said it didn’t make sense to simply provide the tech to individual leagues or teams.

“A specific club does not have the breadth of technologies to keep evolving,” she said. Plus, she argued that the audience isn’t looking for just a one-off site with stories about one team, but an all-around destination where they can “get a bit of everything.”

In addition to the UFC, Heed is also working with EuroLeague (the European basketball league), various soccer clubs and Professional Bull Riding. In the latter case, it’s not just creating content, but actually working with the organization to create a more automated and objective form of judging.

“By leveraging AI and IoT, HEED has developed a unique platform that is changing the way fans watch and interact with sports,” said Softbank President and CFO Alok Sama. “HEED is taking a traditionally static experience and providing fans with deeper insights into the physical and emotional aspects of the sporting event by gathering and analyzing large, complex data in real time.”