The education market has long been one of the cornerstones of growth for Apple’s hardware business, and today the company is leveraging its popularity in it, specifically among college-aged students, to build out a newer effort. Today, Apple started to integrate university student ID cards — used to access buildings, pay for food or books, and any other transactional campus services — into Wallet, its contactless payment system on the Apple Watch and the iPhone. The first schools to come online are Duke University, the University of Alabama and the University of Oklahoma. 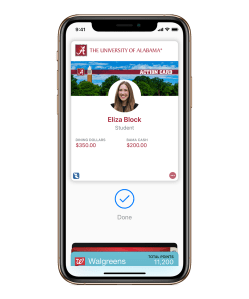 Apple had actually announced the service back in June, during WWDC, earmarking the three schools going live today. It said that Johns Hopkins University, Santa Clara University and Temple University will start using the service by the end of this year.

The expansion comes at a time when Apple is riding on a growth high for its mobile wallet. iPhone and Watch owners have been shown to be enthusiastic users of their devices for making purchases (thrice as more avid, it seems, than Android users), and on the back of that, Apple Pay — which is now live in 24 markets — has laid claim to being the most popular mobile contactless payment in use today, with some 1 billion transactions in the last quarter alone, up three-fold from a year before.

Many of those transactions are specifically related to Apple Pay, made using more traditional payment cards such as American Express or Visa credit cards, and at traditional retail locations — Apple says it expects 60 percent of all US retail locations to support Apple Pay by the end of this year, including over 70 of the top 100 retail chains.

But Apple has also been pursuing a second wave of growth to make Wallet useful, by encouraging people to upload and use the myriad cards they have for various other services, such as loyalty cards and passes for city transport systems. Twelve US metro areas already use Apple Pay, and there is ground being gained internationally too in markets like the UK, China and Japan. 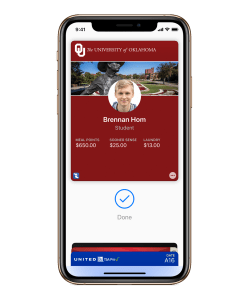 “iPhone and Apple Watch have brought us into a new era of mobility, helping to transform everyday experiences,” said Jennifer Bailey, Apple’s vice president of Internet Services, said in a statement. “When we launched Apple Pay, we embarked on a goal to replace the physical wallet. By adding transit, loyalty cards and contactless ticketing we have expanded the capabilities of Wallet beyond payments, and we’re now thrilled to be working with campuses on adding contactless student ID cards to bring customers even more easy, convenient and secure experiences.”

Apple Pay may not appear to massively profit Apple in a direct way — as it’s been pointed out by others, the percentages on payment transactions are tiny — but what it does give the company indirectly is another tie into how people use their phones and watches, making the devices more valuable to their owners, and those users more tied into the Apple ecosystem.

At colleges (and other schools), we’ve seen an increasing use of student ID cards not just as a way to identify yourself, but to access services and buildings, and also to pay for things, and use of contactless versions of these has been on the rise. Part of the reason for this is safety: having one card for everything means students need to carry less valuables, and if they lose it or it’s stolen, the card can be more easily replaced. At the same time, watches and phones are not items they’re leaving behind, so further consolidating, and making those cards more secure by way of Apple’s device locks, makes sense.

What we don’t know is if Apple is getting a commission (even a tiny one) on the payment transactions made via these student cards. We have asked the company and will update as we learn more.

Educational institutions aren’t the only not-strictly-retail locations that are being put into Wallet. Apple’s been adding sports venues to let attendees use Wallet to carry their tickets, and to then buy food and other concessions once you get in. (See how Apple uses one non-commissioned transaction to lead you into using it for one that might be?)

Today, Apple is estimated to account for between 14 percent and 17 percent of the K-12 education market in the US, and with the likes of Google and Microsoft also pushing hard for growth both here and in higher education, you can see how adding in more services like this could help Apple expand its piece of the pie.