Universal remote system Caavo is addressing some of the complaints with its first-generation hardware with today’s release of a new, more affordable system. Unlike the original, $400 home theater product, this second device arrives at consumer-friendly price point of $99.95 and adds support for 4K HDR, as well as other features focused on playlist creation and community sharing.

Caavo has always gotten points for being unique. It designed an odd device solving a pain point a number of people don’t have – that of owning too many streamers, game consoles, and other set-top boxes, and struggling with constantly switching remotes and flipping between various devices.

In reality, the people reviewing systems like these – tech reporters, generally – face this exact problem, with Fire TVs, Apple TVs, Chromecasts, Rokus, and other gaming consoles and boxes cluttering up their living rooms. But most consumers they are not.

The mainstream is still just now cutting the cord with cable TV and picking up their first media streaming device, or adding one to the mix in addition to their cable box. They may or may not have a traditional game console. Switching in between a couple of HDMI inputs on a TV set hasn’t felt like an overwhelming struggle to be solved. And finding something good to watch isn’t so hard either – if anything, there’s too much great TV these days.

Caavo then, wasn’t for everyone – it was for a sliver of the market.

The Control Center lets you connect up to four devices and a soundbar, compared with the original Caavo’s eight devices. It ditches the pricier device’s fancy cable management system that used posts to organize cables for just a set of standard HDMI ports on the back of its box. It also doesn’t ship with the 3″ red-and-white HDMI cable – you bring your own.

And it drops its design-forward real wood covers and decorative touches for a shiny black look instead. 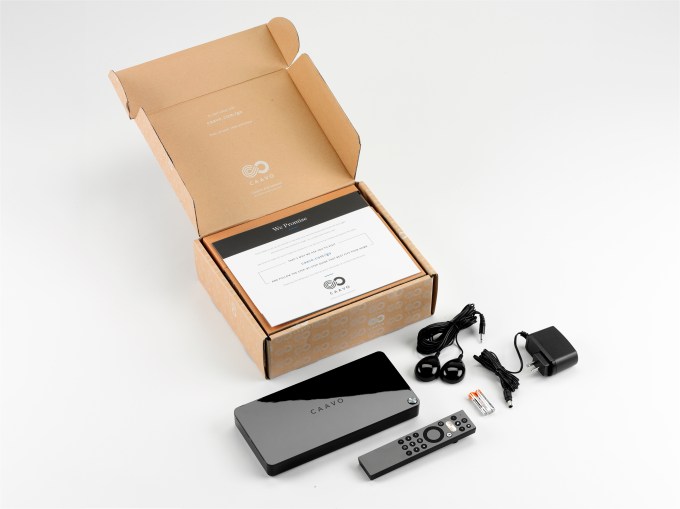 Most importantly, the new device supports 4K HDR and Dolby Atmos – which the flagship product lacked, and was a definite hurdle in getting consumers to buy. (After all, if you’re the type of person with too many streamers, you’re probably rocking a nice TV, too. And at $400, lacking HDR was seen as a non-starter for those in the market for something like this.)

The company says the Control Center will be able to detect that the TV and source are HDR capable. It then negotiates with the source to allow the source to send an HDR bit stream and sends it to the TV.

The Control Center’s universal remote keeps the same button layout as before, for the most part, with its big, centered “Caavo” button for calling up the software’s main menu for switching devices and apps, alongside its various other navigation and TV controls. It’s simple enough to use, and still has the little stand, too, which has always been a nice touch.

Of course, the big selling point for a universal remote system is universal support for TVs. Caavo works to control TV power and volume across a range of top devices, like LG, Panasonic, Phillips, RCA, Samsung, Sharp, Sony, Toshiba and Vizio.

Setting up my (crappy!) Polaroid TV was more cumbersome. It figured out the volume controls, but not the power on/off. I still have two remotes. Oh well. (I was never really the target demographic, though. We’re not home media geeks – we watch just as often on mobile devices than the big screen. And we’re generally happy here with just a Roku.) 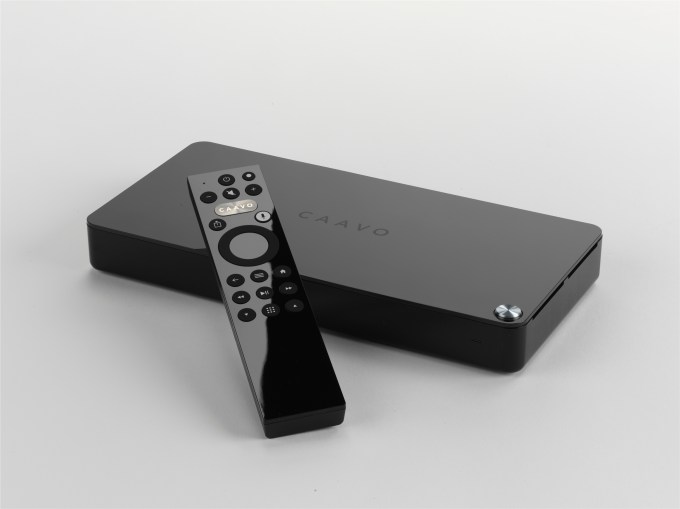 Caavo can connect a variety of streaming devices – Roku, Fire TV, Apple TV with Siri Remote, Nvidia Shield TV, cable set-top boxes (Xfinity, UVerse, Dish, DirecTV, etc.), DVD/Blu-ray players, and game consoles. But adding something weird – like this goofy AirTV Player from Dish – was more trouble than it was worth. (You would probably need a bit a tech support to try to map the buttons correctly here.)

The Control Center adds support for Amazon Alexa and Google Assistant voice controls through a voice app. (e.g. Alexa, tell Caavo to…”) But it doesn’t feel natural. And if you want to use Alexa with your Fire TV, or Siri on Apple TV for their device-specific commands, you’ll still need their remotes. You can, however, use verbal commands to power on the Control center, search for shows and movies, control the volume, play content, and other remote-control functions.

Some of this still feels gimmicky, but that’s not Caavo’s fault, necessarily. Talking to TVs just isn’t as natural as grabbing a remote and mashing a button. It may not be for everyone.

You can locate a lost remote by pressing a button on the top – a standard feature on Roku’s high-end device, too.

With some of Caavo’s earlier key problems – like lack HDR support and a too-high price point – addressed, the company turned its focus to its software with the launch of Control Center.

“We want to provide a solution for people who are as entertainment obsessed as we are – who want to see all their options across all their devices and apps and subscriptions in one place,” says co-founder Andrew Einaudi. “The only thing we are more obsessed with than watching great shows is talking about them, so we wanted to create a new community where you could always find something great to watch.”

Like the first device, Caavo’s Control Center offers universal search across streaming services – an unbiased list of places where you can watch what you want. (Roku does this too, so it’s not really a Caavo exclusive.)

While individual streaming services like Netflix use a combination of algorithms based on viewing behavior to make suggestions, Caavo is going a different route in Control Center – it’s offering its own editorial suggestions. The interface will now feature hand-picked, curated lists compiled by editors and tastemakers in the Caavo community. 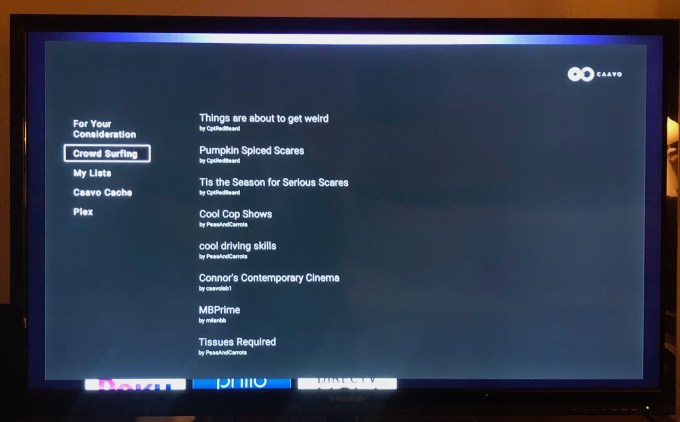 You can contribute, too, through the new “My Lists” feature which let you make lists of things to watch across streaming services and live TV alike, then share them with the Caavo community through the Crowd Surfing feature. You can also keep them private, if you choose.

“We are improving our algorithms on the software side but there’s also something to be said for real recommendations from real people,” noted Einaudi.

I’m not convinced this feature is all that useful, however. Because “anyone” can contribute, the lists section is cluttered with random suggestions, often without titles that make any sense to anyone but the original creator. “Things are about to get weird,” offered one list. “Pumpkin Spiced Scares,” was another. (Frankly, I’d take an algorithm, if I’m being honest.)

Caavo’s team includes those with deep expertise in hardware and media services, and it’s raised over $32 million in funding to get off the ground. The company now has 60 patents and patents-pending on its home entertainment system – something of value for a future acquirer, perhaps.

There’s a sort of obsessive, home media center geek quality to the original Caavo and now this new Control Center. It’s not perfect and even at $100, it’s still not for everyone. At the end of the day, universal remote systems feel like a luxury, not a necessity.

But Caavo has built a lot of technology here in an attempt to make difficult things feel seamless, from switching in between inputs to finding you a movie or show across streaming services then letting you launch it right in your favorite app on the device you prefer. But when it struggles or lags, you definitely notice – and wonder why you needed so many boxes in the first place.

Beyond the upfront cost, the new device requires a Control Center Service Plan of $1.99/month or $19.99/year, in order to use universal search, voice control, editorial guides, My Lists, Crowd Surfing, app launching, deep linked content, and Caavo Cache (a history and privacy feature). It’s, at least, cheaper than TiVo. 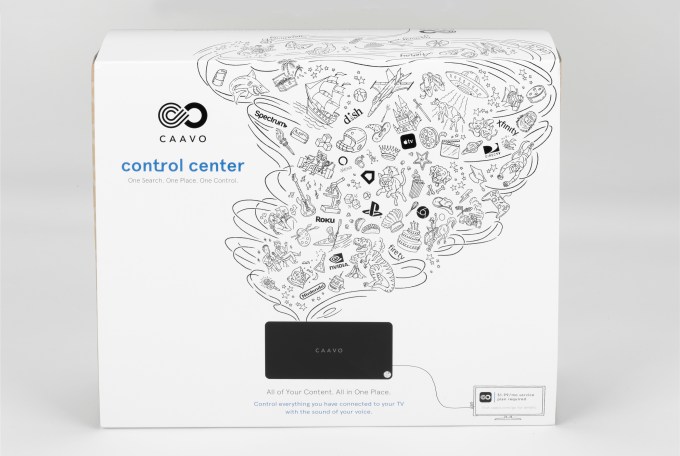 Tech specs are below.