First announced at Apple’s education event in Chicago, the company today launched on Apple Books its new “Everyone Can Create” curriculum. The curriculum joins Apple’s “Everyone Can Code” initiative by offering teachers a way to integrate into their classroom lesson plans drawing, music, filmmaking and photography.

Specifically, “Everyone Can Create” is designed to take advantage of Apple’s new 9.7-inch iPad and Apple Pencil, also introduced at the company’s event this March in Chicago. Before its introduction, only Apple’s expensive iPad Pro model offered Pencil support. The new iPad, however, is just $299 for schools, like the prior 9.7-inch device. (It’s $329 for consumers.)

The curriculum itself was built by Apple in collaboration with teachers and educators, and works alongside Apple’s built-in apps like GarageBand, iMovie, Clips and others. It’s been in preview since the news of its arrival earlier this year, with educators in more than 350 schools worldwide giving it a go. Now it’s open to all, the company says. 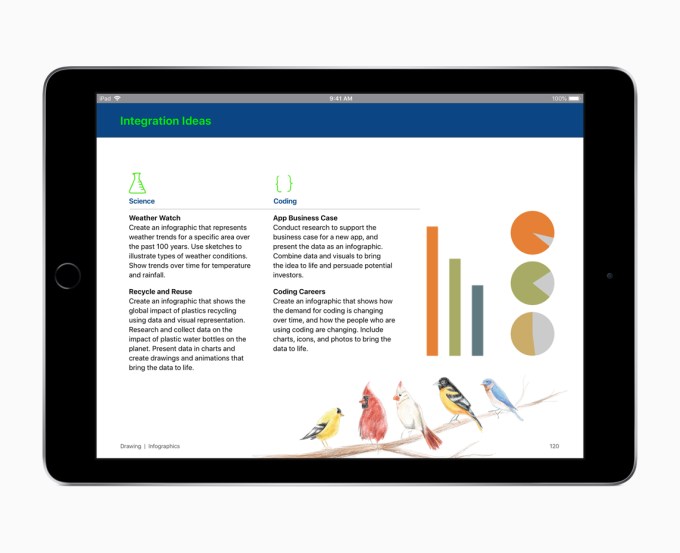 Included in the curriculum are four project guides for drawing, music, video and photos, each with a series of projects that build skills progressively. In total, there are 300 lesson plan ideas across media, projects and subjects. Not all are focused on the creative arts, to be clear. For example, a math teacher can use the iPad camera’s burst mode to capture the arc of a basketball toss to measure its parabola, the company explains in its announcement. Students can also use the camera to learn about fractals or use Apple Pencils and apps to learn about symmetry.

“We believe Apple technology can help unleash every child’s creative genius,” said Philip Schiller, Apple’s senior vice president of Worldwide Marketing, in a statement about the launch. “Working closely with teachers, we have built the Everyone Can Create curriculum to help bring creative expression and the arts into the classroom, and to help students stay engaged through creativity and ultimately be more successful.” 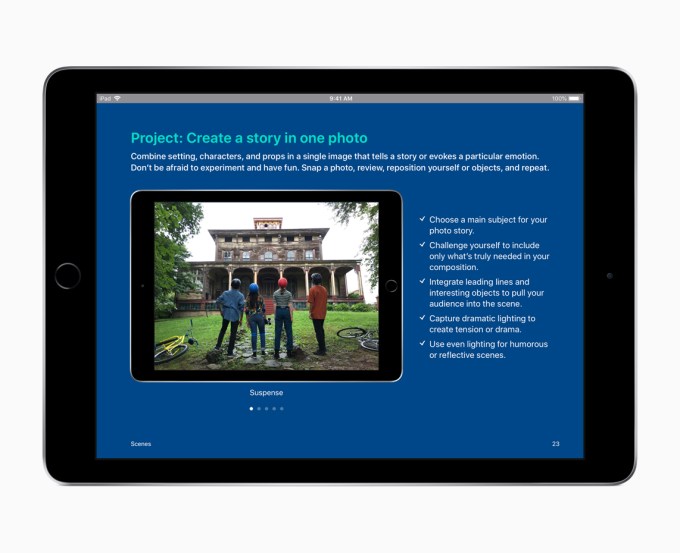 Apple has proven fairly successful with its prior curriculum, “Everyone Can Code,” which is now used by more than 5,000 schools, community colleges and technical colleges worldwide. It also offers a large library of third-party education apps for teachers to tap into — there are nearly 200,000 on today’s App Store.