In the second quarter, the adoption of smart speakers — like Amazon Echo and Google Home devices — grew to 24 percent in the U.S., up from 22 percent the prior quarter, according to new data from Nielsen, released this week. The measurement firm took a look at how consumers were using their speakers, when, as well as how many were buying multiple devices.

The firm found that 4 out of 10 smart speaker owners have more than one device — a sizable percentage that points to consumers finding enough value in their first device to add more throughout the home.

The living room is the most popular location for smart speaker placement (63 percent), followed by the bedroom (35 percent) and then the kitchen (28 percent).

This is not surprising, given that the primary use case for the devices is music streaming, with 90 percent of smart speaker owners saying they stream music at least once per week.

Searching for real-time information like weather or traffic, followed by searches for historical facts, were the next most popular activities, at 81 percent and 75 percent, respectively. News was tied for fourth place, with 68 percent listening in a typical week (68 percent also said they chatted with their assistant for fun and used alarms and timers). 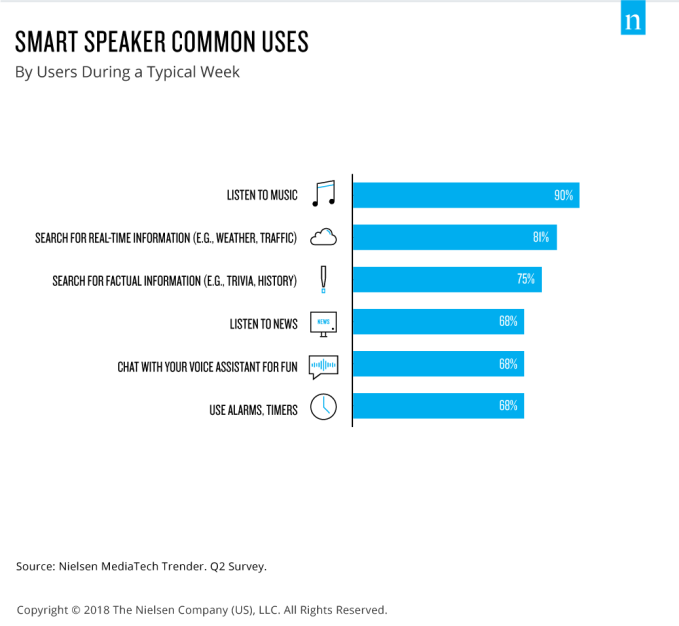 That so many people are chatting with their smart assistants, like Alexa and Google Assistant, in a more playful capacity is worth noting here. It’s not enough for these voice platforms to be good at finding and retrieving information and taking actions, they have to do that with some personality, too. Amazon has even gone so far as to give Alexa her own opinions on things like pets, beer, movies, colors and more, which change from time to time.

Smart speakers are also acting as a bit of an extension of our mobile devices, the report said. Nielsen found that consumers were syncing data from their phones to the voice-based devices for things like audio streaming (53 percent) and shopping apps (52 percent), and more. This latter figure seems to indicate that many are, in fact, using their smart devices for shopping-related activities, despite earlier reports that downplayed shopping’s connection with smart speaker devices.

A recent report from The Information, citing leaked Amazon data, claimed that consumers were not making purchases through Echo devices. However, it seems that consumers are taking a first step toward purchase — list making — through Alexa. When the sale later goes through, however, it’s on the web, mobile web or in the native app, not directly from the speaker. Whether or not that’s actually impacting sales, or just offering consumers a different way to create their purchase reminders, still remains to be seen. But there is a connection between the devices and the shopping app, this data shows.

Consumers were also found to use their smart speakers more often on weekends, and in the afternoons, increasing as it got later in the evening, the survey said. 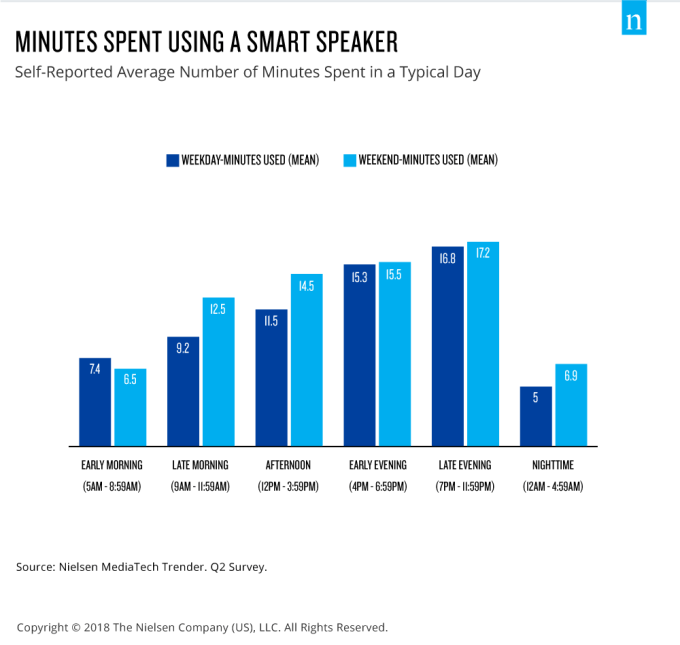 Also notable is that consumer sentiment toward their smart speakers is highly positive.

The data in the report comes from a new Nielsen consumer tracking survey called MediaTech Trender, which aims to understand consumer sentiment and behavior around emerging technologies, like smart speakers, VR and other platforms. This particular survey was conducted among 2,000 U.S. consumers, and will continue to be done on a quarterly basis.