Some users are reporting that they are unable to post today’s big story about a security breach affecting 50 million Facebook users. The issue appears to only affect particular stories from certain outlets, at this time one story from The Guardian and one from the Associated Press, both reputable press outlets.

When going to share the story to their news feed, some users, including members of the staff here at TechCrunch who were able to replicate the bug, were met with the following error message which prevented them from sharing the story.

According to the message, Facebook is flagging the stories as spam due to how widely they are being shared or as the message puts it, the system’s observation that “a lot of people are posting the same content.”

Update: After attention was drawn to it, the bug appears to be resolved, according to updates on Facebook’s Twitter account. We still don’t have more official information about how or why the behavior occurred. 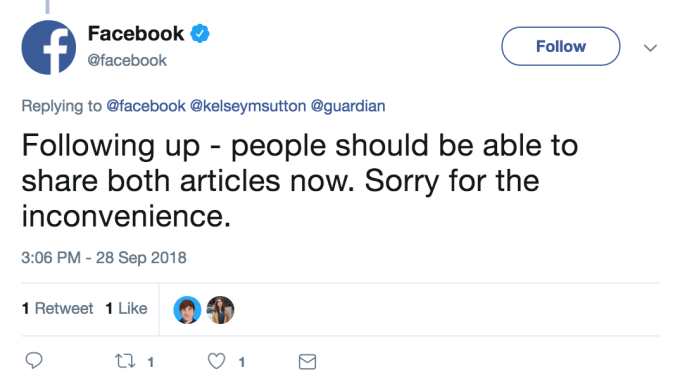 To be clear, this isn’t one Facebook content moderator sitting behind a screen rejecting the link somewhere or the company conspiring against users spreading damning news. The situation is another example of Facebook’s automated content flagging tools marking legitimate content as illegitimate, in this case calling it spam. Still, it’s strange and difficult to understand why such a bug wouldn’t affect many other stories that regularly go viral on the social platform.

This instance is by no means a first for Facebook. The platform’s automated tools — which operate at unprecedented scale for a social network — are well known for at times censoring legitimate posts and flagging benign content while failing to detect harassment and hate speech. We’ve reached out to Facebook for details about how this kind of thing happens but the company appears to have its hands full with the bigger news of the day.

While the incident is nothing particularly new, it’s an odd quirk — and in this instance quite a bad look given that the bad news affects Facebook itself.