Think Ethereum and other crypto coins are overvalued? Now you can make money when their prices fall via Compound, which is launching its money market protocol for shorting cryptocurrencies today. The Coinbase and Andreessen Horowitz-funded startup today opens its simple web interface allowing users to borrow and short Ethereum, 0x’s ZRX, Brave’s BAT, and Augur’s REP token, or lend them through Compound to earn interest.

Compound’s protocol isn’t just useful for crypto haters, or HODLers who want to generate interest instead of just having their coins gathering dust in a wallet.  “If/when Compound scales, this will lead to some really interesting improvements in market structure, namely, fairer prices” Compound CEO Robert Leshner tells me. 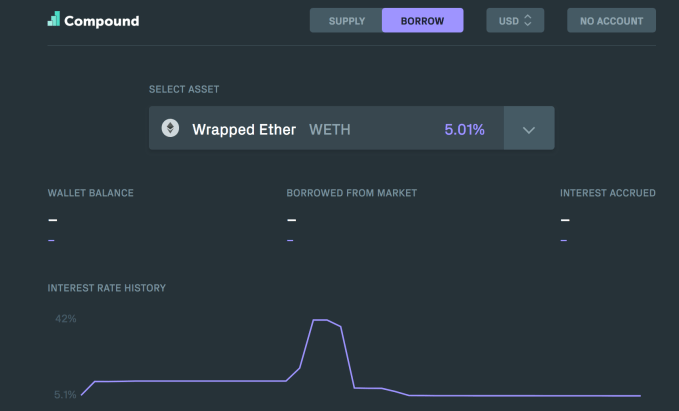 The startup spent the summer completing a security audit by Trail Of Bits and adding 26 hedge fund partners who will trade with Compound, offering liquidity to independent investors looking to be matched with borrowers or lenders. Next, the startup wants to offer a stablecoin on its protocol, bring in big financial institutions to add even more liquidity, and partner with a wallet provider to make signup faster.

Compound users visit its site through a Web3 browser such as MetaMask or Coinbase Wallet and enter their Ethereum price. They can then view the interest rates for borrowing and shorting or lending and earning interest for each of the supported tokens. Compound’s secret sauce is that those interest rates are set algorithmically based on demand, though eventually it wants a community governance body to oversee this process. “It ranges from 5 percent to 45 percent APR depending on how scarce liquidity is . . . in general, we expect supply to outnumber borrowing about 5-1, and borrowing rates to be about 10 percent”.

To make sure no one thinks they’re getting scammed, Compound is also releasing a transparency dashboard users can view to check up on all the assets moving through the protocol and see what Compound is earning. It charges 10 percent of what borrowers pay in interest, with the rest going to the lender. That margin is what attracted the $8.2 seed round for Compound that also included Polychain Capital and Bain Capital Ventures. 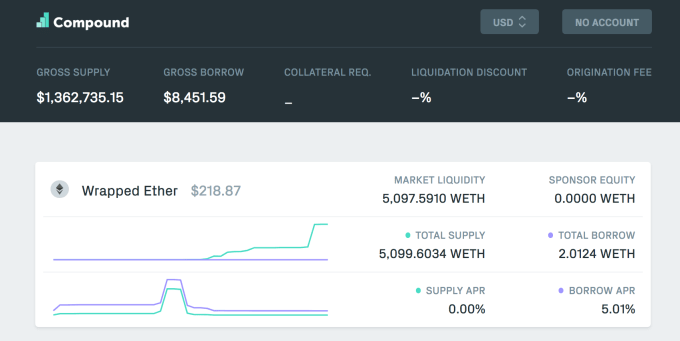 It could also make crypto exchanges like Coinbase or Robinhood less attractive to users because leaving their coins there comes with the opportunity cost of not lending them for profit. Meanwhile, shorts could pop the volatile crypto bubble and push prices to more sensible and stable levels. That’s market health is a critical precursor to big banks and traditional investors diving into crypto.