Amazon is taking full advantage of its deal to live stream Thursday Night Football games, which it snagged the rights to earlier this year. The company will this year launch a TNF pre-game show, co-stream the games on its video game streaming site Twitch, and will leverage Prime Video’s “X-Ray” technology to give viewers access to real-time stats, team info, and the ability to shop for team merchandise on Amazon.com.

X-Ray for Prime Video typically offers viewers information about cast and characters in a TV program or movie, as well as info about the music and, sometimes, additional trivia.

In the case of TNF, however, the focus will be on the players and teams.

With the start of the games today, September 27, at 8:20 PM ET, X-Ray on Prime Video will debut a new experience across Fire TV devices, including Fire TV Cube, 4K, Fire TV, and Fire TV Stick, which will give fans live stats and player information, without taking them away from the action.

Instead, viewers will be able to push the “up” button the Fire TV remote to see information like Game Leaders and Team Stats to track top players rushing, passing, receiving, and more. They can deep dive into a favorite team through the new “Teams” tab to learn facts like who owns the team, or how many Super Bowls they’ve won, among other things.

While these options are largely repurposing Amazon’s X-Ray feature and putting it to use for sports, the “Shop” option takes things a step further.

Amazon will now allow U.S. viewers to shop its site via X-Ray for things like team hats, t-shirts and other gear – all right from the TV screen.

This isn’t the first time Amazon has tried to blend TV viewing with shopping. It also launched a TV app in the past and even tried a watch-while-you-shop show, Style Code Live, which it later canned. During this year’s Prime Day, it ran QVC-style videos for selected products. But X-Ray isn’t typically used for shopping.

Also new this year to the stream is the option for all-female audio commentary from sports journalists Andrea Kremer and Hannah Storm. Amazon said this is the first time two women commentators have covered an NFL game in its entirety.

The option will be joined by others, including a Fox Sports commentary from Joe Buck and Troy Aikman, plus a Spanish-language feed, and a U.K. English feed. 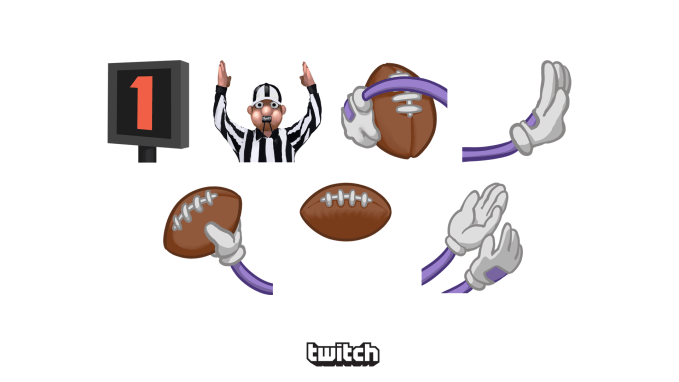 Meanwhile, over on Twitch (which Amazon owns), the game will be live-streamed on the Prime Video channel, where it will include interactive extensions.

Instead of X-Ray, there will be an overlay featuring similar real-time stats, including NFL standings and team stat pages.

Viewers will aso be able to chat using NFL emojis (Twitch’s emotes), that include team logos and other Twitch originals, like those for touchdowns, flags, catching and running with the ball, and more.

The popular Twitch streamer GoldGlove will also co-stream the game with his own commentary on September 27.

Amazon and Twitch will stream 11 TNF games this season across over 200 countries, starting tonight with Vikings vs. Rams at 8:20 PM ET, following the pre-show at 7:15 PM ET.