Oculus showed off the future of working in VR today. Rather than just splaying out 2D software on an infinite desktop, the new Oculus Hybrid Apps system lets you see both 2D screens and 3D models in VR at the same time. That means you could use a traditional image editing suite to change the look of a piece of a 3D object while also being able to rotate, move, and look around that object.

Hybrid Apps were announced at the Oculus Connect 5 conference today in San Jose where Facebook also revealed the new Oculus Quest headset, forward compatability for Oculus content, a mobile app for discovering and remotely installing software on the Rift, and the debut of the YouTube VR app on Oculus Go.

Hybrid Apps are built atop the Oculus Dash virtual desktop system announced last year. In this demo, you can see an artist using the 2D Substance Painter software to polish the colors and textures of a 3D robot model while being able to see changes live.

Oculus showed off a wide array of other new software today. Your Sims-style customizable Oculus Home can now sport Custom Developer Items so you can earn (or maybe one day buy) 3D goods within games. Earn an airship in a flying game, and that airship can float inside your Oculus Home when you’re done playing. The feature could let you build your own trophy wall, making those in-game achievements a lot more tangible. 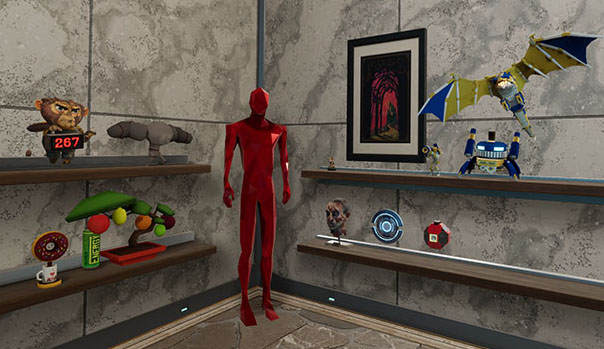 Each year Oculus shows off the newest versions of its Avatars system that lets you create in-VR visual identity. They’re getting more lifelike thanks to additional hairstyles, skin tones, and accessories. And later this year, Oculus will launch Expressive Avatars that use its research on simulated eye and mouth movement as well as microexpressions to make them feel real.

Overall, Oculus Connect 5 felt a bit anti-climactic. Facebook has a lot of scandals distracting from its VR efforts while also triggering more scrutiny of any choices it makes related to privacy. What once might have been seen as mildly creepy now triggers damaging press cycles. Facebook ended up adding a privacy shield to cover the lens of its upcoming Portal video chat screen, Cheddar’s Alex Heath reports.

Combined with slow adoption of VR, it seems like there is less and less progress between Oculus’ annual conference. Instead of big advances in avatars, we get cosmetic upgrades and reveals of changes that won’t arrive for months. The newest Oculus Quest headset looks pretty similar to its previous prototypes.

At this point, the necessary technology for satisfactory VR has largely arrived. It’s now on Oculus and its legion of developers to build products and experiences that are simple, affordable, and impressive enough to be worth the hassle of face computing.