After months of speculation, Bitmain — the world’s largest provider of crypto miners — has opened the inner details of its business after it submitted its IPO prospectus with the Stock Exchange of Hong Kong. And some of the growth numbers are insane.

The document doesn’t specify how much five-year-old Bitmain is aiming to raise from its listing — that’ll come later — but it does lift the lid on the incredible business growth that the company saw as the crypto market grew massively in 2017. Although that also comes with a question: can that growth continue in this current bear market?

The company grossed more than $2.5 billion in revenue last year, a near-10X leap on the $278 million it claims for 2016. Already, it said revenue for the first six months of this year surpassed $2.8 billion.

Bitmain is best known for its ‘Antminer’ devices — which allow the owner to mine for Bitcoin and other cryptocurrencies — and that accounts for most of its revenue: 77 percent in 2016, 90 percent in 2017, and 94 percent in the first half of 2018. Other income is generated by its mining farms, shared mining pools, AI chips and blockchain services.

The company is fabless, which means it develops its own chip design and works with manufacturing partners who bring them to life as physical chips. Those chips are then used to power mining hardware which lets the owner earn a reward by mining Bitcoin and other cryptocurrencies. Bitmain claims over 80,000 customers with just under half of sales in China and the rest overseas. 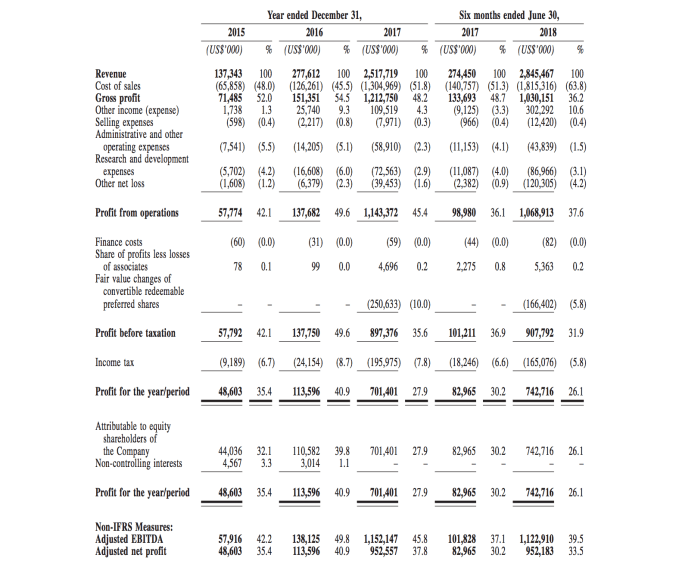 That’s quite staggering growth, but there are some signs that 2018 comes with more challenges.

Bitmain is trying to bat away those concerns by using H1 2018 figures, rather than splitting that period into two quarters. That’s important because the crypto market has plunged massively since January, losing more than half of its value. That has impacted most crypto companies — whether it is exchanges seeing less trading or wallets less traffic — and it is sure to have had a toll on Bitmain.

The question is to what extent?

That’s crucial because it is what will give this IPO momentum, but Bitmain isn’t playing ball and showing us the full picture. 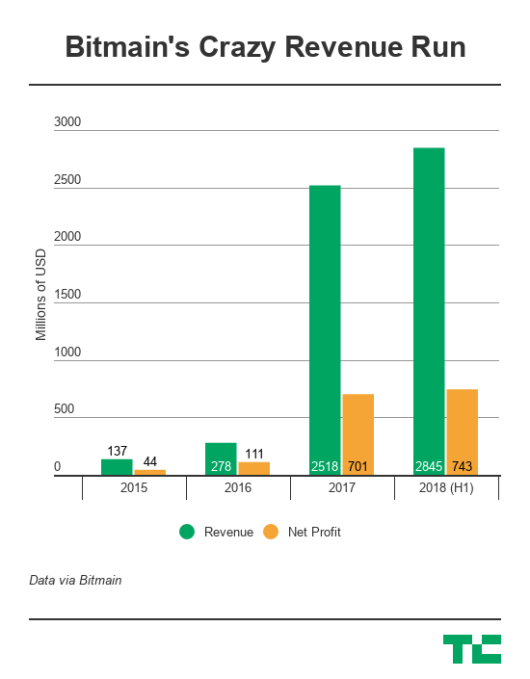 Interestingly, Bitmain accepts Bitcoin and other cryptocurrencies as payment for its miners, with some 27 percent of purchases last year paid for using crypto. As a result, those payments aren’t included in revenue but do show up as “investing cash inflow” when they are converted to fiat and used in the business. That’s a 2018 accounting problem right there.

The wild ride of 2017, however, led the company to over-estimated demand and, as a result, its inventory ballooned by $1 billion.

Here’s Bitmain explanation of how it managed to get it so wrong:

In early 2018, we anticipated strong market growth for cryptocurrency mining hardware in 2018 due to the upward trend of cryptocurrencies price in the fourth quarter of 2017, and we placed a large amount of orders with our production partners in response to the anticipated significant sales growth. However, there had been significant market volatility in the market price of cryptocurrencies in the first half of 2018. As a result of such volatility, the expected economic return from cryptocurrency mining had been adversely affected and the sales of our mining hardware slowed down, which in turn caused an increase in our inventories level and a decrease in advances received from our customers in the first half of 2018. Going forward, we will actively balance our business growth strategy, inventories and cryptocurrency asset levels to ensure a sustainable business growth and a healthy cash flow position, and we will adjust our procurement and prediction plan to maintain an appropriate liquidity level.

Despite an extra $1 billion in inventory, Bitmain estimates it has the working capital — including crypto pile and the result of its IPO — to sustain operations for at least another 12 months. That, according to its figures, is around $343 million in cash and cash equivalents but clearly it needs another megahit product or for the market demand to rise again.

Indeed, Bitmain just last week announced its newest mining chip — shrunk down to 7nm — which it believes will offer more power and greater efficiency for miners. That progress coupled with the rising value of crypto — i.e. what owners of Bitmain miners can earn — has helped the company steadily raise the price of its hardware. 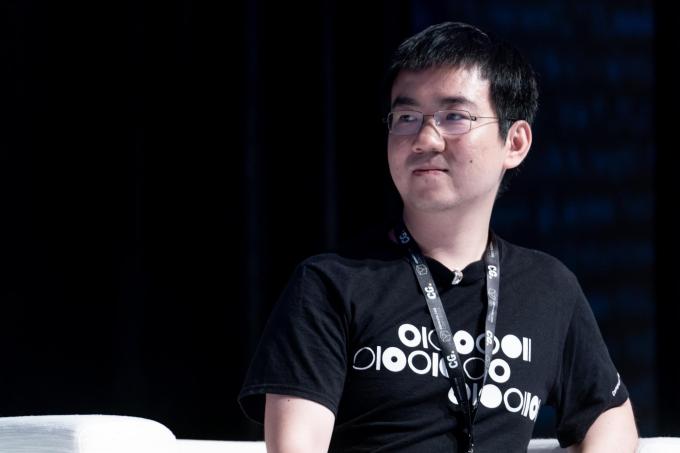 Beyond mining, the company is also developing AI chips, the first of which launched last year. They are used for developing cloud systems, as well as object, image and facial recognition purposes.

Citing third party figures, Bitmain claims to have a dominant 75 percent of the ASIC mining hardware market. It is investing heavily in R&D, which reached $73 million last year and $86 million during the first half of 2018. In addition, around one-third of its 2,594 employees are listed as working in research and development. 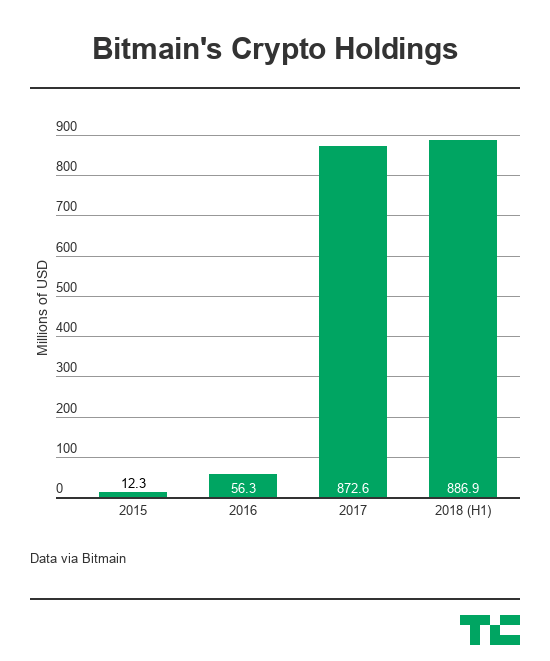 Bitmain’s document confirms the company raised some $784 million across Series A, Series B and Series B rounds.

Its investor roster is fairly public thanks to leaks and it includes the likes of IDG, Sequoia China, and Kaifu Lee’s Sinovation fund. However, the prospectus does confirm that shareholders include retailer NewEgg, EDBI — the corporate investment arm of Singapore’s Economic Development Board — and Uber investor Coatue. Founders Ketuan Zhan and Jihan Wu are the largest shareholders and they control 36 and 20 percent, respectively.

We can expect Bitmain to flesh out the prospectus with more juicy information, including a target raise which will also generate its valuation. But for now there are over 400 pages of information to process, you can find them all right here.

Note: The original version of this article has been updated to correct the figures for Bitmain’s crypto holdings.

Editorial note: The author owns a small amount of cryptocurrency. Enough to gain an understanding, not enough to change a life.