Snapchat is a college favorite more than a high school phenomenon. Only 20 percent of Snapchat’s US users are under 18, down from 22 percent in 2016 as some of its early adopters have now aged up and headed to college. Appealing to older users was a big motive for its otherwise-disastrous redesign that does a better job of labeling navigation buttons to stop confusing adults.

Now Snapchat is fully embracing the responsibility of getting the vote out to its core of 18 to 24 year olds which sadly saw low voter turnout of just 17.1% in the 2014 midterms. As part of Voter Registration Day today, it’s partnering with non-profit TurboVote to put links to register across its app in both English and Spanish. 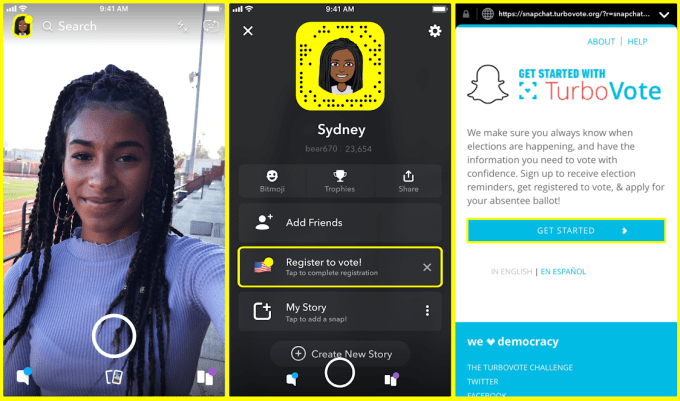 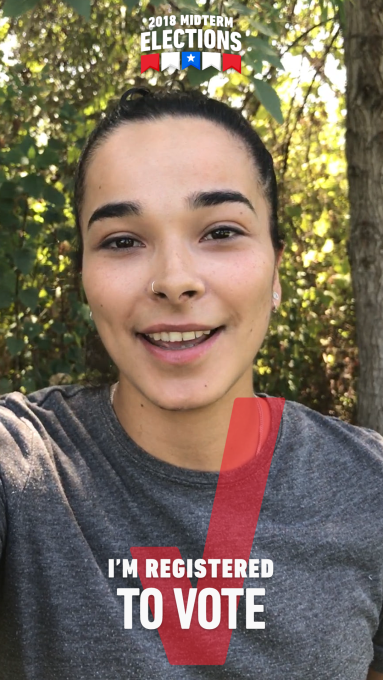 Today, all 18+ US users will see a TurboVote link to register in the profile portion of their Snapchat app. That spot is a little buried compared to the camera and messages/Stories tabs, so Team Snapchat is also sending them all a video message full of people noting common activities like “opening your locker” that take longer than voting which lets them swipe up to register.

Meanwhile, publishers including Washington Post, NowThis, Mic, Vice, Refinery29, Mitu, Cheddar, and Good Luck America will put swipe-up-to-register options in their relevant election coverage. Snapchat’s own news team of curators will be compiling Our Stories about election issues and voting, and like last year, Snapchat will offer themed creative tools including an “I’m Registered To Vote” filter. They all offer the swipe-up registration option that can be completed inside Snapchat’s app.

With 100 million monthly and 80 million daily users in the US and Canada, Snap has the potential to get more of the youngest voters to the polls. A Harvard University’s Institute of Politics Youth Poll is optimistic, finding that 37% of Americans under 30 say they’ll ‘definitely be voting’ versus 23% who said so in 2014. This demographic sees “corruption” as a defining characteristic of the US government and could seek to further disrupt the political establishment.

TurboVote has become the defacto partner in this industry-wide initiative, as it also powers registration signups through Facebook and Instagram. While those competitors put a bigger notice atop their apps, they’re then mostly running ads to promote voter registration whereas Snapchat is integrating the initiative organically across its product.

After a year of tech companies trying to defend against foreign interference in elections, they all seem comfortable getting involved in voter registration drives. The question is whether these will become talking points at some future congressional hearing about how they skewed elections by driving voting disproportionately amongst younger citizens. Getting more people involved in democracy clearly seems positive on its face, but politicians looking for issues to drum up with have made a whipping boy out of the social networks.