There are few stories as important right now as the internet being ripped asunder by the increasing animosity between the U.S. and China. Eric Schmidt, the former chairman of Alphabet, said last week at a private event in San Francisco that “I think the most likely scenario now is not a splintering, but rather a bifurcation into a Chinese-led internet and a non-Chinese internet led by America.”

He should know: Alphabet and its Google subsidiary are on the front lines of that split, experiencing a massive furor over the company’s Project Dragonfly to launch a censored search engine in the Middle Kingdom. It’s hardly alone though, with Apple facing militant criticism from Chinese netizens over its iPhone presentation and Facebook finding its application for a corporate entity on the mainland being returned and rejected.

At the heart of this split is the death of the internet as we once knew it: a unified layer for the transfer of human knowledge. As the internet has gained more and more power over society and our everyday lives, the need by governments worldwide to tame its engineering to political and moral ends has increased dramatically.

About four years ago, I wrote a piece called “From internet to internets” in which I argued that this sort of split was obvious. As I wrote at the time: “Across the world, it is becoming abundantly clear that the internet is no longer the independent and self-reliant sphere it once was, immune to the peculiarities of individual countries and their laws. Rather, the internet is firmly under the control of every government, simultaneously.”

Yet, the rules that countries like Spain put in place around media and news didn’t split the internet as I had predicted. The economic power of the U.S. and China did. Alibaba, Tencent, and Baidu may have declined in value this year, but their combined market caps is still in the trillions of dollars. WeChat, which is owned by Tencent, has more than a billion users, and while only 10% of its user base is estimated to be outside China, the ties are growing as more countries build economic bridges with the mainland.

Sometimes, those bridges are quite literal. Through the Belt and Road initiative and fledgling institutions like the Asian Infrastructure Investment Bank, China has provided massive outlays to other nations primarily around infrastructure, building partnerships and deepening economic ties. 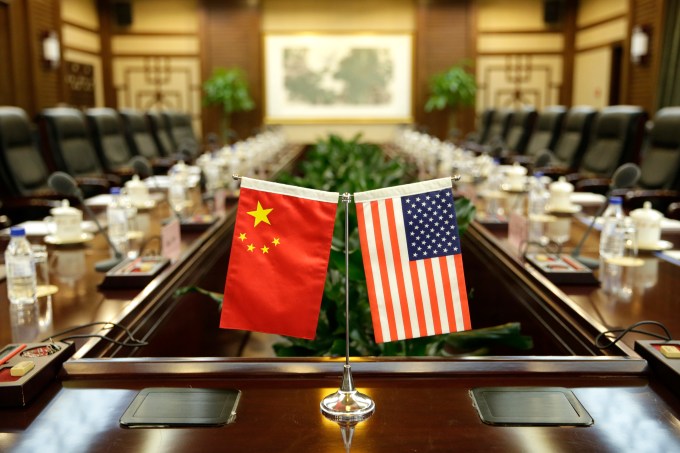 China and the U.S. are increasingly fighting a global battle for tech legitimacy (Photo by Jason Lee / AFP / Getty Images)

That infrastructure is sometimes roads, but it can also be in areas like telecommunications. Huawei has made massive inroads into Africa, both in smartphones and in core infrastructure. Chinese-owned Transsion, which most Westerners have probably never heard of, is the dominant smartphone manufacturer on the continent.

Chinese-made telecom infrastructure. Chinese handsets. Increasingly Chinese apps. For all of the concerns of Congress and national security officials about Huawei and ZTE equipment entering the American or Australian markets, the real fight for the future of the internet is going to be in precisely these developing regions which have no incumbent technology.

That’s what has made the Trump administration’s strategy toward trade negotiations with China so miserable to watch. The focus has been on repeated rounds of tariffs that will ensure that Chinese goods — particularly in high-tech industries — are more expensive to American consumers, allowing domestic manufacturers to better compete. Yet, the policies have done nothing to ensure that American values around the internet are exported to continents like Africa or South America, or that Cisco’s equipment will be chosen over Huawei’s.

That might be changing at long last. The Financial Times reported yesterday that the Trump administration is preparing to double down on the Overseas Private Investment Corporation, which offers commercial lending facilities to developing countries. It would be merged into another agency and given a much more rich budget (as high as $60 billion) to go and compete with Chinese financing around the world.

Maybe that measure will be successful in closing the strategic distance between the two countries. Maybe rumors that the administration is going to broadly double down on the trade war will lead to a much more comprehensive set of policies.

But along the way, regardless of what happens, these skirmishes will lead to a fracturing of the internet, and along with it, the death of the internet as a bastion and voice of freedom and knowledge for all people everywhere.