Amazon’s Echo Dot may have been a bestseller on Prime Day, but Google’s Home Mini device is now the top-selling smart speaker worldwide, according to a new report out this morning from Strategy Analytics. The analyst firm says Google’s small speaker accounted for 1 in 5 smart speaker shipments in Q2 2018, edging out the Echo Dot with its 2.3 million global shipments compared to Echo Dot’s 2.2 million.

Combined, these two entry-level smart speakers – the Echo Dot and Home Mini – accounted for 38% of global shipments, the firm found. 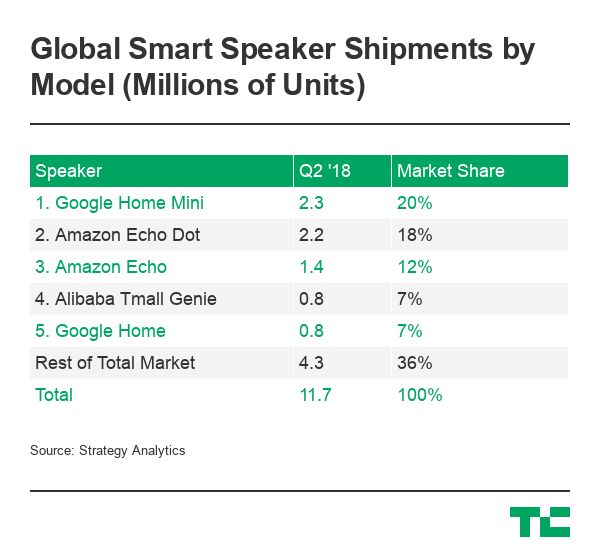 In total, 11.7 million smart speaker devices were shipped during Q2, with 4 out of the top 5 devices coming from either Amazon or Google.

Apple’s HomePod wasn’t ranked in the top five, but took a 6% share of the shipments in Q2.

However, HomePod’s premium focus and higher price tag allowed it to take a sizable chunk of smart speaker revenue during this period.

While the Home Mini and Echo Dot combined accounted for 17% of smart speaker revenues, Apple’s HomePod alone took a 16% share of wholesale revenues. And in terms of devices above the $200 price point, the HomePod had a 70% revenue share.

Strategy Analytics’s report also indicated this growing market is still in flux, thanks to expected new arrivals which could impact the shares held today by existing players.

“The number of smart speaker models available worldwide has grown significantly over the last twelve months as vendors look to capitalize on the explosive market growth,” said David Mercer, Vice President at Strategy Analytics, in a statement. “Heavyweight brands such as Samsung and Bose are in the process of launching their first models, adding further credibility to the segment and giving consumers more options at the premium-end of the marker,” he added.