The large, legacy car industry has pinned a lot of hopes and dreams on innovative startups to build the next generation of automotive technology, and today the latest chapter in that story was revealed. WayRay, a Zurich-based developer of holographic augmented reality technology and hardware — used in head-up displays that project images into a driver’s field of vision — has raised $80 million of funding, a Series C led by Porsche, with Hyundai Motor, previous investor Alibaba Group, China Merchants Capital, JVCKENWOOD, and several sovereign wealth funds also participating.

WayRay says it will be using the funds to bring its display technology to market by way of OEM deals with carmakers, projected for next year, with longer term plans including building tech for other kinds of displays like windows: 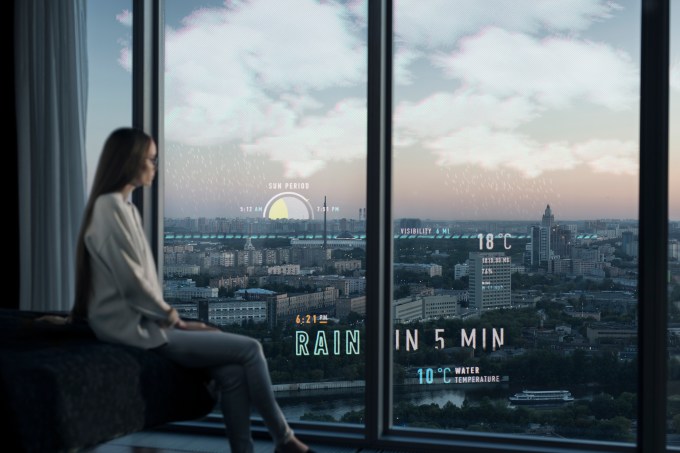 WayRay has been around for five years and its products are still only in the prototype stage — albeit being widely shown off — but its valuation has seen a significant bump, with a source close to WayRay telling us it is now $500 million. Meanwhile, in an interview, WayRay’s founder and CEO, Vitaly Ponomarev, projects that when commercial rollout commences on its products — which it expects to do next year — that figure will likely double.

“The lifecycle of our product is pretty long,” Ponomarev said. “We are just now becoming a certified supplier to the automotive industry but that takes time. We are aiming to become a tier-two supplier by next year. The contracts should be signed beginning of next year and that should help with valuation.” He said that the company has been contacted by “all the major car manufacturers.”

(For some more financing context, the company has officially raised $110 million, but our source said that unofficially, it’s actually raised $140 million, with some investors asking to keep their backing quiet for now.)

The market for automotive head-up displays was estimated to be worth as much as $560 million last year, with that number growing to over $1 billion by 2023. Companies like WayRay are going head-to-head with the likes of Continental, Panasonic and others to meet a demand for these systems, which will serve a couple of different purposes: providing assistance to drivers of vehicles, and providing additional information and entertainment to passengers (and potentially drivers in autonomous cars).

Ponomarev said that his company will be launching an SDK in two weeks to help build apps for both of these use cases.

WayRay as a company is spread across two countries that have been strong for AI, specifically computer vision talent, and in-car safety systems. A large part of WayRay’s R&D and its first factory (for prototyping) are in Moscow, Russia (it counts the Russian Direct Investment Fund as a key investor), and it also has a second base in Switzerland, currently Zurich — recently relocated from Lausanne to be closer to the German border and the automotive companies that are based there. Germany will also be where it builds its first factory to produce commercial parts. The second is planned for Shanghai, where there is currently only a sales office.

We gave a little rundown of WayRay’s technology when we came across it last year at CES and said it restored our faith in the potential of a head-up display because of its clarity and range. There have been a number of HUD makers on the market — and, I should add, a number of disappointments such as Navdy and iScout — but WayRay is taking a different approach from many of these, by focusing on holographic AR technologies rather than screen-reflections or in-built displays.

Ponomarev said this extends the company’s expertise not only into software, but also cutting-edge laser technology and material science (developing new polymers). WayRay is not the only company working in holographic HUD, but he believes it may be the most advanced. “We are the number-one in the world in terms of patents,” he added, with systems that are potentially 20 times smaller than those currently being made.

WayRay’s focus today is on embedded HUD systems — that is, technology and hardware that will be built into vehicles — but that is a somewhat recent focus. Just earlier this year, it was also building a second line of business in aftermarket hardware — that is, systems that can be purchased and used with any vehicle.

One issue with aftermarket is the extreme levels of competition, even if the basic technology is not exactly the same. “There are dozens of companies appearing in countries like China and that is killing the aftermarket HUD business,” Ponomarev said. “The simple reason is because there is no [unique] technology inside.”

Another problem with aftermarket is the need for to build sales channels.

“You lose a lot of margin through the retail chain,” he said. “But if you don’t have any competition in the OEM channel” — as WayRay claims is the case for it right now — “that is a gold mine. Customers are just waiting in line until you have time to work with them. High regulations [from forging into a new area of technology and automotive business] is a downside, but the upside is so high that we made a pivot from the aftermarket to embedded because we have the right technology.”

All the same, there are still hurdles that WayRay will have to surmount in order to realise the success is feels is so within reach. There are still a wide variety of physical layouts for cars that change how a holographic display can behave, and there is a constant tension between building hardware that takes up less space but provides the largest pictures.

Another is taking into account what the cars are already capable of doing. Some models already have advanced driver systems, multiple sensors and the rest that will make rendering pictures on WayRay’s systems very fast. Others do not, and means WayRay will have to figure out how to source that data through its own hardware, making for more complicated and expensive tech.

However, the payoff if these different boxes can be ticked is a big one.

Porsche sees the opportunity to use WayRay’s tech not just to assist drivers and offer them the latest bells and whistles in their already highly-specced vehicles, but also a way to potentially offer more services down the line, for example e-commerce by way of Alibaba.

“We are convinced that by joining forces we will in future be able to offer our customer solutions as standard of what our customers expect of Porsche,” a spokesperson said.

“The WayRay team has unique expertise with a solid background in space engineering, hardware and software development,” said Lutz Meschke, Deputy Chairman of the Executive Board and Member of the Executive Board for Finance and IT at Porsche, in a statement. “Their innovative ideas and products have great potential. We are convinced that on this basis we’ll be able to offer our clients customized Porsche solutions. That is why we have made this strategic investment decision.”

And that extends also to strategic investments for other applications of the tech longer term.

“WayRay has remarkable expertise in both hardware and software development for holographic AR display systems,” said Dr. Youngcho Chi, Chief Innovation Officer and Executive Vice President of Hyundai Motor Group, in a statement. “The Hyundai–WayRay collaboration will help us establish a brand new eco-system that harnesses AR technology to enhance not only navigation systems but establish an AR platform for smart cities and smart buildings, which are Hyundai Motor Group’s new business interests, in the long term, providing innovative customer experiences to our drivers.”