I’m not going to lie, when Studio Banana released the original Ostrichpillow back in 2012, despite breaking all Kickstarter records at the time, I thought the whole thing might be an elaborate joke. Or, worse still, since the sleep-at-your-desk styled product had found popularity amongst people who worked at startups, Silicon Valley was now parodying itself.

Except that “transformative” design company Studio Banana is based in Europe, with offices based in London, Lake Geneva and Madrid. And 500,000 sales and five products later, the joke is arguably on its critics. As I’m fond of telling founders who ask for validation, ultimately it is the market that decides.

Enter the latest Ostrichpillow creation: the aptly named Ostrichpillow Hood. Aptly named because, well, it’s a hood. However, unlike the previous products in the range, which were designed to facilitate sleep in non-traditional places, the Ostrichpillow Hood, we’re told, is to be used in “everyday waking life”.

Specifically, by reducing the ability to see activity in the edges of your field of vision, it is intended to help you focus on the task at hand and/or reduce overstimulation, such as the kind induced by open plan co-working spaces. 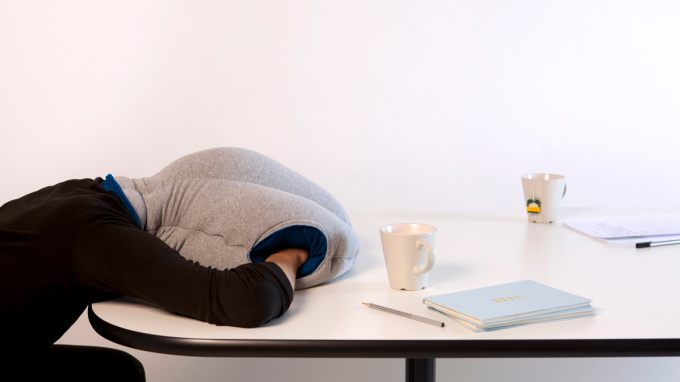 I suggest that the Ostrichpillow Hood may turn out to be broadly socially acceptable, not least for anyone already familiar with the original Ostrichpillow, but also because asking work colleagues to respect the need to focus is a lot different to asking them to ignore your need to take a nap at your desk. Ganjavian doesn’t degree, even though there is no doubt the two products share the same design heritage.

“A lot of the stuff we are thinking about now is about the state of mind,” he says, noting that throughout the working day we are bombarded with stimuli and information, from messaging apps, emails, social media, meetings and even something as innocuous as having to say hello to work mates. “[The Ostrichpillow Hood] is really about sheltering. It is not only a physical movement, there is psychology in the way it shelters you… it’s about shifting your mood”.

Next Ganjavian demonstrates the three positions the Ostrichpillow Hood is designed to be worn.

The ‘Hood’ position is for when you need to concentrate on something in public, for example when commuting or in an open plan office or coffee shop. Like wearing a pair of visually loud headphones, it also has the added effect of signalling to colleagues that you’d rather not be disturbed or are “wired in“.

The ‘Eclipse’ position, where the hood can be turned around to cover your face completely, is for when you need to truly switch off from your surroundings, such as to deeply think, take a short break or meditate. “If I’ve got my headphones on in that posture then what it allows me to do is to totally isolate myself in the same way I would with an Ostrichpillow but in a much more acceptable way,” says Ganjavian.

Finally, the ‘Hoop’ position, with the hood worn down around your neck, is designed to feel warm and cozy and turns the Ostrichpillow Hood into attire more akin to a fashion accessory.

Adds the Studio Banana co-founder: “What I find really exciting about this moment is that I currently work in between three different geographies, there is so much going on, and how do we create a tool or object that makes me feel good, helps me perform better, and helps me become more efficient, and also feeds that overall well-being that I’m looking for in my workplace. At the same time, I can just walk out into the street with it on and just go home and feel good about it”.