Microsoft HoloLens mixed reality glasses have always been interesting technology, but it’s never been clear how the company would move from novelty device to actual viable business use cases. Today, it made a move toward the latter, announcing a couple of applications designed to put the HoloLens to work in Dynamics 365, giving it a real business purpose.

Dynamics 365 is Microsoft’s one-stop shop for CRM and ERP, where a company can work on some of its key business software functions including field service in an integrated fashion. The company has been looking at for HoloLens to bring computing power to a group of field workers like repair technicians for whom even a tablet would be awkward because they have to work with both hands free.

For these people, having a fully functioning Windows 10 computer you can wear on your face could be a big advantage and that’s what Microsoft is hoping to provide with HoloLens. The problem was finding use cases where this would make sense. One idea is providing remote assistance for people out in the field to get help from subject experts back at the office, and today the company announced Dynamics 365 Remote Assist.

In this scenario, the worker is wearing a HoloLens either to understand the repair scenario before they go to the site or to get remote help from a subject expert while they are at the site. The expert  can virtually see what the technician is seeing through the HoloLens, and walk them through the repair without leaving the office, even circling parts and providing other annotations in real time. 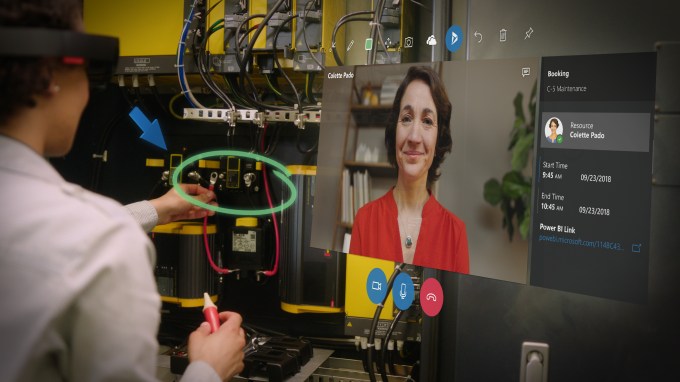 Microsoft Remote Assist in action with expert walking the technician through the task. Photo: Microsoft

Microsoft is not the first company to create such a solution. ScopeAR announced RemoteAR 4 months ago, a similar product, but Microsoft has the advantage of building it natively into Windows 10 and all that entails including data integration to update the various repositories with information after the repair is complete.

The other business scenario the company is announcing today is called Dynamics 365 Layout. A designer can create a 3D representation of something like a store or factory layout in CAD software, view the design in 3D in HoloLens, and adjust it in real time before the design goes live. As Microsoft’s Lorraine Bardeen, who has the cool title of General Manager for Microsoft Mixed Reality says, instead of creating cardboard mockups and adjusting your 3D CAD drawing on your computer as you find issues in your design, you can put on your HoloLens and make adjustments in a virtual representation of the layout and it adjusts the CAD drawing for you as you make changes. 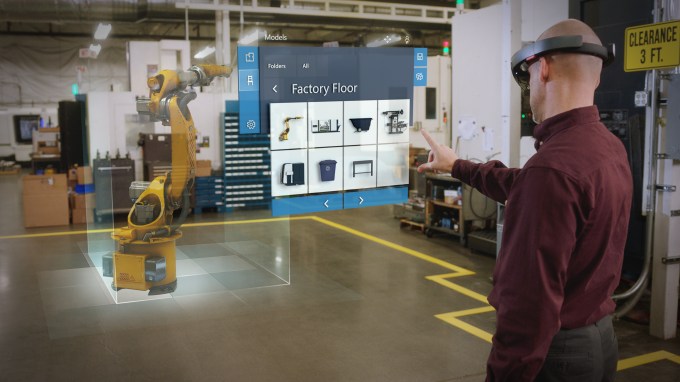 Laying out the pieces on a factory floor using Dynamics 365 Layout. Photo: Microsoft

Bardeen says the company has worked with customers to find real-world use cases that would save time, effort and money using mixed reality with HoloLens.  They cite companies like Chevron, Ford and ThyssenKrupp Elevators as organizations actively embracing this kind of technology, but it still not clear if HoloLens and mixed reality will become a central component of business in the future. These two solutions GA on October 1st and we will begin the process of finding out.