Asia’s fintech scene is poised to get a little larger after Jumo, a company that offers loans to the unbanked in Africa, revealed plans to expand into the continent. To get the ball rolling, Jumo has opened an office in Singapore to lead the way and landed a massive $52 million investment led by banking giant Goldman Sachs to fuel the growth.

The new round takes Jumo to $90 million raised from investors. While Goldman is the lead — and standout name — the round also saw participation from existing backers that include Proparco — which is attached to the French Development Agency — Finnfund, Vostok Emerging Finance, Gemcorp Capital, and LeapFrog Investments.

Jumo launched in 2014 and it specializes in social impact financial products. That means loans and saving options for those who sit outside of the existing banking system, and particularly small businesses. To date, it claims to have helped nine million consumers across its six markets in Africa and originated over $700 million in loans. The company, which has some 350 staff across 10 offices in Africa, Europe and Asia, was part of Google’s Launchpad accelerator last year and it is led by CEO Andrew Watkins-Ball, who has close to two decades in finance and investing.

Watkins-Ball told TechCrunch that he believes Jumo’s experience working in Africa sets it up perfectly to offer similar services in markets across Asia.

“We grew up in a very tough play yard,” he said in an interview. “We built our initial success in Tanzania which is probably one of the hardest [financial] markets in the world. A lot of these environments [in Asia] look more attractive.”

Unlike the West, where challengers are trying to unseat banks, fintech startups in emerging markets work with the existing system. That isn’t some cop-out, it actually makes perfect sense. Banks simply aren’t equipped to deal with customers seeking small loans in the hundreds of U.S. dollar bracket. 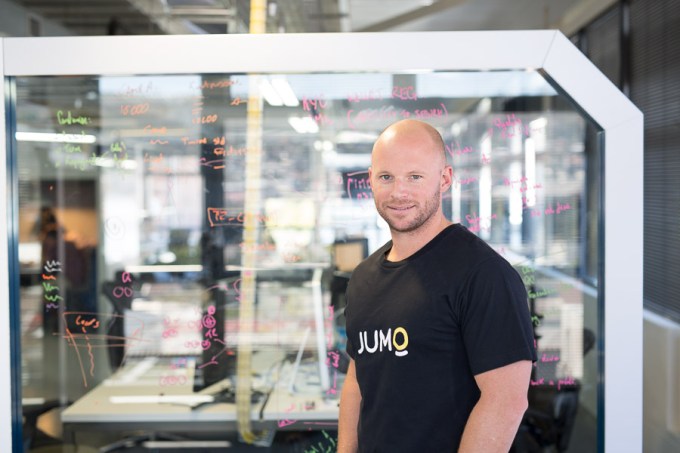 Financially, the returns aren’t there from these customers and it doesn’t make sense for banks to invest resources sounding out a prospective loan. Even if they wanted to, they couldn’t vet these would-be customers, though. Many emerging markets simply don’t have the formalized credit checking systems that exist in the West, while many of the unbanked (or ‘less banked’) consumers wouldn’t even show up if they did due to a range of factors.

That’s where a new approach is needed. Fintech startups essentially act like a funnel. They manage the customer acquisition and retention, develop systems to assess credit based on alternative signals and, over time, build up a customer profile that reduces credit risk. That suits banks because they don’t need to handle the nitty-gritty and, when it works well, the startups bring them larger enough volumes of small loans that are a worthwhile opportunity for financial institutions.

Just looking at recent funding deals, the model is evident in markets like India — where ZestMoney pulled in funds last month — and Southeast Asia, where Experian backed fintech startup C88.

Watkins-Ball said Jumo is aiming to do the same having already proven its model in Africa. He acknowledged that a number of startups are also tackling the problem and welcomed the increase competition and growth potential across the fintech and micro-financing space.

“We’ve offered services to millions of new customers who weren’t part of the banking ecosystems,” he explained. “Essentially we grow the addressable market for banks.”

Already, Jumo has begun offering services in Pakistan and it has plans to open up in more markets in Asia, although Watkins-Ball isn’t saying which ones or when right now. But, in addition to proving its model, he believes that Jumo has already shown it can adapt to new markets.

“The differences between countries like Ghana, Tanzania and Zambia are as great as those between India, China and Indonesia,” he told TechCrunch. “So we’ve had to learn to use our platform, which we built to be flexible, and localize in order to fit the customer.”

That’s backed up by Goldman Sachs executive director Jules Frebault, who said in a statement: “There’s an immense opportunity across Africa and beyond for Jumo to build on their successful track record developing digital marketplace infrastructure to offer mobile subscribers access to relevant financial products.”

In addition to Asian expansions, Jumo’s new capital will also go towards expanding its current selection of productions in Africa. In particular, Watkins-Ball says the company is working to partner with more banks and it plans to introduce “new generations” of saving products.

While it isn’t taking its foot off the pedal in Africa, he said Jumo will likely devote the majority of its resources to the Asia expansion plan. That’ll make Jumo a very notable addition to a fintech scene that is already showing significant potential across the Asian region.