A drone revolution is coming to sub-Saharan Africa.

Countries across the continent are experimenting with this 21st century technology as a way to leapfrog decades of neglect of 20th century infrastructure.

In Rwanda, the country’s government became one of the first adopters of performance-based regulations for all drones earlier this year. The country’s progressive UAV programs drew special attention from the White House and two U.S. Secretaries of Transportation.

Some experts believe Africa’s drone space could contribute to UAV development in the U.S. and elsewhere around the globe.

“The fact that [global drone] companies can operate in Africa and showcase amazing use cases…is a big benefit,” said Lisa Ellman, co-executive director of the Commercial Drone Alliance.

It’s clear that the UAV programs in Malawi and Rwanda are getting attention from international drone companies.

Opened in 2017, Malawi’s Drone Test Corridor has been accepting global applications. The program is managed by the country’s Civil Aviation Authority in partnership with UNICEF.

The primary purpose is to test UAV’s for humanitarian purposes, but the program “was designed to provide a controlled platform for… governments…and other partners…to explore how UAV’s can help deliver services,” according to Michael Scheibenreif, UNICEF’s drone lead in Malawi.

That decision to include the private sector opened the launch pads for commercial drones. Swedish firm GLOBEHE has tested using the corridor and reps from Chinese e-commerce company JD have toured the site. Other companies to test in Malawi’s corridor include Belgian UAV air traffic systems company Unifly and U.S. delivery drone manufacturer Vayu, according to Scheibenreif.

Though the government of Rwanda is most visible for its Zipline partnership, it shaping a national testing program for multiple drone actors.

“We don’t want to limit ourselves with just one operator,” said Claudette Irere, Director General of the Ministry of Information Technology and Communications (MiTEC).

“When we started with Zipline it was more of a pilot to see if this could work,” she said. “As we’ve gotten more interest and have grown the program…this gives us an opportunity to open up to other drone operators, and give space to our local UAV operators.”

Irere said Rwanda has been approached by 16 drone operators, “some of them big names”—but could not reveal them due to temporary NDAs. She also highlighted Charis UAS, a Rwandan drone company, that’s used the country’s test program, and is now operating commercially in and outside of Rwanda.

Africa’s commercial drone history is largely compressed to a handful of projects and countries within the last 5-7 years. Several governments have jumped out ahead on UAV policy.

In 2016, South Africa passed drone legislation regulating the sector under the country’s Civil Aviation Authority. The guidelines set training requirements for commercial drone pilots to receive Remote Pilot Licenses (RPLs) for Remotely Piloted Aircraft Systems. At the end of 2017 South Africa had registered 686 RPLs and 663 drone aircraft systems, according to a recent State of Drone Report.

Over the last year and a half Kenya, Ghana, and Tanzania have issued or updated drone regulatory guidelines and announced future UAV initiatives. 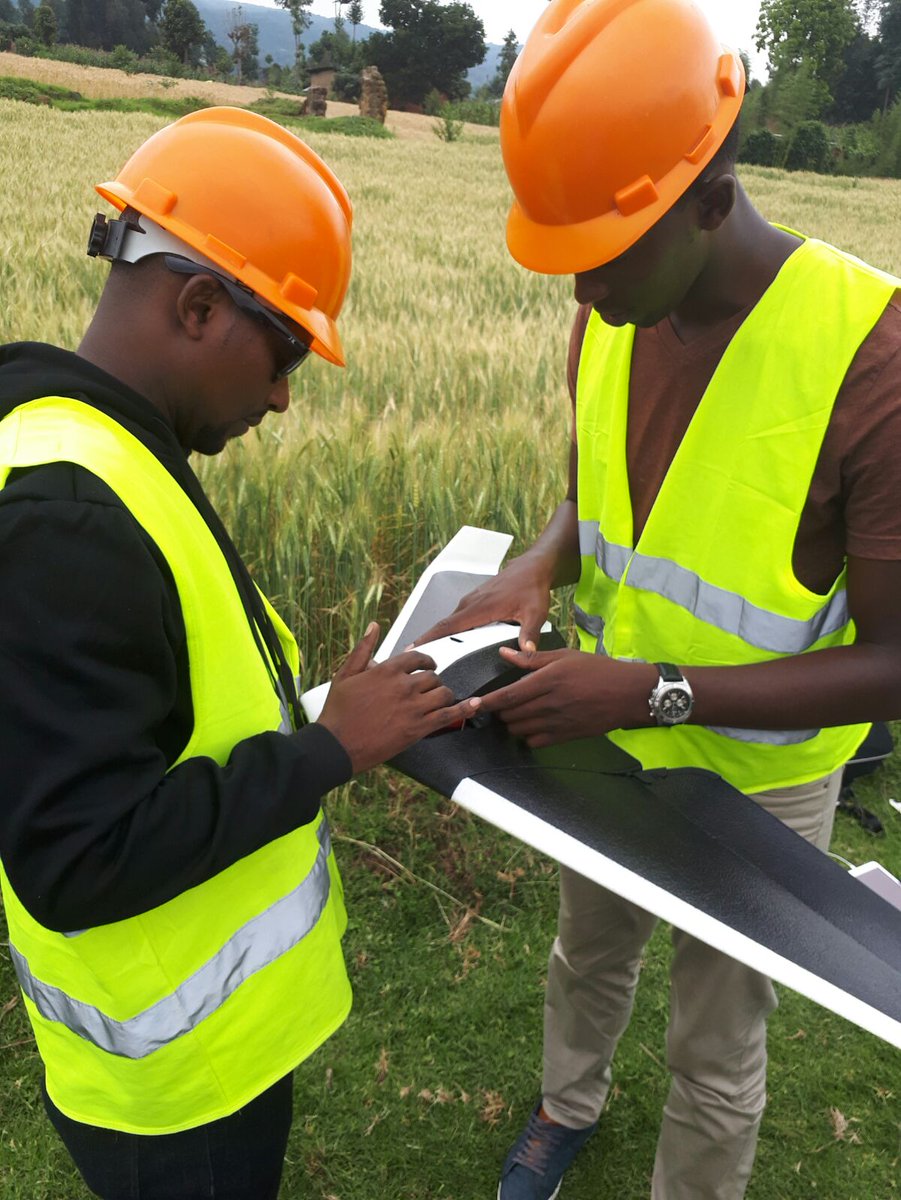 In 2018, Rwanda extended its leadership role on drone policy when it adopted performance-based regulations for all drones—claiming to be the first country in the world to do so.

So what does this mean?

“In performance-based regulation the government states this is our safety threshold and you companies tell us the combination of technologies and operational mitigations you’re going to use to meet it,” said Timothy Reuter, Civil Drones Project Head at the World Economic Forum.

“Rather than the government saying ‘you have to use this kind of technology to stop your drone,’ they would say, ‘your drone needs to be able to stop in so many seconds,’” she said.

This gives the drone operators flexibility to build drones around performance targets, vs. “prescriptively requiring a certain type of technology,” according to Ellman.

Rwanda is still working out the implementation of its performance-based regulations, according to MiTEC’s Claudette Irere. They’ve entered a partnership with the World Economic Forum to further build out best practices. Rwanda will also soon release an online portal for global drone operators to apply to test there.

As for Rwanda being first to release performance-based regulations, that’s disputable. “Many States around the world have been developing and implementing performance-based regulations for unmanned aircraft,” said Leslie Cary, Program Manager for the International Civil Aviation Authority’s Remotely Piloted Aircraft System. “ICAO has not monitored all of these States to determine which was first,” she added.

Other governments have done bits and pieces of Rwanda’s drone policy, according to Timothy Reuter, the head of the civil drones project at the World Economic Forum. “But as currently written in Rwanda, it’s the broadest implementation of performance based regulations in the world.”

As the UAV programs across Africa mature, there are a handful of strong examples and several projects to watch.

With Zipline as the most robust and visible drone use case in Sub-Saharan Africa.

While the startup’s primary focus is delivery of critical medical supplies, execs repeatedly underscore that Zipline is a for-profit venture backed by $41 million in VC.

The San Francisco-based robotics company — that also manufactures its own UAVs — was one of the earliest drone partners of the government of Rwanda. 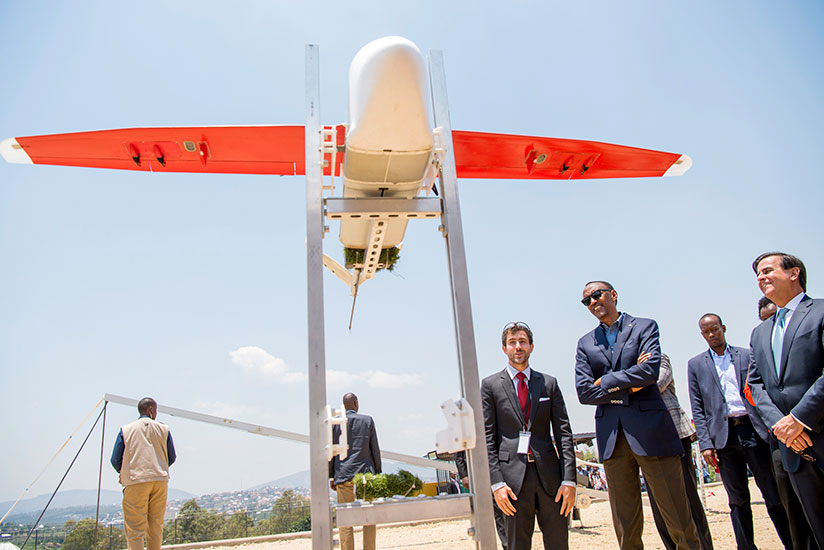 The alliance also brought UPS and the UPS Foundation into the mix, who supports Zipline with financial and logistical support.

“We’ve since completed over 6000 deliveries and logged 500,000 flight kilometers,” Zipline co-founder Keenan Wyrobek told TechCrunch. “We’re planning to go live in Tanzania soon and talking to some other African countries.”

In May Zipline was accepted into the U.S. Department of Transportation’s Unmanned Aircraft Systems Integration Pilot Program (UAS IPP). Out of 149 applicants, the Africa focused startup was one of 10 selected to participate in a drone pilot in the U.S.– to operate beyond visual line of sight medical delivery services in North Carolina.

In a non-delivery commercial use case, South Africa’s Rocketmine has built out a UAV survey business in 5 countries. The company looks to book $2 million in revenue in 2018 for its “aerial data solutions” services in mining, agriculture, forestry, and civil engineering. 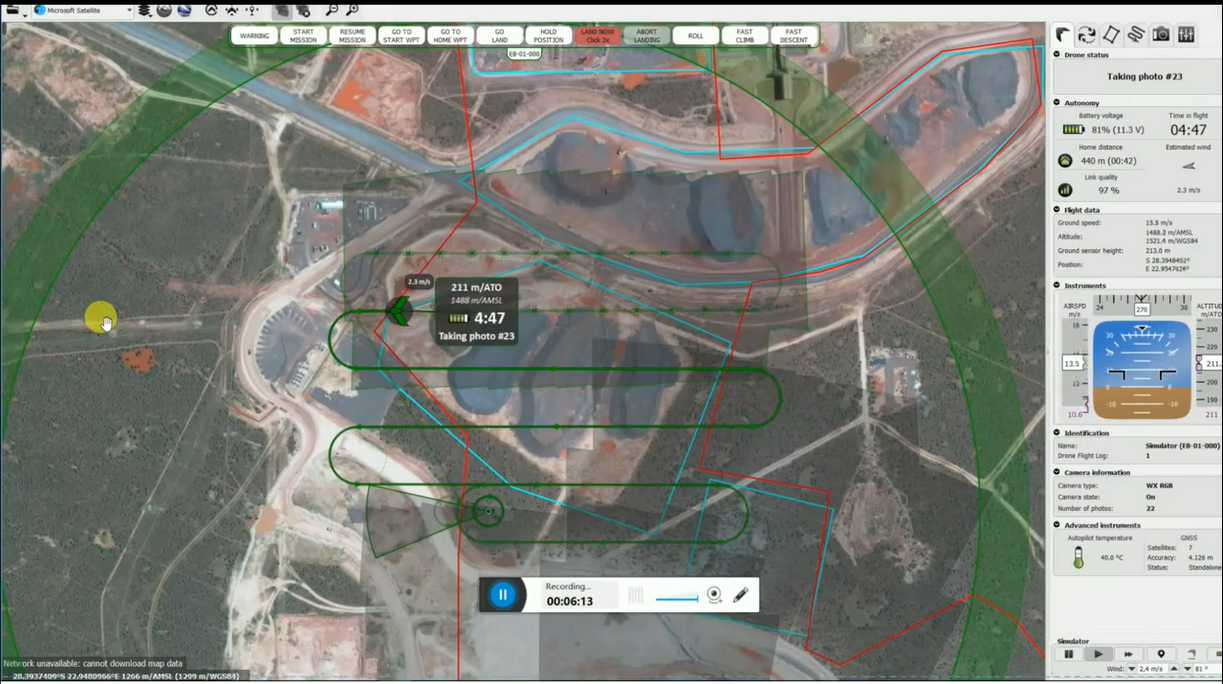 “We have over 50 aircraft now, compared to 15 a couple years ago,” Rocketmine CEO Christopher Clark told TechCrunch. “We operate in South Africa, Namibia, Ghana, Ivory Coast, and moved into Mexico.”

Rocketmine doesn’t plan to enter delivery services, but is looking to expand into the surveillance and security market. “After the survey market that’s probably the biggest request we get from our customers,” said Clark.

More African use cases are likely to come from the Lake Victoria Challenge — a mission specific drone operator challenge set in Tanzania’s Mwanza testing corridor. WeRobotics has also opened FlyingLabs in Kenya, Tanzania, and Benin. And the government of Zambia is reportedly working with Sony’s Aerosense on a drone delivery pilot program.

With Europe, Asia, and the U.S. rapidly developing drone regulations and testing (or already operating) delivery programs (see JD.com in China), Africa may not take the sole position as the leader in global UAV development — but these pilot projects in the particularly challenging environments these geographies (and economies) represent will shape the development of the drone industry.

The continent’s test programs — and Rwanda’s performance-based drone regulations in particular — could advance beyond visual line of sight UAV technology at a quicker pace. This could set the stage for faster development of automated drone fleets for remote internet access, commercial and medical delivery, and even give Africa a lead in testing flying autonomous taxis.

“With drones, Africa is willing to take more bold steps more quickly because the benefits are there and the countries have been willing to move in a more agile manner around regulation,” said the WEF’s Reuter.

“There’s an opportunity for Africa to maintain its leadership in this space,” he said. “But the countries need to be willing to take calculated risk to enable technology companies to deploy their solutions there.”

There’s a case to be made this is already happening with Zipline. Though founded in California, the startup honed its UAVs and delivery model in Rwanda.

“We’re absolutely leveraging our experience built in Africa as we now test through the UAS IPP program to deliver in the U.S.,” said Zipline co-founder Keenan Wyrobek.