In venture capital, a variant on the Glengarry Glen Ross mandate is most fund managers’ modus operandi: Always. Be. Raising.

And it seems like VCs have picked up on that. In the last few months, even casual readers of the tech press would notice many, many stories about VCs raising big new funds. So are venture investors spinning up new funds as often as they did in the past?

VCs are certainly raising tons of money, and Crunchbase News reported earlier this week that these huge funds are bending the shape of the VC fundraising curve upward. But is that the full story? Even though 2018 has been a banner year so far for venture fund origination on the highest end of the assets-under-management spectrum, what about the market as a whole?

Aggregated venture capital and micro VC fundraising data from Crunchbase suggests that U.S.-based firms are spinning up fewer new funds than they did just a couple of years ago. In other words, the peak might be in.

Let’s take a look at the numbers, which we’ve segmented by U.S. Census region. 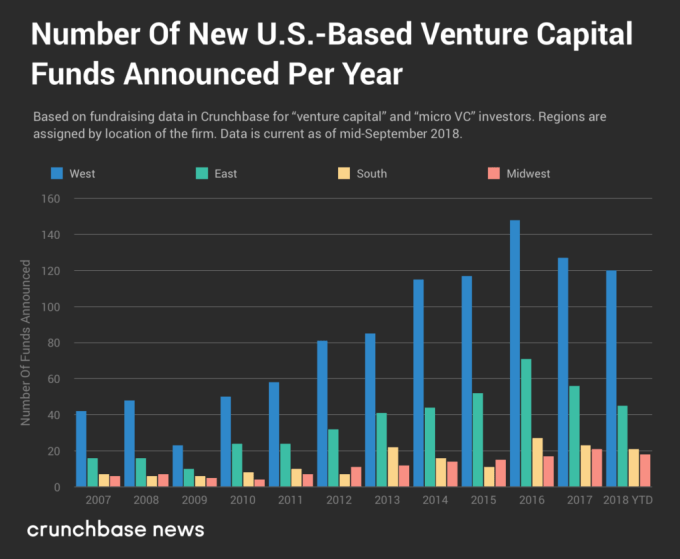 There are a few trends to glean from the chart above, and it comes down to pace and scale.

And at least when it comes to investors from Western and Eastern states, the difference is one of scale rather than direction. As the count of funds raised rises in the East, so it goes in the West.

Our data suggest that, in aggregate, new fund creation hit a local maximum in 2016. With more than 260 new funds announced that year, it’s a record that stretches back at least to the time of the first dot-com collapse — if it’s not an all-time record on its own.

Not all bad news

To break the dollar volume record, VCs need to raise another $4.6 billion in new funds by the end of the year. Considering that approximately $40 billion has already been raised, this seems possible. But it’s important to remember that eighty percent of new funds are smaller than $250 million.

One of the things some might ignore about all the money currently going into venture capital funds (and, by proxy, into privately held tech startups) is that it is going to have to come back to limited partners with a hefty return.

The $45 billion U.S. VCs are on pace to raise in 2018 would have to net more than $135 billion in returns by 2028, presuming a 10-year term for the fund and a 3x realized multiple (the minimum threshold for venture scale returns).

That sounds unlikely, given that we are in the senescence of a bull cycle. But so long as public tech companies soar, SaaS booms and investors are so hungry for tech shares that middling Chinese firms can go public domestically twice in a week, there’s little reason to expect too much of a pullback in the short term.

Until the real correction comes, at which point we’ll see some far shorter bars added to our graph.