CBS All Access, the network’s over-the-top streaming service for cord cutters, will now let subscribers save shows for offline viewing. The feature, “Download & Play,” is only available to those on CBS’s Commercial Free plan, not those on the cheaper, ad-supported tier. It also supports a range of programming, including CBS All Access Originals, reality shows, primetime dramas, news magazines, and other classics from the CBS library.

At launch, the lineup of supported shows includes originals like Star Trek: Discovery, The Good Fight, One Dollar, Strange Angel, and No Activity, plus Big Brother, Survivor, Blue Bloods, Bull, Hawaii Five-0, MacGyver, NCIS: New Orleans, 60 Minutes, and 48 Hours. All classics will also be available for offline access, meaning you can download old Star Trek episodes, Cheers, Twin Peaks and many others.

Content from local stations, local news and sports will not be available for offline viewing.

There are a few caveats in using the download feature. The content is only available offline for 30 days after the download, or 48 hours from the time of playback. If it expires, you’ll then have to download it again.

Downloads are also only available in the U.S. for the time being, CBS says.

However, users are able to download up to 25 videos at once, and can watch videos on up to 5 different devices.

The feature is going live on both iOS and Android, on version 6.0 of the CBS All Access app and higher. 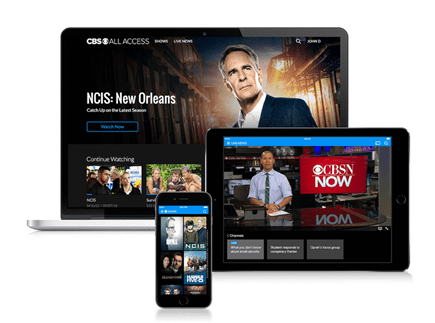 The company considers this a “premium” option, which is why it’s only making it available to Commercial Free subscribers, it says.

Hulu, for example, only recently announced it would allow offline viewing, including the download of commercials for those on its ad-supported plan. It then became the first in the industry to support downloads with ads, it said during its Upfront presentation in May.

CBS may choose to invest in similar technology in the future, but for now, it’s easier to just roll out offline support to those who pay more to skip the commercials.

Other major streamers have allowed for downloads for years, it’s worth noting. Netflix added support on mobile back in 2016, following Amazon Prime Video’s launch of offline support the year prior.

The addition of offline support for CBS All Access means you’ll be able to watch shows when you’re out of reach of a network or good signal – like when traveling, commuting, or on a plane, for example. (Maybe I’ll finally finish this new, not so great Star Trek). Or you can use the option to save money on your data plan.

But the feature will matter even more as CBS expands its originals catalog, which will include new shows like a reboot of The Twilight Zone from Get Out director, Jordan Peele; Scream writer and producer Kevin Williamson’s twisted fairytale series Tell Me a Story; and a new Star Trek series led by Patrick Stewart, among others.