PlayVS, the startup bringing an e-sports infrastructure to the high school level, has today announced that it will partner with Riot’s League of Legends for its early-access season.

High school students across five states, including Connecticut, Georgia, Kentucky, Massachusetts, and Rhode Island, will be able to sign up to play for their school in Season Zero, which begins in October 2018.

Around 200 colleges and universities across the U.S. and Canada are offering esports scholarships, but without any infrastructure around high school esports, those recruiters are left at the mercy of the publishers and a grueling tournament schedule.

Meanwhile, young gamers who want to go pro are forced to gain a following via Twitch, or hit up all those tournaments and find a way to shine.

PlayVS offers access to recruiters while giving high school students the chance to play competitive esports at the high school level. The startup, backed by Science with $15.5 million in funding, has partnered with the NFHS (essentially the NCAA of high school) to offer turnkey competition through its dashboard. 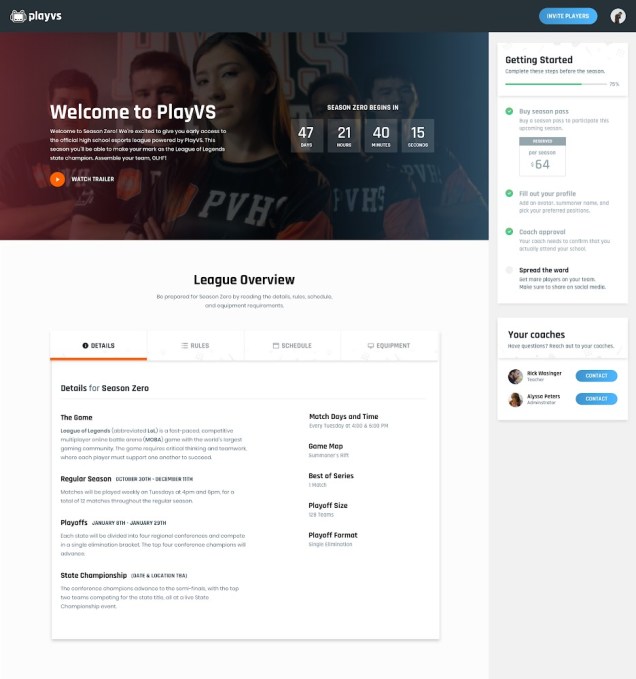 PlayVS partners with publishers, and lets players sign up, receive team and league schedules, check standings and stats, and actually play the game all within the PlayVS online portal.

PlayVS has a no-cut policy, letting high schools submit as many unique teams as they like. Given that the company makes money from players themselves ($64/season/player), it makes sense that the company would take a ‘the more the merrier’ approach.

The company then divides up those teams into conferences, and the teams play to be conference champions, advance to semi-finals, and eventually head to the state championship. All the games will be played from the students’ own school through the online portal, except for the State Championship tournament which will have a live spectator audience.

This season, which includes five states, gives PlayVS a chance to roll out the platform to a smaller pool of players and work out any issues ahead of the inaugural season, which starts February 2019.