Indonesia’s Moka, a startup that helps SMEs and retailers manage payment and other business operations, has pulled in a $24 million Series B round for growth.

The investment is led by Sequoia India and Southeast Asia — which recently announced a new $695 million fund — with participation from new backers SoftBank Ventures Korea, EDBI — the corporate investment arm of Singapore’s Economic Development Board — and EV Growth, the later stage fund from Moka seed investor East Ventures. Existing investors Mandiri Capital, Convergence and Fenox also put into the round.

The deal takes Moka to $27.9 million raised to date, according to data from Crunchbase.

Moka was started four years ago primarily as a point-of-sale (POS) terminal with some basic business functionality. Today, it claims to work with 12,500 retailers in Indonesia and its services include sales reports, inventory management, table management, loyalty programs, and more. Its primary areas of focus are retailers in the F&B, apparel and services industries. It charges upwards of IDR 249,000 ($17) per month for its basic service and claims to be close to $1 billion in annual transaction volume from its retail partners.

That’s the company’s core offering, a mobile app that turns any Android or iOS device into a point-of-sale terminal, but CEO and co-founder Haryanto Tanjo — who started the firm with CTO Grady Laksmono — said it harbors larger goals.

“Our vision is to be a platform, we want to be an ecosystem,” he told TechCrunch in an interview.

That’s where much of this new capital will be invested.

Tanjo said the company is opening its platform up to third-party providers, who can use it to reach merchants with services such as accounting, payroll, HR and more. The focus is initially on local services that cater to SMEs in Indonesia, but as Moka targets larger enterprises as clients, he said that it will integrate larger, global solutions, too. 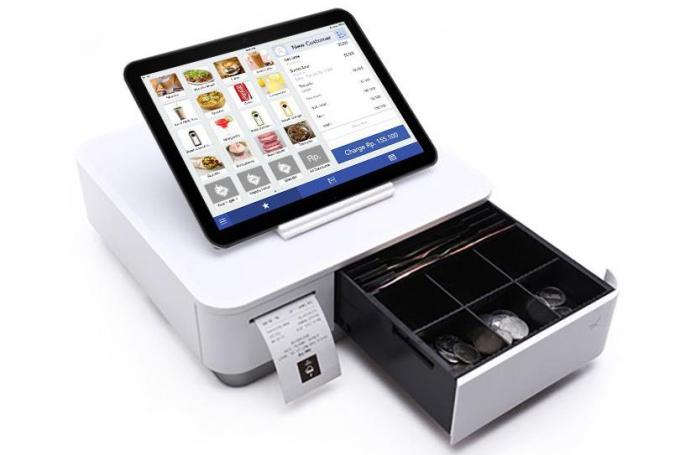 Moka offers services beyond point-of-sale, but the core offering is turning any smart device into a cash machine

Moka itself is expanding its capabilities on the payment side.

Indonesia, the world’s fourth largest country based on population and Southeast Asia’s largest economy, is in the midst of a fintech revolution with numerous companies pioneering mobile-based wallet services aimed at ending the country’s fixation on cash-based transactions. That’s mean that there are a plethora of options available today. Tanjo said Moka is working to support them all in order to help its merchants grow their businesses and consumers to have easier lives.

There are so many wallets here in Indonesia,” he said. “There are more than 10 right now and maybe in the next few months there’ll be 15-20, we want to be the platform that works with all of them.”

Already it works with the likes of OVO, T-Cash and Akulaku, and e-wallets including DANA and Kredivo. The startup is also working in another area of fintech: loans.

As an extension of its platform, it has tied up with SME loan companies who can reach out to Moka businesses using its platform. With the merchant’s consent, Moka can provide business data — including revenue, profit, etc — to help provide data to assess a loan application. That’s important because the process is particularly challenging in Southeast Asia, where few organized credit checking facilities exist — it makes sense that Moka — which has built its business around encouraging business growth and management — uses the information it has access to help its partners.

Tanjo said the company takes an undisclosed cut of the loan in cases where it has successfully connected the two parties. He said that he doesn’t expect that to initially become a major revenue stream, but over time he anticipates it will help its customer base grow and become a more important source of income for the startup.

Sequoia India has some experience in POS startups having backed Pine Labs in India, which recently landed a big $125 million round from PayPal and Singapore sovereign fund Temasek. Still, there are plenty of local players across various markets in Southeast Asia, including StoreHub, which is backed by Temasek subsidiary Vertex Ventures, and Malaysia’s SoftSpace.

While those two competitors have established a presence in multiple markets in Southeast Asia, Tanjo — the Moka CEO — said there are no plans to venture overseas for at least the next 12 months.

“We’re still scratching the service,” he said. “So [it] doesn’t make sense to expand too soon.”