Apple kicked off its hardware event today with a charming little video that did double promo duty, both introducing the event in a lighthearted way and giving a quick curated tour of the company’s new “spaceship” headquarters. We don’t always post Apple advertisements here at TechCrunch, but when we do, it’s because they actually show off something new. Well, kind of new, anyway. It’s nice to see it all in motion.

A low aerial shot brings us into the scene, the top floor of the spaceship’s exterior, and as the opening strains of the “Mission: Impossible” theme start up, we see our protagonist (Alison, we find out later) blast out of a conference room.

A couple of things to note here: the top floor (4, by the way) is filled with outward-facing rooms, surely of various sizes and functions, but the outermost ring, right next to the windows, is where you walk. With all the people moving around those glass-lined tunnels, perhaps a better name for this HQ would be the Ant Farm.

However, there do appear to be some shared spaces with chairs and other accommodations here and there. It just doesn’t appear that lots of the outdoor spots will be cherry offices with nice views, with peons stuck in some inner ring. That’s good. But there will have to be a full-time staff, plus robots, to keep the glass clean. That’s bad. It’s poetic in a way, though: everyone is always having to de-smudge their phones, why shouldn’t Apple have to de-smudge its headquarters?

Next (via a rather dizzying pan) is what we have to assume is a spoke on the wheel, a large atrium that looks to extend from center to exterior, and is filled with calming white and neutral-colored furniture. It looks like the inside of Jony Ives’s brain. There are probably eight of these, with one or two being extra resplendent for visitors, perhaps with stores extending off the sides, portrait galleries of Apple execs and so on.

This shot is very “North by Northwest,” by the way. 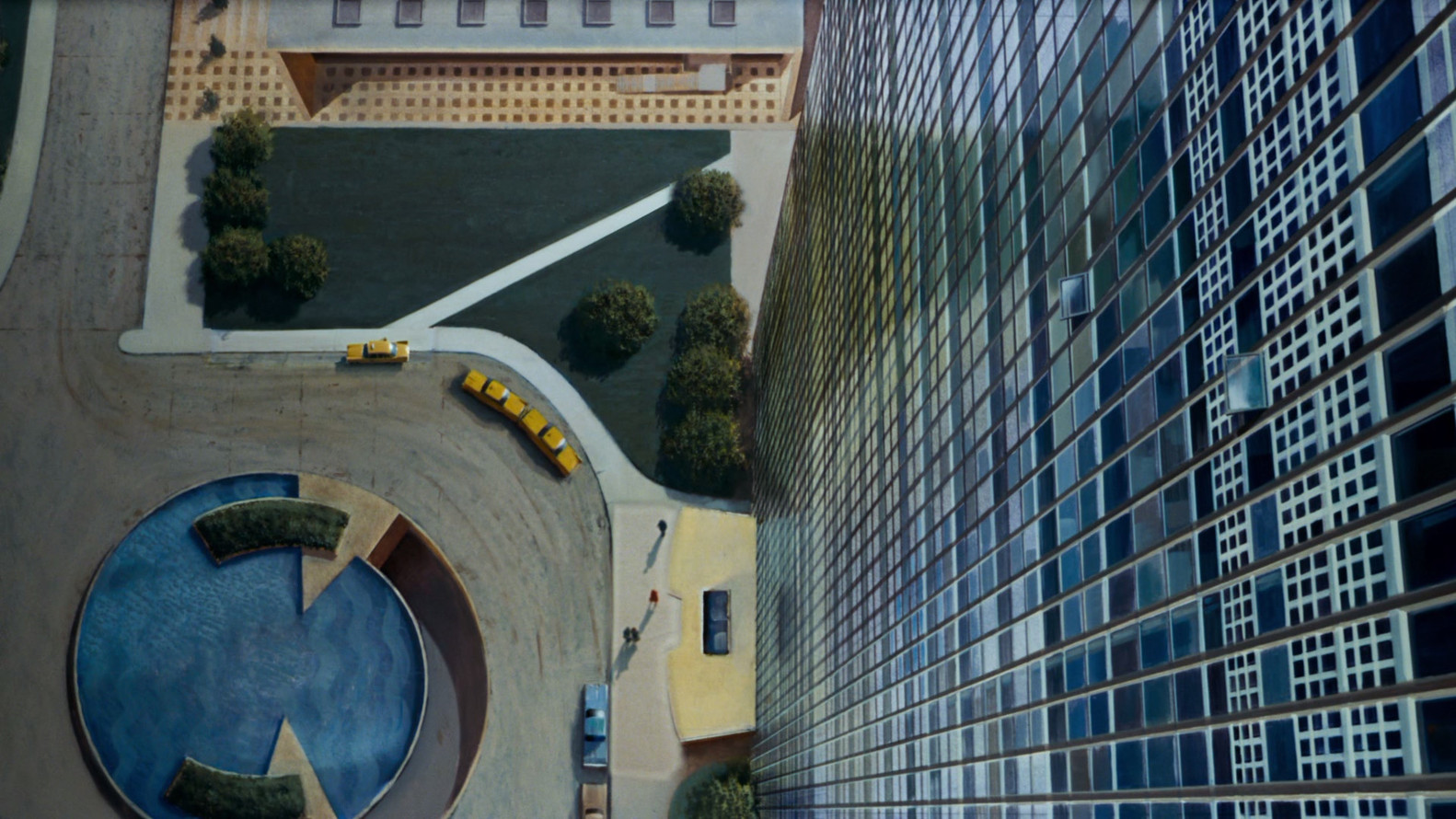 It’s a matte, but still. Saul Bass is the master, by the way.

The spoke opens up on the inner side onto the big courtyard, as we all know, which is elaborately landscaped and criss-crossed with paths. At the center is a large pond, though interestingly there seem to be rather few paths leading to it, since our heroine takes the direct route through the sage and other brush.

I actually expected the pond to be a bit more picturesque, but there’s only so much you can do with that climate. It seems to be only about a foot deep, lined with large rocks. I was hoping they might let it go wild with lily pads, wild birds and so on. I’ll be interested to see how they keep it free of algae so people like the protagonist can rush through it. Luckily her AirPods didn’t fall out. (If she had a headphone cable it wouldn’t be a problem. Just saying.)

Obviously Apple is making a bit of fun of itself here regarding the inconvenient nature of a ring-shaped HQ with a body of water in the middle. Shouldn’t there be a pedestrian underpass or something?

Across the pond our intrepid briefcase carrier perhaps unadvisedly runs right through a bunch of people blowing grass all over each other on what appears to be a large continuous greenbelt or fairway between the lake and the ring. Doesn’t Apple know you’re supposed to leave the cuttings on the grass? What do those guys think they’re doing anyway? There are like 20 in one little area.

Into the far side of the ring, where there’s a large cafeteria filled with Apple’s favorite cedar furniture and stretching through all 4 stories. Some of it looks CG. If I’m honest a lot of this looks CG. It has probably been extensively touched up.

On the outside of the cafeteria spoke is a huge set of sliding doors, which employees are likely not encouraged to do a tactical roll through when they’re closing. That’ll be really nice in the mild summers of Cupertino to get the breeze in there. That space might be hard to heat if there’s a cold snap, though.

A nice touch has the protagonist hitting all her rings while taking a silver Apple bike from HQ to Steve Jobs Theater. Brave of Apple to show the bike failing, or grabbing her cuff, or whatever happens at the end. Usually nothing of theirs fails in their promos.

Of course the denouement is the delivery of the briefcase to Tim, and the reveal — with a shot that will probably be used and reused for dank memes in the future — that it was The Clicker.

Clearly Apple wanted to show off its new HQ in a careful way, and certainly they’ve whetted the appetites of many Apple devotees who will want to see this haven in person. Unfortunately, however, our heroine has tasted the bitterness of being carelessly exploited by the executives at her company, perhaps now feeling for the first time what Apple’s manufacturing partners exact from their workers. With luck she will learn from this and enact change from within. Now that’s an impossible mission.