What makes the A12 Bionic stand out is that it’s built using a 7nm process. While it’s hard to compare these numbers given that every chip manufacturer seems to have its own way of measuring them, 7nm is very much the state of the art. Indeed, Apple claims this is the industry’s first 7nm chip. It features a total of 6.96 billion transistors.

“What the team has done is truly, truly a breakthrough,” Phil Schiller, Apple’s SVP of Worldwide Marketing, said in today’s keynote. “The A12 bionic is the industry’s first 7nm chip.”

The A12 Bionic, which was designed by Apple, features a 6-core CPU and a 4-Core GPU, as well as Apple’s Neural Engine for running machine learning workloads. What’s interesting here is that the chip has two high-performance cores and four efficiency cores. The high-performance cores are up to 15 percent faster and use 40 percent less power than before, while the efficiency cores use up to 50 percent less power.

The GPU, too, got a speed boost and is now almost 50 percent faster. Rejoice, mobile gamers. 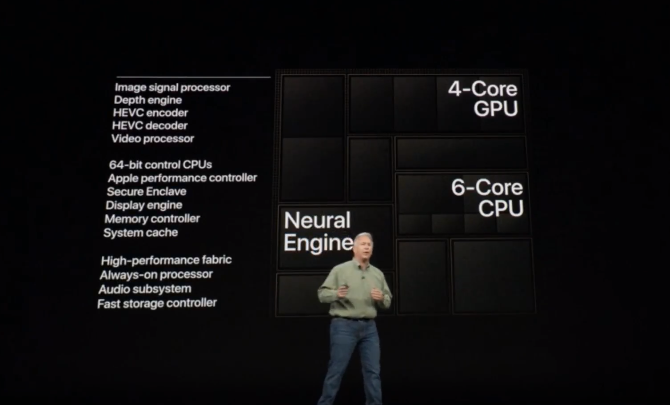 The Neural Engine is now an eight-core system that has gotten a speed boost as well as new smarts. Schiller noted that the chip can now figure out what the machine learning workload looks like and then decide whether to run it on the GPU, CPU or the Neural Engine.

In total, the A12 Bionic’s Neural Engine can process 5 trillion operations per seconds. That’s up from 600 billion for the A11. I would take those numbers with a grain of salt, though, since Apple didn’t quite detail what operations we are talking about here. Either way, though, it’s a pretty fast chip.