The music business is littered with stories about songwriters or studio contributors and session musicians who never get the credit — or money — they’re often due for their work on hit songs.

And for every storied session musician in “The Wrecking Crew” there are perhaps hundreds of other contributors who aren’t getting their just desserts.

That’s where Jammber comes in. The five-year-old company co-founded by serial entrepreneur Marcus Cobb has developed a suite of tools to manage everything from songwriting credits and rights management to ticketing and touring all from a group of apps on a mobile phone. And has just raised $2.4 million in funding to take those tools to a broader market.

Jammber “Muse” gives collaborators a single platform to exchange lyrics and song ideas, while the company’s “Splits” app tracks ownership and credits of any eventual product from a collaboration. The company’s nStudio tracks songwriting credits to assist with chart and Grammy submission — through a partnership with Nielsen Music — and its “PinPoint” helps organize touring. The recording applications even have a presence feature so session musicians, songwriters and artists can actually be tagged in the studio while they’re working.

“I think we need to get attribution and monetization closer to the creators,” Cobb has said. “Why aren’t we doing that? The industry is growing and thriving. Are we making sure that performers and creators of all different tiers are being equally compensated?”

The answer, sadly, for many in the music industry is no. In fact, while Cobb had originally set out to make a networking tool for creatives with Jammber he wound up shifting the service to the management toolkit after visiting the offices of a music label.

“I saw stacks and stacks of payroll checks that were returned to sender,” Cobb, told Crain’s Chicago Business. “These checks were taking three months to two years to print, and they were wrong addresses, or there were stage names instead of legal names.”

That experience convinced Cobb of the demand, but it was Nashville that gave the serial entrepreneur the crucible within which to develop the full suite of tools that now make up Jammber’s soup-to-nuts platform.

Cobb likes to say that Jammber was conceived in Chicago (where the company spun up from the city’s massively influential 1871 entrepreneurship center) and born in Nashville — the home of the multi-billion-dollar American country music industry. All of the tools in Jammber, Cobb says, were created with input from a local musician, producer, artist and repertoire person or a label executive.

In 2015, the company came down to Nashville as part of the first batch of companies in Project Music, a joint venture between the Country Music Association and the Nashville Entrepreneur Center meant to encourage the development of technology for the music industry.

For the 41-year-old Cobb, programming and entrepreneurship has literally been a life saver. Growing up in Texas and Nevada with an abusive, drug-addicted stepfather took a toll on Cobb and programming became an outlet — thanks to a particularly well-equipped computer lab at his high school. “I had moved 24 times,” Cobb said in an interview. “My stepfather was a full-blown crack addict. He would disappear with money; we got evicted a lot.”

But the experience with computers led to an early job out of high school, which launched Cobb’s tech career. He sold his first company, Eido Software in 2007 a year after launching it and has used that money to pursue other endeavors.

And while Cobb is a gifted programmer, that’s not his only interest. His next big foray into business was as the owner and lead designer of Marc Wayne Intimates, a boutique lingerie company that also provided the business-savvy Cobb with his first window into the music business — outfitting dancers in music videos for artists like Pitbull.

Cobb has invested $300,000 of his own money into Jammber and raised roughly $400,000 in early seed funding. The $2.3 million that the company raised in its most recent round came from a who’s who of music executives, including former Sony Nashville chief executive Joe Galante; Hootie and the Blowfish manager Clarence Spalding; and Kings of Leon manager Ken Levitan.

These investors know the tension at the heart of the music business better than anyone, Cobb says — which is that the creative act of making music can often be at odds with the mundanity of organizing and running an effective business to ensure that the music getting made is actually heard by an audience that then pays the musician for their work. 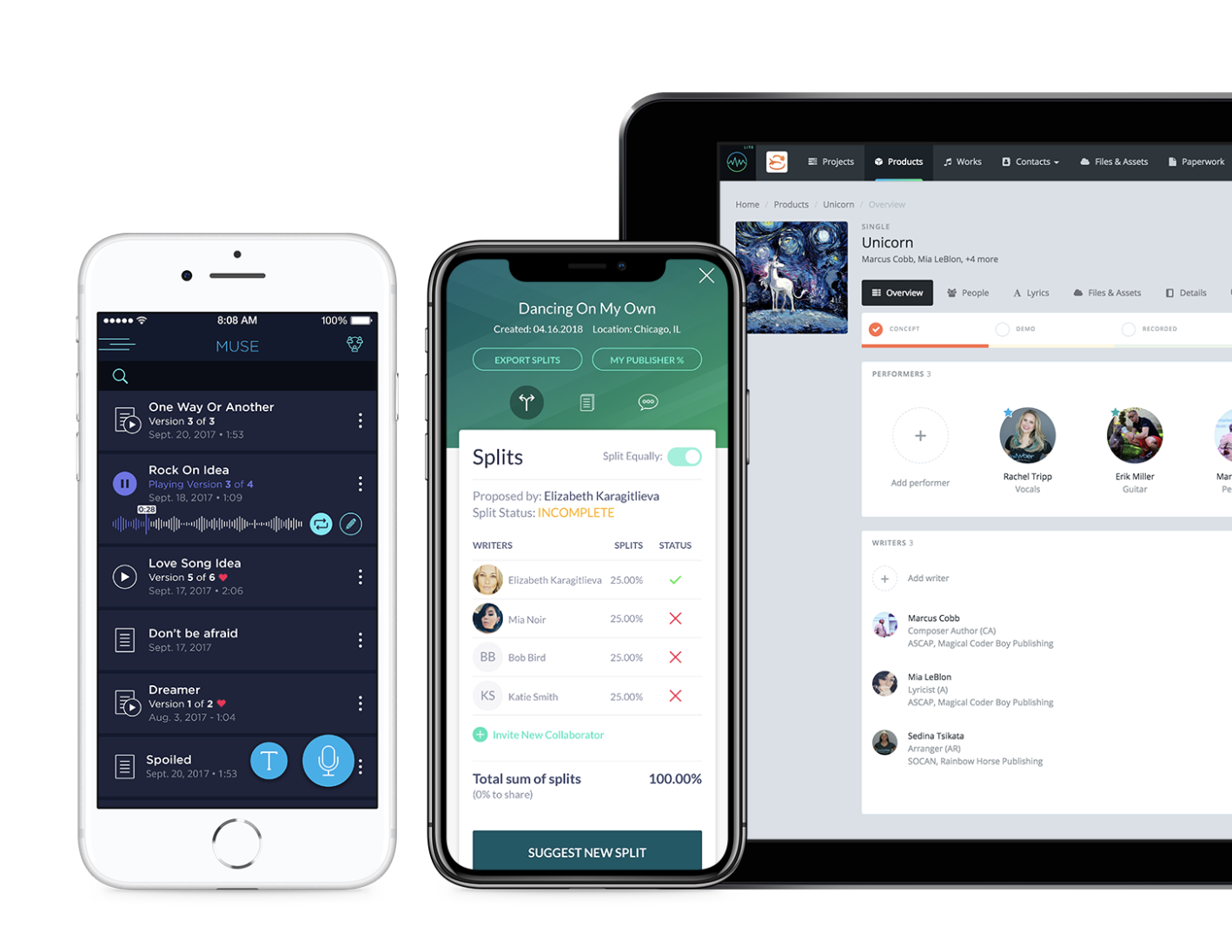 “The irony about making a living in a copyright industry like the music industry is you have to be very organized to make money in a timely manner or even get credit for your work,” said Cobb. “Over 40 percent of the money creators are owed is tied up by bad or wrong data because it’s very difficult to be organized while you create. These tools finally change that.”

Jammber’s services are currently in a closed, invite-only beta that will be capped at 10,000 users. There’s a basic set of services that will be available for free, with pricing for “unlimited” access to the toolkit starting at $10 per month. In addition to the applications, the company also has an online platform that integrates with the mobile suite. Pricing for that service starts at $25 per month.

“This is an ecosystem play for us. I’ve been in software for a long time and the realization for me is that it’s not just mobile-first or cloud-first anymore, it’s simplicity-first. Independent artists and record labels generated $5.2 billion in revenues last year and the sector continues to grow — all while largely using paper and spreadsheets for their back office tools,” said Cobb. “This is a massive, underserved market and we believe we’ve figured out how to provide the value they’ve been waiting for.”