This morning at TechCrunch SF 2018, Founders Fund partner Cyan Banister shared her inspirational journey from a homeless teen at the age of 15 to now a venture capitalist who’s invested in startups like Uber, Thumbtack, SpaceX, Postmates, EShares, Affirm and Niantic.

Banister spoke this morning at Disrupt about the handful of values she cites as key to making the transition from the streets to VC investing. These included incrementalism — meaning focusing on the next step, whether that’s getting the next meal or shower, for example — as well as individualism, mentorship and technology, and endless curiosity.

She credits being obsessed with making more money — capitalism — as being what eventually saved her life. She was always focused on getting to the next step — getting that next meal, getting a shower, getting a job, then learning new skills.

Banister began to see all this as a game, and each step was a form of “leveling up.” 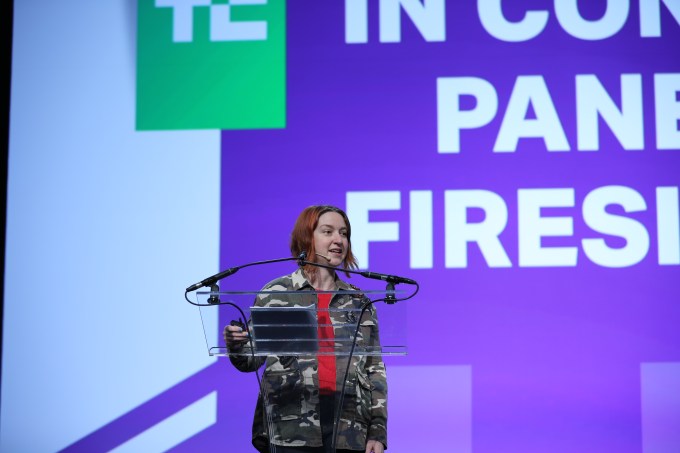 Getting insight and advice from tech mentors she encountered was another turning point in her life, Banister says.

Learning to use computers, get online and, eventually, write code gave her access to the internet, hacker culture and then, entry-level tech work.

“Suddenly, my brain was fully engaged for the first time in my life,” she says.

By taking initiative at work in unconventional ways, she was fortunate to not be fired for not following the rules, but rather encouraged to explore her creativity. She received a promotion that allowed her to learn about Linux, BSD, how the internet actually works and how to set up routers DNS servers email servers over the next two years.

And she did all this as a high school dropout who never went to college.

After moving to San Francisco and working at a startup, Banister earned a windfall after an exit to Cisco. This, she used to make investments in other up-and-coming tech companies.

“My first angel check went into SpaceX. I was terrified but it was exciting… I became addicted,” she says.

Her savvy investments got her an invite to join Founders Fund, as a partner.

“I have a chance to play in a new arena and stretch myself intellectually,” Banister says.

When asked how she did it, she responded, “I can only tell you that I was endlessly curious. I surrounded myself with people smarter and more capable than me. I played the game every day, I still do.”