Amazon promised to breathe new tech into the relationship with Whole Foods after putting a $13.7 billion ring on it one year ago. So how did that promise shake out?

At the time, Amazon said the goal was to make “high-quality, natural and organic food affordable for everyone.” Bananas, avocados and even tilapia was going to be cheaper than before. Prime members would receive increased benefits with discount rewards and Amazon drones would be delivering packages right to your door.

Okay, that last bit was not promised — though we’re not the first to speculate on that possibility in the future.

A bunch of other Amazon offerings involving delivery options were also mentioned, including the getting of Whole Food groceries through a then new Amazon Fresh grocery delivery program and Whole Foods private label products would be made available through Prime Now and Prime Pantry. Further, Amazon lockers would be showing up at select stores to make pick ups and returns easier for Amazon customers. And, of course, new jobs would be created to handle all the new infusion of technology.

Soon customers started to see Amazon Echo devices popping up in stores, urging people to install them in their home for easier grocery ordering through voice command. Echo dots lined the walls and could be found surrounded by produce. Amazon promised to deliver more devices to try in-store ahead of purchase as time went on.

Since the launch, “customers have already saved hundreds of millions of dollars,” according to Whole Foods co-founder and CEO John Mackey. “So whether it’s better prices on your weekly shop, saving time through delivery from Prime Now or taking advantage of incredible weekly deals for Prime members, the overall customer experience is richer and more seamless than it’s ever been,” he continued. 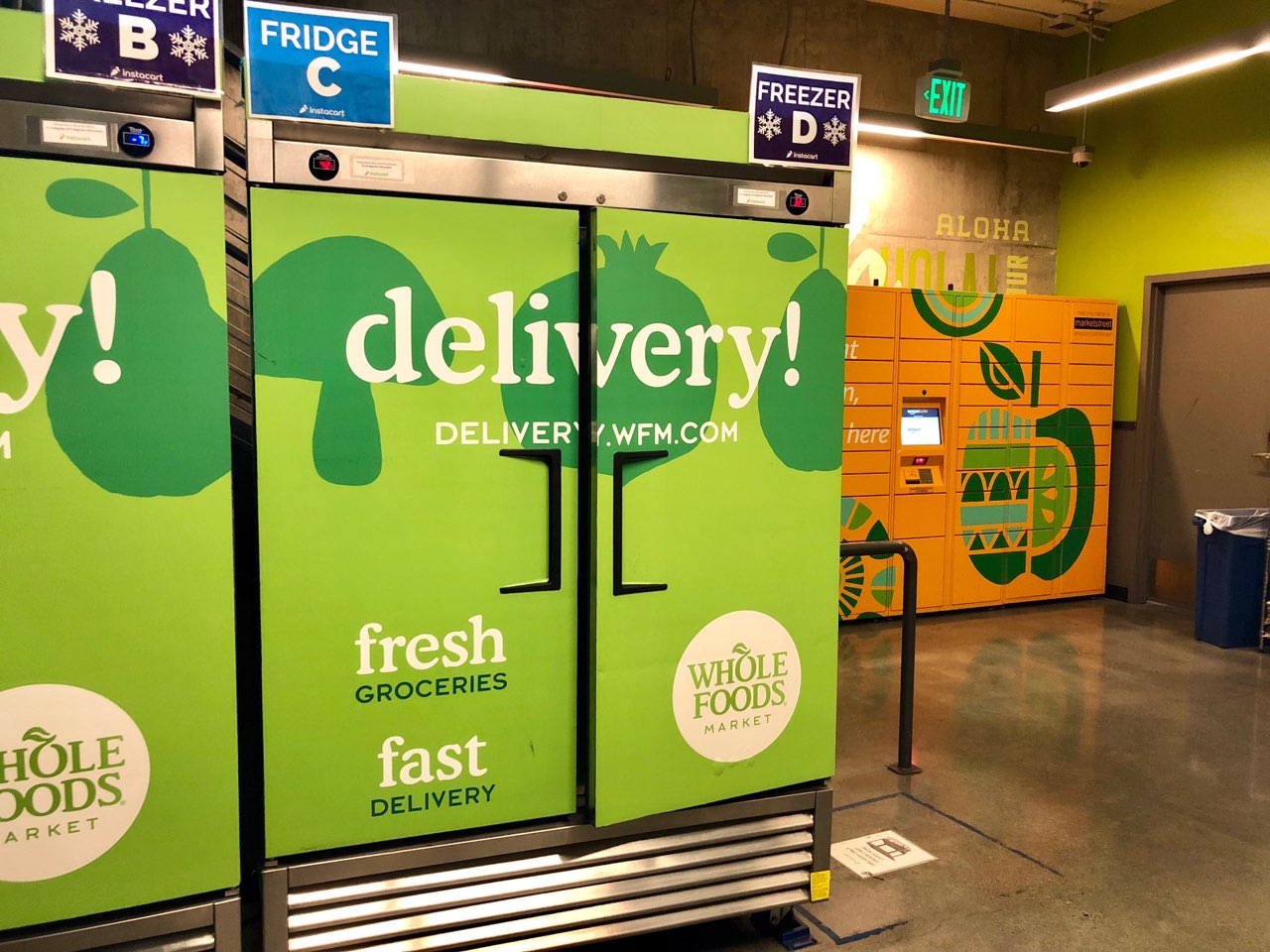 I’m not sure the average customer would see the experience as “richer and more seamless” but the changes are noticeable. Walking into my local Whole Foods, the Amazon branding is everywhere from the deep orange lockers off to the side, the large, green Amazon Fresh coolers greeting me at the entrance to the parking lot and rows of bags ready for pickup and delivery via Amazon workers.

A large “Prime Member Deal” sign hangs down from the ceiling, greeting me at the front of the store. Beyond, there’s the produce, once fresh and free of rot with all organic labeling. Now? It’s unclear. I used to argue the “whole paycheck” prices were worth it for the better quality produce. Lately, I’ve had to throw a bunch of stuff out because it just doesn’t last as long or look as good. Not everything is organic.

Other shoppers have noticed the same dip in quality across the U.S., along with missing products or a lot of out of stock items they’d been buying for years at their grocery store.

It’s been called the “conventionalization” of Whole Foods by Wall Street investment bank Barclays, which also noted there had been some comments from Mackey about cultural “clashes” during his appearance at the American Production and Inventory Control society’s annual conference. 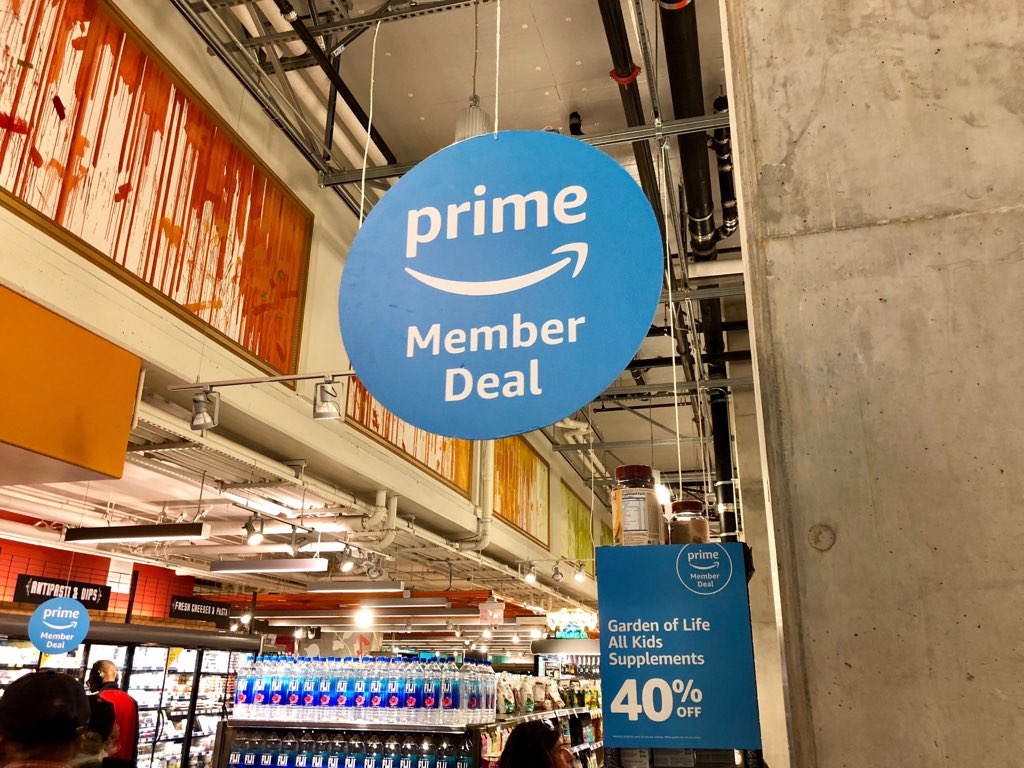 On the flip, Amazon has managed to add some nifty integrations for Prime members including club member style sales prices and five percent cash back for those purchasing groceries with their Prime Visa card. You want to do one better, just download the Amazon app to your smartphone, use the code given and then purchase with Apple pay using your Amazon Prime credit card for maximum benefits. Of course, that’s only for those all in with the system.

Adding to that, there’s the super fast two-hour delivery option (in 20 cities for now, with more to come this year, according to Amazon) and grocery pickup so you don’t even have to wander through the store to get everything you need (although, I am one of those who likes picking out my own produce and wandering through the store sometimes),

I’ve also enjoyed using the integrated partnership to order Whole Foods items straight from my Amazon Fresh account (a lifesaver in those early days of postpartum when it was impossible to get out of the house). Before the integration I could use Instacart but had to order from each store separately in different orders. With Amazon, I can order from various stores, including Whole Foods through my Amazon Fresh account all in one order and then choose a time for delivery. 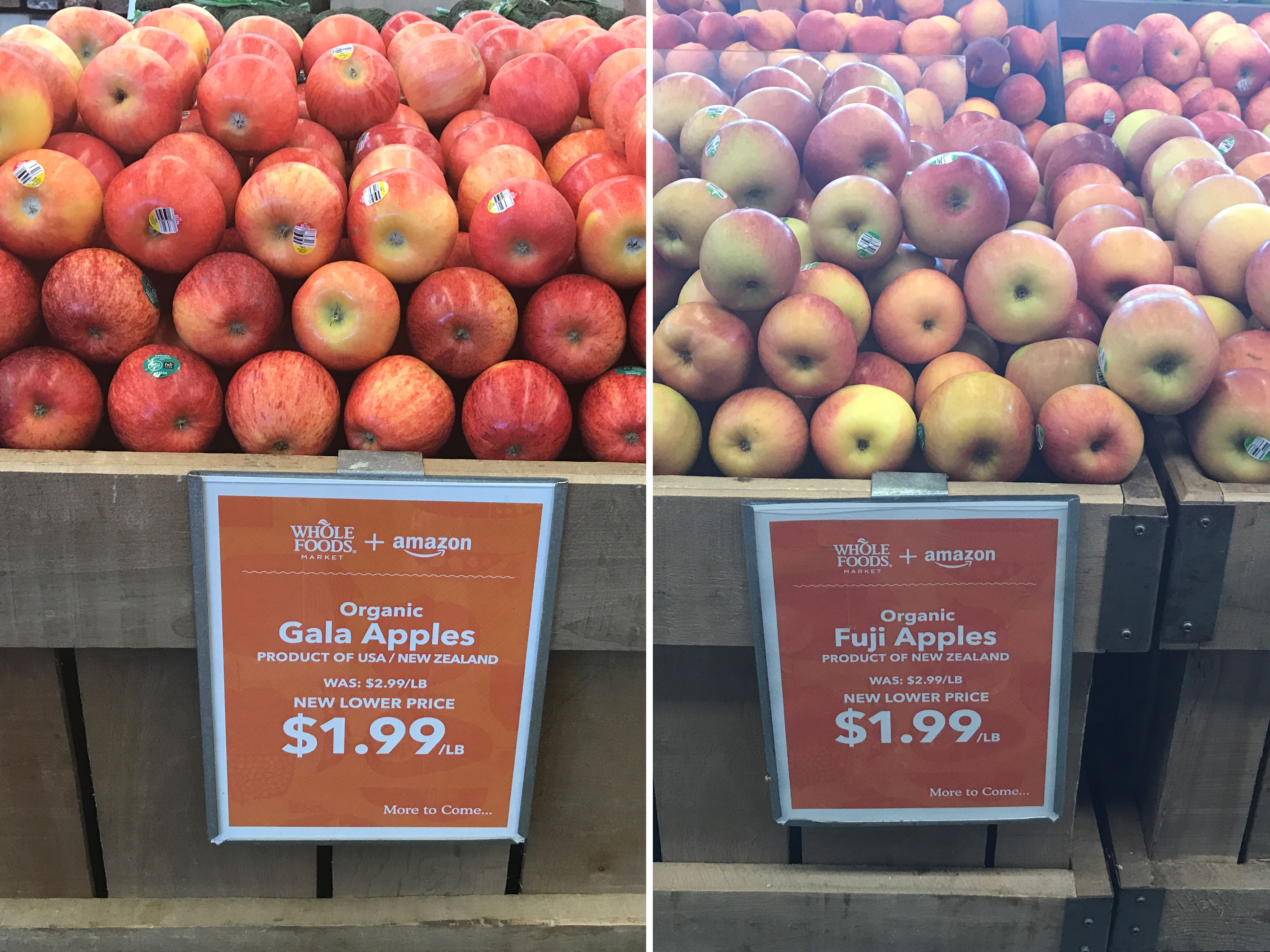 There’s still some bumps with that process — you can’t order every item available in Whole Foods, just what Fresh offers that week through the Amazon platform. The bags are also large and often don’t fill up to their full potential, leaving a lot of waste. But that’s like complaining you can’t get good WiFi on an airplane. It’s frustrating but you are flying through the sky and messaging people on the ground. Similar, you are ordering food through the air waves and it shows up at your door step. In the grand scheme, it’s amazing!

Anyway, yes, there are more conveniences for Amazon Prime members and further integrations with technology to make the shopping experience easier. It does also seem Amazon has hired more workers to fulfill the needs this technology creates. At my own market it seems tough to tell who is an Amazon worker rummaging through the aisles for listed items and who’s just shopping for themselves these days.

Is the marriage working? Tough to tell at this point. Those promised changes may seem exciting for both parties but between disappointed shoppers and a “clash” in culture it may not have been what Whole Foods faithful wanted. Still, at least some vendors have said they’ve seen an increase in sales and volume of products sold since the acquisition, despite the drop in prices. And Mackey, comparing his love for his wife with the relationship said in a recent interview “I don’t love absolutely everything about my wife, either, but on balance I love, like, 98%. That’s a pretty good ratio, based on my previous relationships.”

It might not even matter what loyal Whole Foods customers think. The acquisition gives Amazon an opportunity to introduce its 100 million Prime members to the grocery store it envisions — one that could drop organic, fossil fuel free groceries via drone at their doorstep in the future.

While it’s hard to know how the partnership has impacted Amazon’s bottom line overall, we do know sales going up and to the right is a good thing. We still need to see how this relationship performs over time but one year in looks promising.