Datree, an early-stage startup based in Israel, wants to help companies create a set of policies for their applications, and apply them in GitHub before a commit goes live. Today, it announced $3 million in seed funding from TLV partners.

The check was actually written last September, according to the founders, and they are making the investment public today.

Like many Israeli startups, before they wrote a line of code, they did their research talking to 40 companies, and found a common pain point in modern development techniques. Code was being committed ever faster and teams were more widely distributed. Instead of a monolithic application, you had containerized microservices, often being built by disparate teams. All of this came together in GitHub.

The team decided that the best way to deal with this kind of chaos was to try to bring some order to it by creating a catalogue of development teams and their work. The idea was to bring these teams and their work together in a central place, then apply a set of internal best practices to their code to catch any policy violations before they committed the code. It’s important to note that they only extract metadata to build this catalogue. 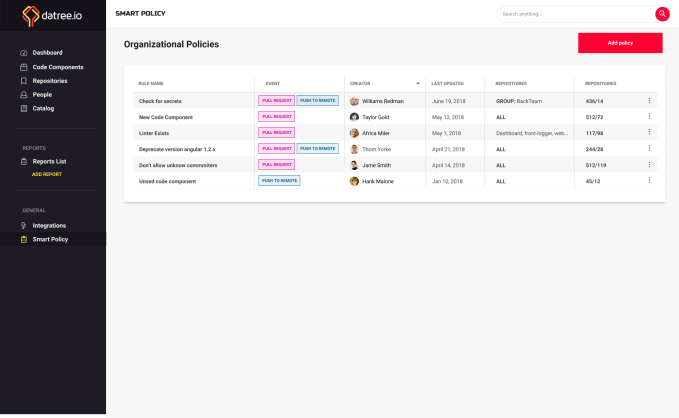 If you can use Datree to confirm that each pull request in GitHub complies with a set of internal policies in an automated fashion, you could potentially save your development teams a lot of pain trying to track down issues after the commit.

This is of course, the whole idea behind the DevOps model. The developers develop as fast as they can and operations is responsible for making sure the code is in decent shape, secure and complies with company policy before it gets published. Datree has created a report engine to scan all this code and report on what aligns with the policies and what doesn’t in an automated fashion. They also recognized that not every policy is rigid and that there will be exceptions, and they allow for that too.

Right now, it’s early days and the company consists of the three founders and 5 additional people “in a garage in Tel Aviv.” They are working with six design partners including HoneyBook, SimilarWeb and PlayBuzz on early versions of the solution, but they have a vision, and they have $3 million to build it out and see if it has a market fit. They plan to split their time between San Francisco and Tel Aviv as they attempt to expand their market.