Another analyst has Huawei overtaking Apple in the global smartphone rankings for the second quarter this year. The latest figures from Gartner put Huawei ahead on sales to end users in Q2.

According to Gartner’s figures, Samsung also lost share year-over-year — declining 12.7% in the quarter.

The Galaxy smartphone maker retained its no.1 spot in the rankings, with 19.3% in Q2 (vs 22.6% in the equivalent quarter last year) and ~72.3M devices sold. Though Gartner notes it’s being squeezed by “ever-growing competition from Chinese manufacturers”, while slowing demand for its flagships are squeezing its profitability. Not a happy combination.

In recent years Huawei has been one of a handful of Chinese OEMs bucking the trend of a slowing global smartphone market. And Gartner’s data suggests Huawei’s smartphone sales grew 38.6 per cent in the second quarter. 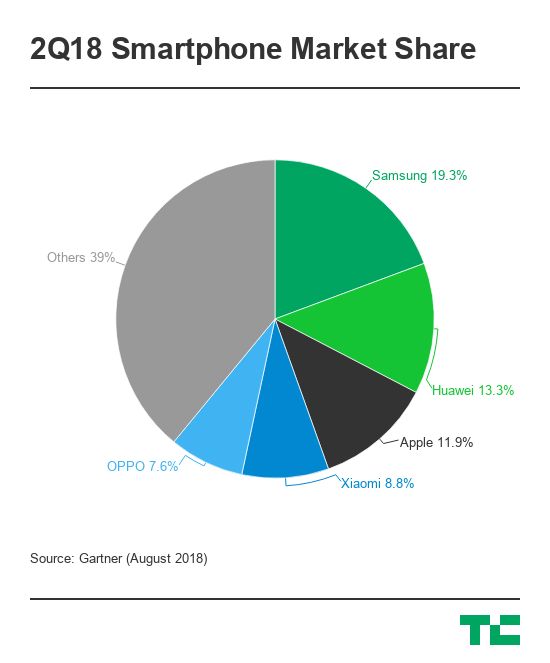 As we noted earlier this month, when other analysts reported Huawei outstripping Apple on smartphone shipments in Q2, the handset maker has built momentum for its mid-range Honor handset brand while performing solidly at the premium end too, with devices such as the P20 Pro (albeit while copypasting Apple’s iPhone X ‘notch’ screen design in that instance.)

“Huawei continues to bring innovative features into its smartphones and expand its smartphone portfolio to cover larger consumer segments,” said research director Anshul Gupta in a statement. “Its investment into channels, brand building and positioning of the Honor devices helped drive sales. Huawei is shipping its Honor smartphones into 70 markets worldwide and is emerging as Huawei’s key growth driver.”

For Apple the quarter was a flat one (0.9% growth), though that’s to be expected given Cupertino structures its mobile release cycle around a big-bang annual smartphone refresh in the fall, ahead of the holiday quarter, rather than releasing devices throughout the year.

Even so, Gupta noted that Apple is also facing growing competition from Chinese brands, which in turn is amping up pressure on the company to innovate its handsets to keep increasingly demanding consumers happy by delivering “enhanced value” in exchange for the iPhone’s premium price.

And recent reports have suggested Apple is prepping a number of iPhone design changes for fall, including a splash of color.

“Demand for the iPhone X has started to slow down much earlier than when other new models were introduced,” he added, sounding another note of concern for Apple.

Fourth placed Chinese OEM Xiaomi is one device maker putting pressure on longer term players in the smartphone market. In Q2 Gartner reckons the company sold ~32.8M devices, carving itself an 8.8% marketshare — up from 5.8% in the year ago quarter.

While the smartphone market is no longer a simple duopoly on the device maker front, with Huawei elbowing past Apple to bag the second spot in the global rankings, it remains very much the opposite story where smartphone operating systems are concerned.

And Gartner’s data now records the ‘other’ category of smartphone OSes at a 0.0% marketshare, down from 0.1% in the year ago quarter… 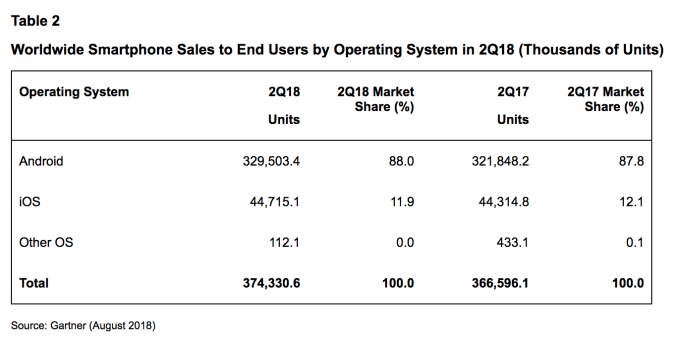