(Update: Axios has a post explaining why the cross-posted tweets disappeared. Essentially, Twitter deleted its app from Facebook after Facebook stopped allowing cross-posts earlier this month, since without that feature it was basically useless. This unexpectedly caused old posts to disappear. TechCrunch also heard from a source with understanding of the situation that the deletion of the app took Facebook by surprise, as well as the fact that Twitter didn’t immediately tell them to restore the content.)

Facebook users are complaining the company has removed the cross-posted tweets they had published to their profiles as Facebook updates. The posts’ removal took place following the recent API change that prevented Twitter users from continuing to automatically publish their tweets to Facebook. According to the affected parties, both the Facebook posts themselves, as well as the conversation around those posts that had taken place directly on Facebook, are now gone. Reached for comment, Facebook says it’s aware of the issue and is looking into it.

TechCrunch was alerted to the problem by a reader, Lawrence Miller, who couldn’t find any information about the issue in Facebook’s Help Center. We’ve since confirmed the issue ourselves with several affected parties and confirmed it with Facebook.

Given the real-time nature of social media — and how difficult it is to pull up old posts — it’s possible that many of the impacted Facebook users have yet to realize their old posts have been removed.

In fact, we only found a handful of public complaints about the deletions, so far.

@facebook I used the Twitter for Facebook app for years, and I realize it's not working and isn't going to. But I just discovered all the Facebook updates it put have been deleted and dissappeared from my timeline! Is there a way to retrieve this?

Above: selected complaints from Twitter about the data loss 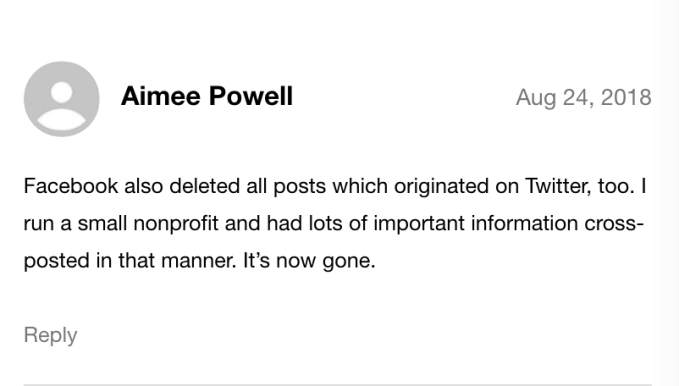 Some of those who were impacted were very light Facebook users and had heavily relied on the cross-posting to keep their Facebook accounts active. As a result of the mass removals, their Facebook profiles are now fairly empty.

TechCrunch editor Matthew Panzarino is one of those here who was impacted. He points out that the ability to share tweets to Facebook was a useful way to reach people who weren’t on Twitter in order to continue a discussion with a different audience.

“I’ve had tweet cross-posting turned on for years, from the early days of it even existing. This just removed thousands of posts from my Facebook silently, with no warning,” Matthew told me. “Even though the posts didn’t originate on Facebook, I often had ongoing conversations about the posts once my Facebook friends (and audience) saw them. Many of them would never see them on Twitter either because they don’t follow me or they don’t use it,” he said.

“It’s wild to have all of that context just vanish,” he added.

As you may recall, Facebook earlier this month made a change to its API platform to prevent third-party apps from publishing posts to Facebook as the logged-in user. The change was a part of Facebook’s larger overhaul and lockdown of its API platform in the wake of the Cambridge Analytica scandal, where as many as 87 million Facebook users had their data improperly harvested and shared.

Since then, Facebook has been trying to plug up the holes in its platform to prevent further data misuse. One of the changes it made was to stop third-parties from being able to post to Facebook as the logged-in user. 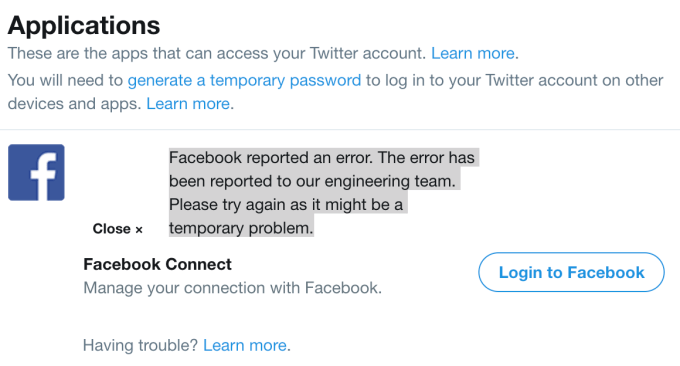 Above: Twitter’s cross-posting feature, on the day it was disabled by the Facebook API change

In theory, the API changes should only have prevented Twitter users from continuing to cross-post their tweets to Facebook automatically. It shouldn’t have also deleted the existing posts from Facebook users’ profiles and business users’ Facebook Pages.

This is a breach of trust from a company that’s in the process of trying to repair a broken trust with its users across a number of fronts, including data misuse. Regardless of whatever new policy is in effect around apps and how they can post to Facebook, no one would have ever expected that Facebook would actually remove their old posts without warning.

We’re hoping that the problem is a bug that Facebook can resolve, and not something that will result in permanent data loss.

Facebook tells us while it doesn’t have further information about the problem at this time, it should have more to share tonight or tomorrow about what’s being done.