It’s no surprise that political discourse in America is divided — especially online. And last week in MIT Technology Review, data visualization company Graphika brought those divides to life with 3D, colored depictions of the kind of filter bubbles found on Twitter in the U.S.

Co-written by Graphika’s CEO John Kelly and the company’s research director Camille François, the graphics imagine Twitter users as colored orbs (larger or smaller depending on their follower sizes) and groups them depending on who follows whom.

The authors told TechCrunch that to create these particular data visualizations they used data from about 13,500 of the best connected accounts following members of Congress and national-level official political party accounts. Other starting places, such as singular states or grassroots parties, also illustrated these looming national echo chambers, the authors said.

The visuals help bring into stark realization some predictable trends. For example, there is essentially zero crossover in followers between extreme Trump supporters and people who are extremely anti-Trump. The progressive movement is strongest in its connections between Democrats and left-wing journalists, but has some connections on the conservative sphere, as well. 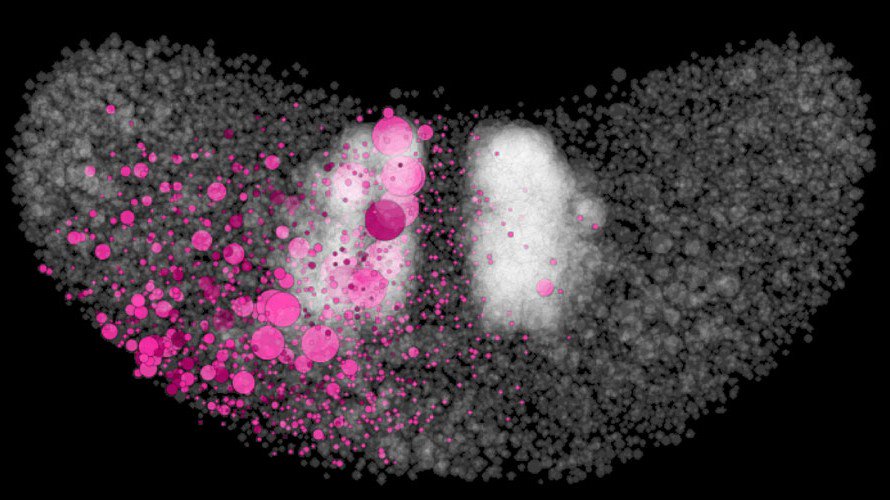 One interesting point that the graphic does bring into focus is that, despite our preconceptions of either the entire left or the entire right representing a singular ideology, in fact it’s primarily accounts on the far edge of these groups who do most of the talking. The authors point out that for some of these accounts, the high and identical numbers of tweets point toward a bot instead of an actual user.

This kind of polarization is exactly what makes it possible for bad outside actors (like Russia) to influence political discourse and action in a social sphere. Instead of targeting the middle of the spectrum — where users are generally quieter and generally less strictly partisan in their views — these actors can engage with polarized communities, gain their trust and introduce new or exacerbating ideologies.

“It’s the digital equivalent of moving to an isolated and tight-knit community, using its own language quirks and catering to its obsessions, running for mayor, and then using that position to influence national politics,” the authors write.

If these data point to anything, it’s that it’s time we begin to value listening over talking.

“The extremes are screaming while the center whispers,” the authors told TechCrunch.

It’s human nature to want to confirm your beliefs with those who agree with you, especially in times of uncertainty or fear. However, by retreating to echo chambers that are being infiltrated with bad actors, we’re doing nobody a favor, least of all ourselves.