Whatever criteria we look at, whether it’s schools with the highest number of well-capitalized founders, highest funding totals or even where startup investors went to college, the same names top the list. The only surprise factor, it seems, is whether Harvard or Stanford will be in first place.

It’s possible we’ll do a data-driven university- and startup-related ranking that doesn’t feature the same two schools in the top two positions. But that’s not happening today, as we look at universities with founder alumni who have raised the most venture funding.1

Luckily, there are more than two names on the list. In this survey, we looked at the top 15 schools ranked by alumni who have raised the most venture funding for their startups in roughly the past year.

This is a follow-up to our earlier piece, which ranked U.S. universities according to the number of funded startup founders who raised $1 million or more in the survey period. The results, however, feature most of the same names, and an only slightly altered order.

Take a look for yourself below. The chart includes the name of the school, the total known venture capital funding raised by alumni founders since August 1, 2017, and the most heavily funded companies. 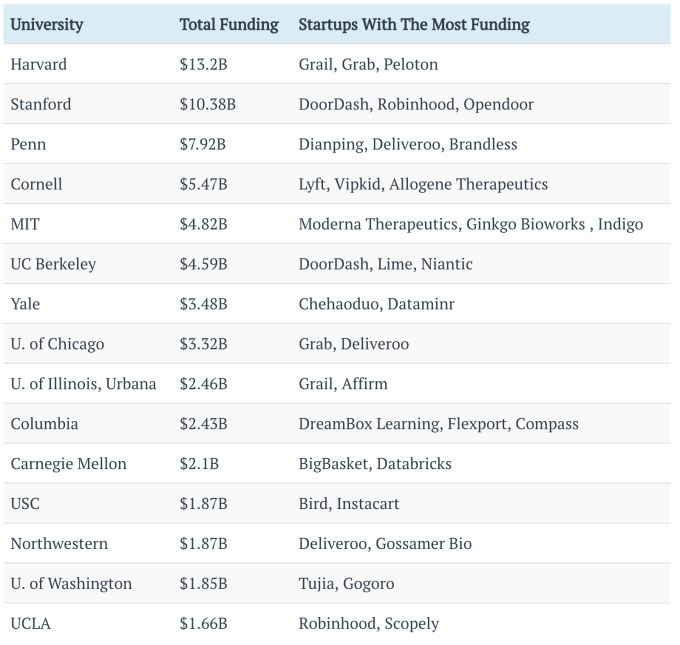 In the survey results, we included universities and affiliated business schools together. This significantly bumped up the totals for universities with well-known business schools, like Harvard and the University of Pennsylvania (home of the Wharton School of Business).

Additionally, a number of funded founders have degrees from more than one university in the ranking. These entrepreneurs are counted once for each university.