Here is a strange little online community to puzzle at. Amazon has developed an unnerving, Stepford-like presence on Twitter in the form of several accounts of definitely real on-the-floor workers who regurgitate talking points and assure the world that all is right in the company’s infamously punishing warehouse jobs.

After Flamboyant Shoes Guy called out the phenomenon, I found 15 accounts (please don’t abuse them — they get enough of that already). All with “Amazon smiles” as their backgrounds and several with animals as profile pictures. All have the same bio structure: “(Job titles) @(warehouse shorthand location). (Duration) Amazonian. (2- or 3-item list of things they like.)” All have “FC Ambassador📦” in their name. All have links to an Amazon warehouse tour service.

And all ceaselessly communicate upbeat messages about how great it is to work at an Amazon warehouse and assuring everyone that they are not being forced to do this. The messages all seem cut from the same cloth, frequently along the same exact patterns:

Hello! I work in an Amazon FC in WA and our wages and benefits are very good. Amazon pays FC employess ~30% more than traditional retail stores and offers full medical benefits from day 1. Working conditions are very good- clean/well lit- Safety is a top priority at my facility!

Did you know that Amazon pays warehouse workers 30% more than other retailers? I feel proud to work for Amazon – they've taken good care of me. Much better than some of my previous employers.

On the contrary, we Amazon employees get paid very well.
In fact Amazon pays fulfillment center employees ~30% more than traditional retail stores. On top of that we also get full health benefits that includes dental & vision! I almost forgot to mention…we also get stocks! 💰

The workers say that they don’t receive compensation for being ambassadors; it’s a “totally optional role” they have taken on voluntarily (Update: it’s a bit more complicated than that — see below). They also claim to be warehouse employees in the ordinary sense. If so, they’re putting their numbers at risk by taking the time out to bang out long tweets hourly on how great they’re doing. 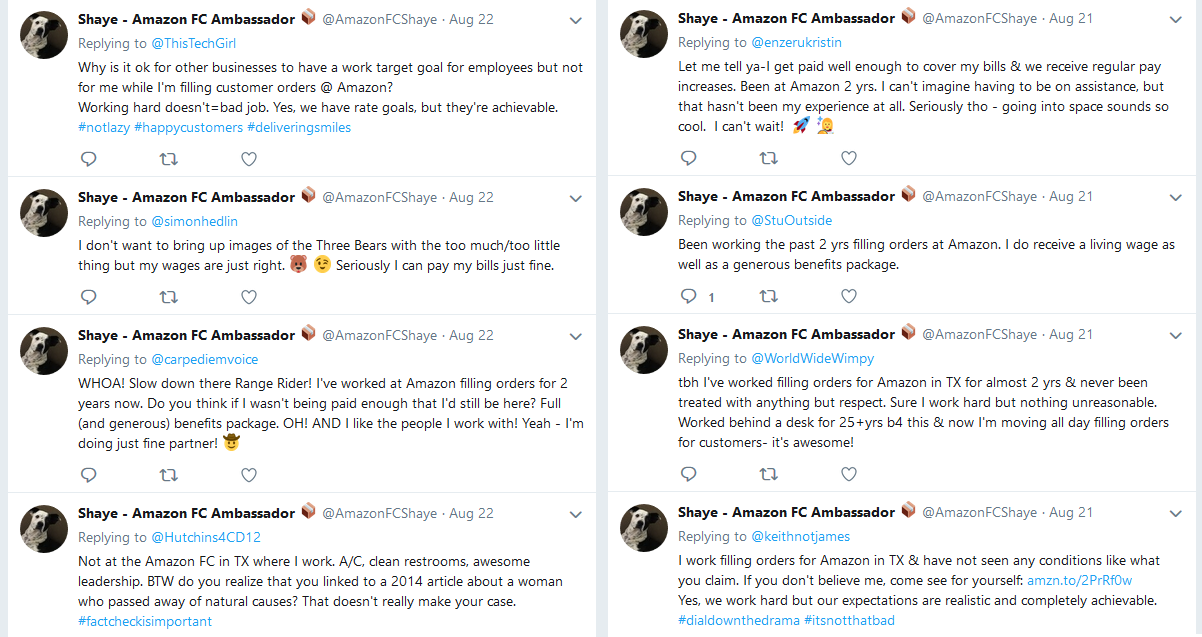 Their most frequent topics of conversation are how they get bathroom breaks, the pleasant temperature of the warehouses, the excellent benefits and suitable wages, friendly management and how the job isn’t monotonous or tiring at all. FC Ambassador Carol, for example, is downright elated to be a picker, and is clearly a Bezos admirer.

I love "couch shopping!" It's ALMOST as much fun as being here at work in the FC. As a picker, we get to see all the unique things people purchase. It keeps the night interesting, waiting to see what is going to come across my screen next.

Amazon has really developed into something pretty amazing since it's start in 1994. And I, for one, am sure glad it did. I have been with the co just over a year, now and wouldn't trade my time in the FC for anything.

I can safely say that none of MY ideas have panned out anywhere near what Jeff Bezos has accomplished. I am more than happy, though, to continue working here, at BFI4, in WA. I receive a (more than fair) wage and work with some really good people. Making history, every day.

You can practically hear the smile on her face.

I have a friend who worked as a picker for a while, admittedly some years back. He said it was some of the most mind-numbing yet physically demanding work he’s ever done. I understand that some folks may just be happy to have a job with full pay and benefits — I’d never begrudge anyone that — but the unanimous and highly stilted positivity on display in these ambassador accounts really seems like something else.

It’s no secret, after all, that Amazon has an image problem when it comes to labor. Reports have for years described grueling labor at these “fulfillment centers,” where footsore workers must meet ever-increasing daily goals, their time rigidly structured and room for advancement cramped. Just recently Gizmodo’s Brian Menegus has had a couple of great stories on current — not past — labor conditions at the company, and of course there have been dozens of such stories detailing exploitation or generally poor conditions over the last few years. And not just here in the U.S., either.

Certainly Amazon may have improved those conditions. And certainly they would want to get the message out. But these accounts are equally certainly not the grassroots advocacy they seem to be. (There’s already a parody account, naturally, or perhaps one of the ambassadors slipped the leash.)

I’ve asked Amazon for more details on what this program really consists of, and how it comes to pass that warehouse workers are being not paid to monitor Twitter, regularly rebutting critics with clearly canned stats and the kind of forced humor one would imagine they would indulge in if their overalls hid a shock collar. I’ll update this post if I hear back.

The program just started a couple weeks back; there are apparently 14 total, not 15 — either I can’t count or I mistook an inactive or fake one for the real thing. Several have also disappeared from the original collection since last night.

When I was there they just got an extra paid day off and a gift card after Peak [pre-holiday season]. This is what I got. A paid day off (that expired in 3 weeks lol) and a $50 Amazon gift card. Plus, they gave us lunch. Coldcuts and sandwich bread. I absolutely did not get paid more to train people.

Ambassador isn’t a ‘job’ you do every day, its just something you are trained to do. You go to a 4 hour class and they teach you how to teach others to tie a knot using a set of instructions. This is how new hires a supposed to be taught. You are supposed to teach them right from a script using a set protocol. Becoming an ambassador was a way to get out of loading trucks, or packing boxes for 10 to 12 hrs. You may ambassador 1 day then unload trucks for the next 3.

I stopped doing it after the first year I was there because it didn’t pay more. It’s voluntary. Your manager picks them. Generally speaking ambassadors are the “kiss asses” of the department.

In case it isn’t obvious, Chris is no longer at Amazon and is happy to speak his mind. Thanks for helping us clear this up, Chris.