Amazon acquired social reading service Goodreads five years ago, squelching the life out of the competitive landscape, as minimal as it was. So it’s promising to see a new app appear with the goal of getting more people to move off of Goodreads for social book recommendations. That app is Inky, built by two bookworm friends who wanted a better way to track their reading and find recommendations of what to read next.

The app is very much an indie effort for the time being, and not as polished as a similar app, Reco. However, it works well for those who are looking for a simple way of tracking their “read” list along with their “to read” list, and who want a way to see what other good books people are into right now.

After asking around about what people actually want in an app for readers, he recruited his friend Mike Salvador to help build it. Both just graduated from college, and have decided to work on Inky full-time.

“No one knows who we are,” Bruno says. “We’re definitely not funded.”

But, he adds, they’re updating the app every few days and getting “little sleep in the process.” 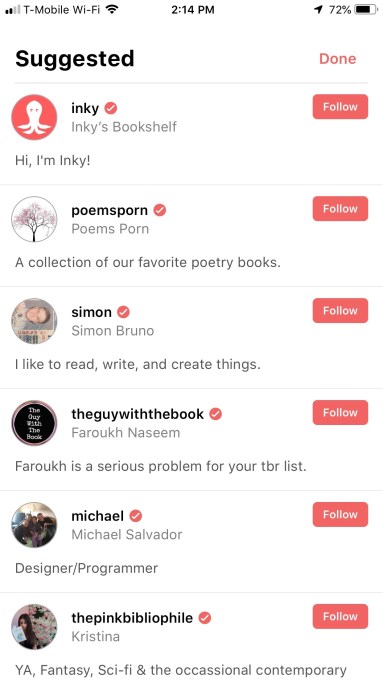 Currently, you can sign up for Inky using Facebook or email, and then you’re presented with some pre-selected users to follow. You can check or uncheck these suggestions as you choose. There aren’t many users on the app at present, beyond around 1,000 early adopters and some Instagram book nerds, the co-founder notes. So you may want to at least seed your network with a few of them.

You can then fill out your two bookshelves  — “read” and “to read” — with books, by searching for titles. Once added, these are presented in a visual format, similar to how Slice Bookshelf looked back in the day before its untimely demise. You also can tap on books’ covers to read a description, giving you the feeling of picking up a book at the store and reading its jacket. 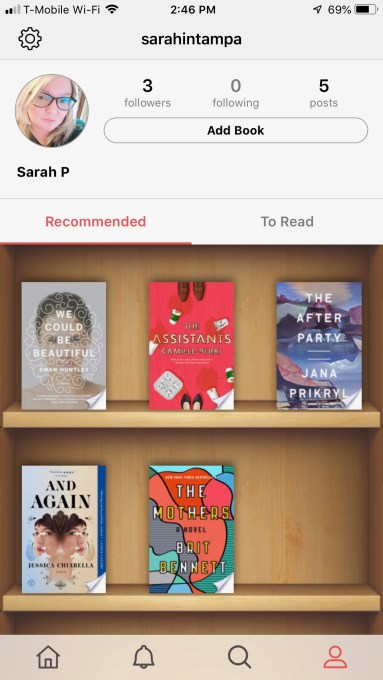 Unfortunately, the app only presents the new recommendations from those you follow and not their recommendation history in its home feed; but you can visit users’ profiles to check their lists until friends post something new.

The founders say their goal right now is to take in user feedback, then build what they hear people want. They aren’t looking to make money off Inky just yet.

“The goal is to partner with publishing houses to help launch new titles, similar to Goodreads’ business model,” says Bruno. “Once we’re confident we have something people absolutely love, we’ll turn our heads towards monetization,” he says.

However, their vision is not to reproduce Goodreads in a more modern format. That is, Inky is not meant to be a catalog of all the books you’ve ever read, but rather a place for you to show off the books you think should be read. For that reason, the team won’t offer a Goodreads import mechanism. Instead, its focus will be on recommendations. 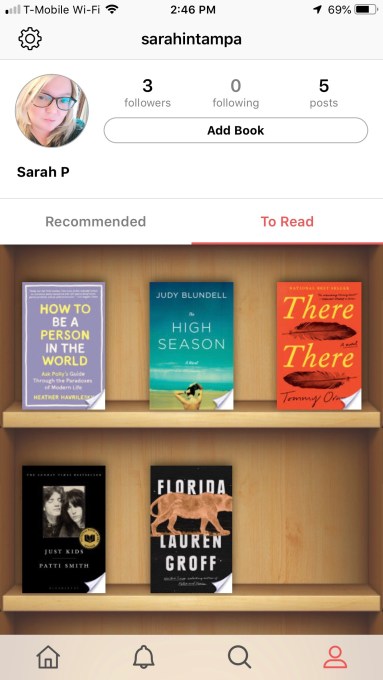 That may make sense to a point, but there are times you want to read a book and then are unpleasantly disappointed by it. Your negative reaction is just as valuable to your network of book readers as are your recommendations.

As an occasional Goodreads user myself, I can’t see making a full switch to Inky. I miss the “Currently Reading” shelf, the book lists, the discovery features and, of course, the much larger community. But Inky is one to watch as it grows.

Inky is currently available on iOS, but the team says an Android version is the works.