Facebook’s vice president of partnerships Dan Rose will leave the company early next year. Rose announced the move on his public Facebook page, indicating that he would stay on through Mobile World Congress in February.

During his long tenure at the company, Rose oversaw Facebook’s transformation into a media giant, steering it toward partnerships with TV networks and traditional news publishers.

In a comment on his announcement, Facebook COO Sheryl Sandberg summarized Rose’s influence on Facebook’s direction over the years.

“Your idea that we should be a partnership company and work closely with others in the industry has been key to some of our greatest successes,” Sandberg said. “I’ve been lucky to have you not just as a colleague but a friend – and you will always be a part of the Facebook family.” 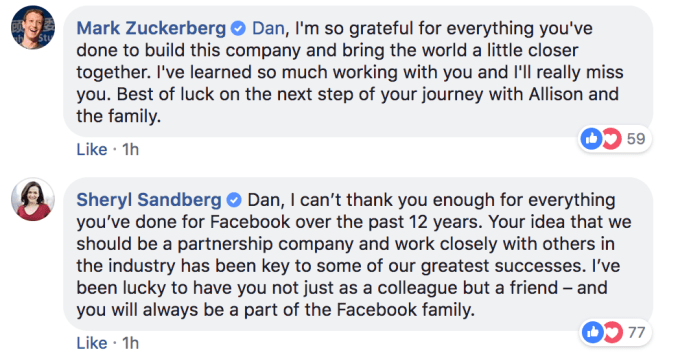 Per his Facebook post, Rose will step down from his post to spend more time with his wife and children, who relocated to Hawaii a year ago.

“Mark and Sheryl changed my life and my career. I would walk through fire for them, or fly across the ocean on a regular basis,” Rose said. “But they deserve someone in my role who is present and fully engaged every day in the many opportunities and challenges that lie ahead.”

Rose sounds like he’ll be involved in the search for his replacement and the transition, leaving the door open to remaining involved and “helping Facebook from a distance.”

Prior to his time at Facebook, Rose spent seven years at Amazon as a director of business development in the Kindle’s early days. Rose is the latest major departure announcement from Facebook in recent months, following the planned exit of chief legal officer Colin Stretch and chief security officer Alex Stamos.

You can read Rose’s full announcement, embedded below.

I have some news to share about my personal situation. I am moving to Hawaii and transitioning out of my current role at…