If you want to have a brutal workout from the comfort of your own home — and have about $3,000 to spend — look no further. Tonal, a strength-training system powered by electromagnetism resistance technology and machine learning, is launching today to let you get ripped and in shape without having to go to the gym.

There are two key features that make Tonal different from the weightlifting machines you’ll find in the gym. For one, there aren’t actual weights. Instead, Tonal uses electromagnetism to simulate and control weight.

So when you’re doing a bicep curl, for example, “the thing pulling back on you isn’t gravity — it’s an electromagnetic field controlled by a computer algorithm,” Tonal CEO and founder Aly Orady told me at the company’s San Francisco headquarters last week. “It’s digitally controlled weight.”

The other key feature is the built-in personal trainer. For $49 a month, Tonal members get access to personal training sessions, recommended programs and workouts.

“It’s like having an entire gym and a personal trainer in your home,” Orady said. “That’s a pretty big claim, but I’m going to show it to you and you’re going to love it.”

He was right. I loved it in a pure-hate kind of way. I had a chance to try it out and I feel confident saying I had the worst day of my year — but, you know, in a good, yet sadistic way. It’s just that I’m horribly out of shape and this machine isn’t messing around.

Tonal works by first determining your baseline strength with a 10-minute test. The test entails completing four movements (seated lat pulldown, seated overhead press, bench press and neutral grip dead lift) as fast and as powerful as you can. From there, Tonal gives you a baseline score for your core, upper body and lower body.

As you can see from my results below, I’m very strong. 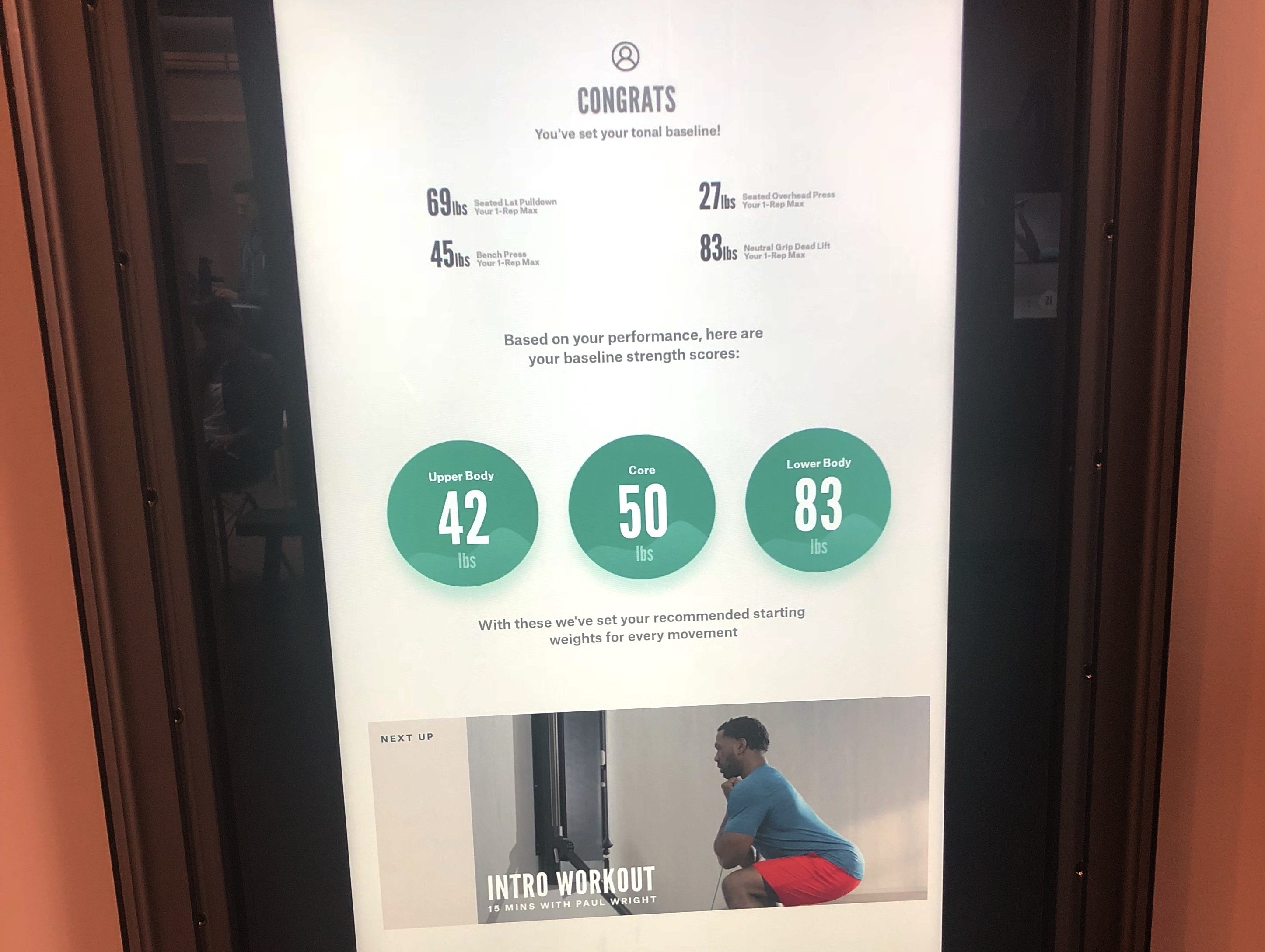 But seriously — my trainer told me I was very strong. From there, I completed my first workout. And that’s when I realized that while I may be strong, my endurance is non-existent.

As I made my way through my first workout, Tonal could automatically tell that I was on the struggle bus headed further into struggle town. That’s because Tonal was constantly monitoring the quality of my reps and, based on that, dynamically adjusted the weight.

Tonal, which mounts to your wall like a TV, is pretty pricey ($2,995), but it joins the likes of startups like Peloton and Mirror. Peloton is an internet-connected cycling bike that retails for $1,995 plus $39 a month for content, while Mirror is similarly an at-home device that lets you see video of a fitness instructor and classmates for exercises like barre, yoga and pilates. Mirror has raised $13 million from Spark Capital, Lerer Hippeau Ventures, First Round Capital and others. The company, however, has yet to launch its product and pricing.

Tonal is not disclosing its amount of funding, but has raised money from Mayfield, Shasta, Bolt Capital, Next Play Capital, Upside Partnership and others.