In an effort to provide more transparency and deliver on a promise to Congress, Google just published an archive of political ads that have run on its platform.

Google’s new database, which it calls the Ad Library, is searchable through a dedicated launch page. Anyone can search for and filter ads, viewing them by candidate name or advertiser, spend, the dates the ads were live, impressions and type. For anyone looking for the biggest ad budget or the farthest reaching political ad, the ads can be sorted by spend, impressions and recency, as well. Google also provided a report on the data, showing ad spend by U.S. state, by advertiser and by top keywords. 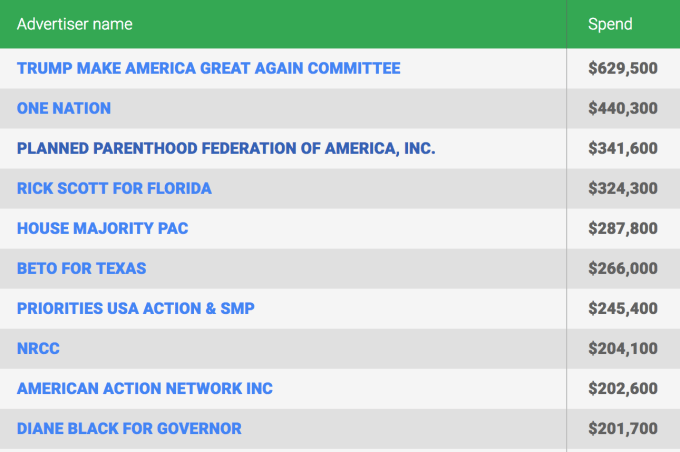 The company added a bit of context around its other recent ad transparency efforts:

Earlier this year, we took important steps to increase transparency in political advertising. We implemented new requirements for any advertiser purchasing election ads on Google in the U.S.—these advertisers now have to provide a government-issued ID and other key information that confirms they are a U.S. citizen or lawful permanent resident, as required by law. We also required that election ads incorporate a clear “paid for by” disclosure.

The search features are pretty handy, but a few things are missing. While Google’s database does collect candidate ads in the U.S. it does not include issue ads — broader campaigns meant to influence public thought around a specific political topic — nor does it collect state or local ads. The ads are all U.S.-only, so elections elsewhere won’t show up in here either. Google says that it is collaborating with experts on potential tools that “capture a wider range of political ads” but it gave no timeline for that work. For now, ads that the tool does capture will be added into the library on a weekly basis.