DC Universe’s digital subscription and streaming service has just appeared on Google Play, ahead of its planned fall 2018 release. Announced in late June, the service includes a streaming library of original programming like a live action version of “Teen Titans” and several other shows; plus a selection of DC animated movies, classic TV series like “Wonder Woman,” the four Christopher Reeve-starring Superman films; and a host of other content like a lineup of digital comics, an online forum, and more.

So far, interested users can only sign up to pre-order the service, and that, apparently, has not changed. However, the company has said that it would begin a beta test in August, and the app’s launch appears to be the first indication that’s about to kick off.

One screen, for example, shows a board within the community section where beta users can offer feedback. 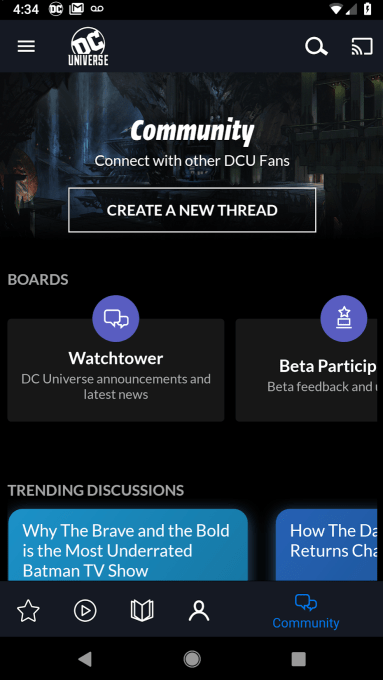 The Google Play version of the app is listed as “Unreleased,” but you are able to now download it to supported Android devices. Unfortunately, you’re not able to view its content without becoming a beta tester – even if you signed up to pre-order the new subscription service. When we tested this, we were instead directed to a placeholder screen after logging in that says: “Your Universe Begins Fall 2018.” (Don’t worry, Oath corporate Expense Account auditors – I’ll cancel this. I’m just trying to do my job here, okay? Please don’t email me.)

The new app was released on Monday, and because it’s still not usable by the general public, it has no reviews. It also has no app description in its current state. 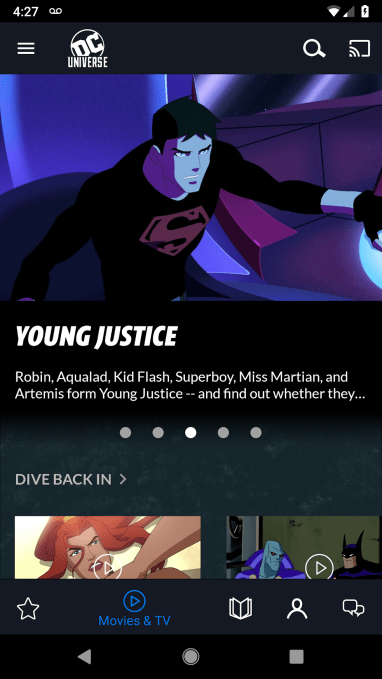 The app’s screenshots do give a sense of how the subscription service will look and feel, though. It opts to default to a dark theme, and has both a hamburger navigation and a bottom bar.

The navigation bar at the bottom offers links to “Movies & TV” and a “starred” section of favorites. Off to the right are links to the comics, an account info screen, and the online community. These buttons are not fixed, it seems, and scoot closer together or further apart, depending on what’s tapped. This gives it an uneven feel, aesthetically speaking. (It sorta kills me.)

Like most streaming services, the app also supports the ability to pick up where you left off, with features like “dive back in” and “continue watching.” And underneath the titles themselves are not just the episode lists and details, but also a link to the community.

There’s an Encyclopedia that lets you read the heroes’ backgrounds, another screen shows, plus digital comics to download, and a simple rating system involving a thumbs up icon. 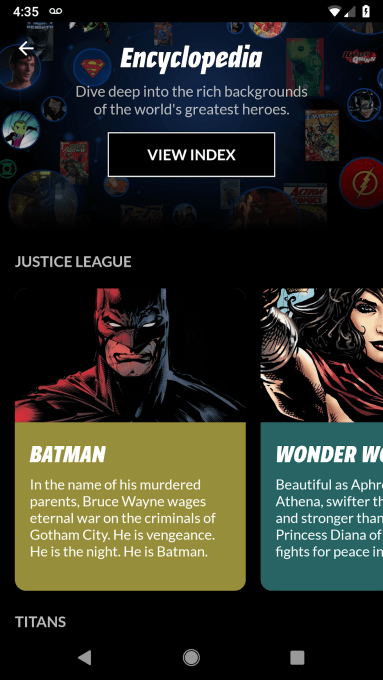 DC Universe hasn’t publicly announced that the beta test has launched, but fans should probably keep their eyes peeled.

Update: DC Universe responded to a request for comment, and said that the beta test “date and details will be shared in the near term.”

The app is expected to stream content across platforms, including iOS, Android, Roku, Apple TV, Amazon Fire TV, Android TV and the web when it goes live this fall.