Y Combinator has invested $120,000 in Mac’d, a build-your-own mac and cheese restaurant that lets customers choose their own adventure from the beginning. I popped over to one of the Mac’d locations last week in San Francisco to get my mac on and chat with the founders.

For starters, the mac and cheese was bomb. Sure, one could argue it’s hard to mess up mac and cheese, but it’s somehow been done before. Trust me, I know this from firsthand experience.

I opted for a relatively basic mac and cheese with what Mac’d calls its “#Basic” sauce, which is a blend of cheddar cheeses, a spice mix and a hint of asiago. From there, I selected a combination of a shells and elbow noodle base. For those who are gluten-free, Mac’d also offers a cauliflower base. Next, I picked my mix-ins. Again, I’m super basic, so I just went with bacon and topped it with pulled pork and breadcrumbs.

Although the restaurant is tech-enabled, it’s less of a tech play and more of a restaurant play, Mac’d founder Chen-Chen Huo (pictured above on right) told TechCrunch.

“I wouldn’t necessarily say with full confidence that we’re a tech company but we’re a company that participates in a lot of tech and integrates tech into the production of our product to grow the business,” Huo told me.

Mac’d currently has two brick-and-mortar locations, both of which are in San Francisco. Mac’d is also available in Portland through what Huo describes as a ghost kitchen. In fact, ghost kitchens are part of the company’s expansion plans for at least the next 12 months, as it aims to be in about five to seven cities. 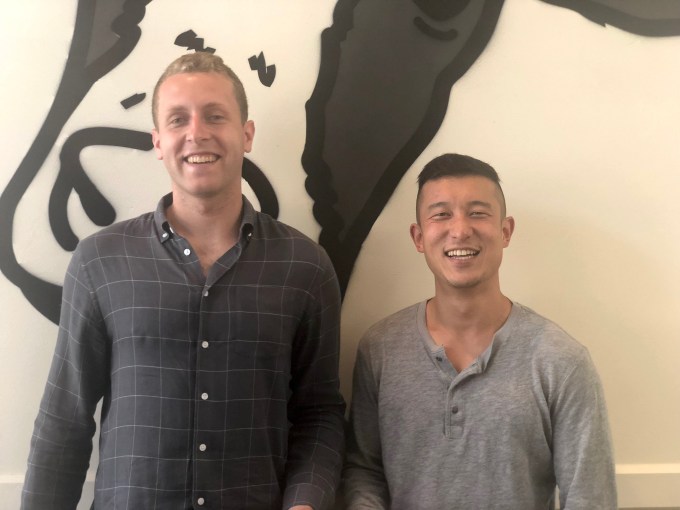 “How we plan to do that isn’t necessarily building out more brick-and-mortars in these cities but our expansion strategy sort of ties into that idea of cloud kitchens — sort of like ghost kitchens,” Huo said. “Essentially we move into commissary kitchens and hop on to existing catering and delivery networks and serve our customers like that.”

In Portland, Mac’d rents out some kitchen space and sells its mac and cheese strictly through providers like UberEats, Caviar, DoorDash, Postmates and others.

The idea is that once Mac’d determines some of the patterns of a specific market via its low-capital ghost kitchen approach, the company can make a more informed decision of where to open a brick-and-mortar location. Eventually opening brick-and-mortar locations in cities is important, Mac’d co-owner Antony Bello (pictured above on left) told TechCrunch, because it helps build up the brand and get people on board with the experience.

“It’s an interesting new wave of restaurants,” Bello said. “As far as marketing strategies, it’s more salient to come in and experience the food because you get a better sense of the kind of people that are behind this. Putting a face behind it is more difficult if it’s all online and digital.”

Mac’d got its start by doing a series of pop-ups in San Francisco last January. The mac and cheese restaurant opened its first permanent location in July 2017, located in San Francisco’s Marina district. That first location, Huo said, was entirely bootstrapped — in part thanks to the money earned through the pop-ups. Mac’d was able to open its second brick-and-mortar location a couple of months ago in June, funded solely off the profits of its first location.

“Theoretically, if we were to continue this trajectory, we could continue to bootstrap and continue to organically grow,” Huo said. “But if there’s anything about going through YC, it’s realizing the power and benefits of expanding quickly but also efficiently and thoughtfully, and taking it one step at a time.”