Facebook is making it easier for kids to add their friends on its under-13 chat app, Messenger Kids. Starting today, the company is rolling out a new feature that will allow kids to request parents’ approval of new contacts. To use the feature, parents will turn on a setting that creates a four-word passphrase that’s used generate these contact requests, the company says.

Parents can opt to use this feature, which is not on by default.

Once enabled, Facebook will randomly generate a four-word phrase that’s uniquely assigned to each child. When the child wants to add a friend to their app’s contacts list in the future, they will show this phrase to the friend to enter in their own app.

Both parents will then receive a contact request from their child – and both have to approve the request before the kids can start chatting. In other words, this doesn’t represent a loosening of the rules around parental approvals – all contact requests still require parents’ explicit attention and confirmation, as before. 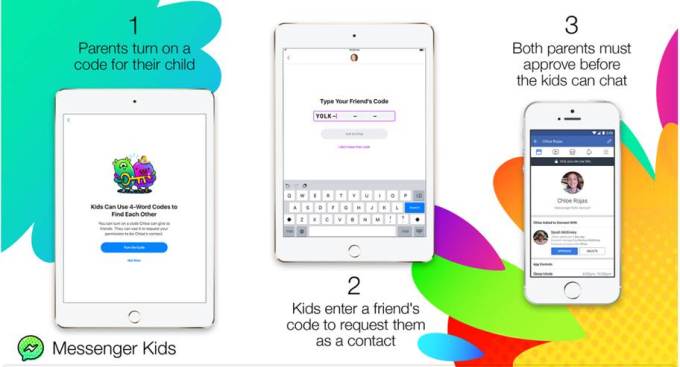 However, it does make it easier for kids to friend one another when their parents aren’t Facebook friends themselves. That’s been an issue with the app for some time, and one Facebook first started to address in May when it made a change that finally no longer required parents to be friends, too.

While most parents will at least want to know who their child is texting with, there are plenty of times when parents are friendly with someone on a more casual basis – like through the child’s school or their extracurricular activities. But just because two people are neighbors or fellow soccer moms and dads, that doesn’t necessarily mean they’re also Facebook friends.

The change introduced in May allowed parents to do a search for the child’s friend’s parents, then invite them to the app so the kids could connect. But this still required parents to take the initial steps (at the urging of the child, of course). It was also confusing at times, we found when we tried it for ourselves – some parents we connected with couldn’t figure out how the approval process worked, for example.

That being said, it may have helped to give the app’s install base a big boost, along with its expansion outside the U.S. According to data from Sensor Tower, Messenger Kids saw a sizable increase in installs in the beginning of early June and it has just now passed 1.4 million downloads across both iOS and Android. In addition, its daily downloads are around 3x what they were at the end of May.

The passphrase solution will make things a bit easier on parents, because contact requests will be initiated by the kids. Parents will only have to tap a big “Approve” button to confirm the request (or deny it, if the request is inappropriate for some reason.)

The four-word passphrase will only be visible to the child in the Messenger Kids app, and to the parent in their Parent’s Portal.

It’s worth noting that Facebook opted for a passphrase instead of a scannable QR code, as is common in other messaging apps including Facebook Messenger, Snapchat and Twitter, for instance. Facebook says this is so kids can exchange the passphrase without the device being present.

Messenger Kids is a controversial app, but its adoption is growing, the data indicates. Parents have been starved for an app like this – one allowing for conversation monitoring (you just install your own copy) and contact approvals. Whether this will actually indoctrinate a new generation of Facebook or Messenger users is more questionable. It’s likely that when kids outgrow Messenger Kids, they’ll still be switching over to Facebook’s Instagram and Snapchat instead.

The passphrase feature is rolling out starting today on the Messenger Kids mobile app.