It’s almost unheard of to see three unicorns join forces to fund a startup, but that’s exactly what has happened in Indonesia.

Ride-hailing company Go-Jek, e-commerce firm Tokopedia and travel booking startup Traveloka — each of which is valued in the billions of U.S. dollars — have come together to provide a Series A funding round for PasarPolis, a digital insurance startup in Indonesia aiming to tap Southeast Asia’s growing internet economy.

PasarPolis started out as an insurance comparison site but today it offers micro- and modular-insurance online. Go-Jek, Tokopedia and Traveloka are three of its major clients through which it offers ‘click box’ policies that are bundled with ride-hailing trips, e-commerce sales and travel deals.

The round itself is undisclosed but TechCrunch understands that it is in range of $5-8 million, as was earlier reported by Deal Street Asia.

PasarPolis founder and CEO Cleosent Randing told TechCrunch in an interview that the deal was strategic and aimed at developing new products with the three companies, which he estimates provide “access to 100 million insurable hits per month.” He said that the startup could be picky because it is already cash flow positive.

“We were very very selective with this round, it’s something we are keeping quite low profile,” he explained. “It’s more of how we can be the provider of choice for the largest digital companies in Indonesia… we feel it’s a strategic investment and collaboration to advance micro insurance via the internet.

“Do they believe in the vision and can they help make the vision a reality but giving customers much cheaper, more modular insurance which is more relevant in today’s digital economy?” he added. 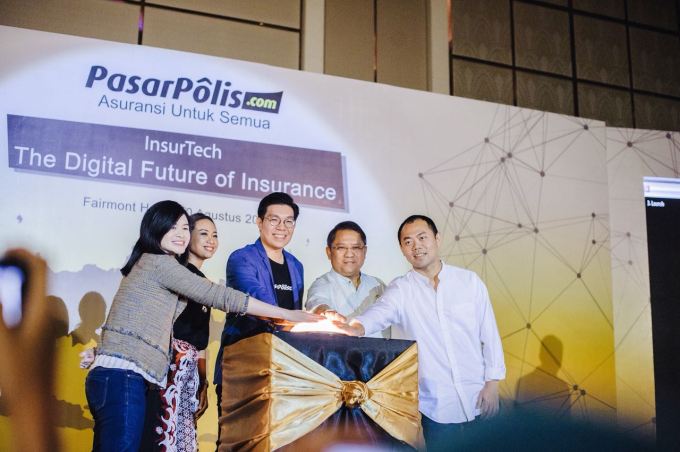 Beyond obvious consumer-focused products, PasarPolis has developed programs such as life insurance for Go-Jek drivers, and health care initiatives for SMEs that sell product on Tokopedia. In the travel space, he pointed out that growth in insurance revenue for companies like Expedia is outstripping ticket sale growth which bodes well for Traveloka.

Right now the focus is on developing new insurance products, cementing its position in the market and also expanding into new markets in Southeast Asia — which now has more internet users than the entire population of the U.S., according to a report co-authored by Google.

Its work with Go-Jek will take it into markets like Vietnam and Thailand — where Go-Jek is expanding its ride-hailing business — but Randing said he is also in talks with other companies and insurance providers to offer more modular options for consumers. That could take the form of usage-based car insurance, or cover for public transport-based delays, he explained.

“Our goal is to make insurance less expensive than half of cup of a Starbucks coffee,” Randing said. Adding that the company may look for new funding in early 2019 as it grows its regional footprint.

Interestingly, PasarPolis has already gone overseas by tapping India for talent — which is something Go-Jek and others have also done. Randing said the company has 15-20 engineers in Bangalore, while the core team, partner support and tech integration staff are housed in Indonesia.