Elvie, a femtech hardware startup whose first product is a sleek smart pelvic floor exerciser, has inked a strategic partnership with the UK’s National Health Service that will make the device available nationwide through the country’s free-at-the-point-of-use healthcare service so at no direct cost to the patient.

It’s a major win for the startup that was co-founded in 2013 by CEO Tania Boler and Jawbone founder, Alexander Asseily, with the aim of building smart technology that focuses on women’s issues — an overlooked and underserved category in the gadget space.

Boler’s background before starting Elvie (née Chiaro) including working for the U.N. on global sex education curriculums. But her interest in pelvic floor health, and the inspiration for starting Elvie, began after she had a baby herself and found there was more support for women in France than the U.K. when it came to taking care of their bodies after giving birth.

With the NHS partnership, which is the startup’s first national reimbursement partnership (and therefore, as a spokeswoman puts it, has “the potential to be transformative” for the still young company), Elvie is emphasizing the opportunity for its connected tech to help reduce symptoms of urinary incontinence, including those suffered by new mums or in cases of stress-related urinary incontinence.

The Elvie kegel trainer is designed to make pelvic floor exercising fun and easy for women, with real-time feedback delivered via an app that also gamifies the activity, guiding users through exercises intended to strengthen their pelvic floor and thus help reduce urinary incontinence symptoms. The device can also alert users when they are contracting incorrectly. 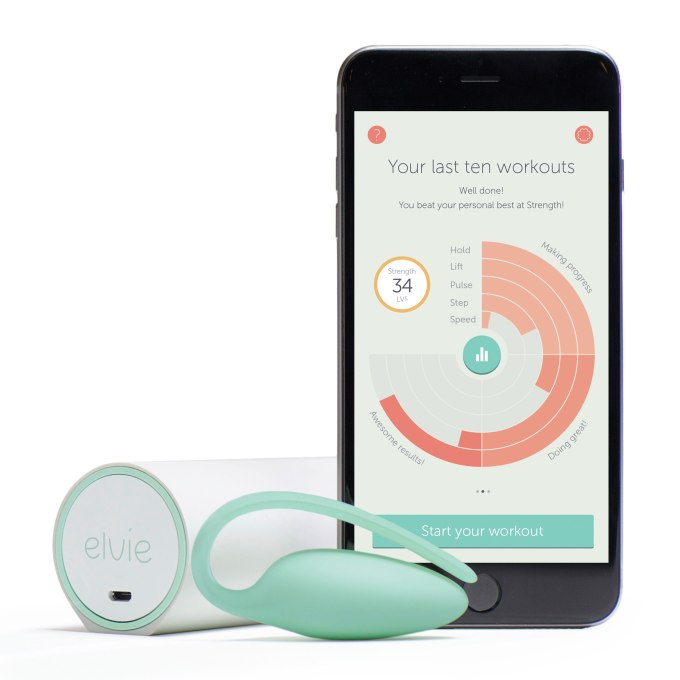 Elvie cites research suggesting the NHS spends £233M annually on incontinence, claiming also that around a third of women and up to 70% of expectant and new mums currently suffer from urinary incontinence. In 70 per cent of stress urinary incontinence cases it suggests symptoms can be reduced or eliminated via pelvic floor muscle training.

And while there’s no absolute need for any device to perform the necessary muscle contractions to strengthen the pelvic floor, the challenge the Elvie Trainer is intended to help with is it can be difficult for women to know they are performing the exercises correctly or effectively.

Elvie cites a 2004 study that suggests around a third of women can’t exercise their pelvic floor correctly with written or verbal instruction alone. Whereas it says that biofeedback devices (generally, rather than the Elvie Trainer specifically) have been proven to increase success rates of pelvic floor training programmes by 10% — which it says other studies have suggested can lower surgery rates by 50% and reduce treatment costs by £424 per patient head within the first year.

“Until now, biofeedback pelvic floor training devices have only been available through the NHS for at-home use on loan from the patient’s hospital, with patient allocation dependent upon demand. Elvie Trainer will be the first at-home biofeedback device available on the NHS for patients to keep, which will support long-term motivation,” it adds.

Commenting in a statement, Clare Pacey, a specialist women’s health physiotherapist at Kings College Hospital, said: “I am delighted that Elvie Trainer is now available via the NHS. Apart from the fact that it is a sleek, discreet and beautiful product, the app is simple to use and immediate visual feedback directly to your phone screen can be extremely rewarding and motivating. It helps to make pelvic floor rehabilitation fun, which is essential in order to be maintained.”

Elvie is not disclosing commercial details of the NHS partnership but a spokeswoman told us the main objective for this strategic partnership is to broaden access to Elvie Trainer, adding: “The wholesale pricing reflects that.”

Discussing the structure of the supply arrangement, she said Elvie is working with Eurosurgical as its delivery partner — a distributor she said has “decades of experience supplying products to the NHS”.

“The approach will vary by Trust, regarding whether a unit is ordered for a particular patient or whether a small stock will be held so a unit may be provided to a patient within the session in which the need is established. This process will be monitored and reviewed to determine the most efficient and economic distribution method for the NHS Supply Chain,” she added.