Last year I had a good time comparing Sony’s DPT-RP1 with the home-grown reMarkable. They both had their strengths and weaknesses, and one of the Sony’s was that the thing was just plain big. They’ve remedied that with a much smaller sibling, the DPT-CP1, and it’s just as useful as I expected. Which is to say: in a very specific way.

Sony’s e-paper tablets are single-minded little gadgets: all they do is let you read and lightly mark up PDFs. If that sounds a mite too limited to you, you’re not the target demographic. But lots of people — including me — have to wade through tons of PDFs and it’s a pain to do so on a desktop or laptop. Who wants to read  Amazon’s Antitrust Paradox by hitting the down arrow 500 times?

For legal documents and scientific journal articles, which I read a lot of, a big e-paper tablet is fantastic. But the truth is that the RP1, with its 13.3″ screen, was simply too big to carry around most of the time. The device is quite light, but took up too much space. So I was excited to check out the CP1, which really is just a smaller version of the same thing.

To be honest, there’s not much I can add to my original review of the RP1: it handles PDFs easily, and now with improved page jumping and tagging, it’s easier to navigate them. And using the stylus, you can make some limited markup — but don’t try to do much more than mark a passage with an “OK” or a little star (one of several symbols the device recognizes and tracks the location of).

It’s incredibly light and thin, and feels flexible and durable as well — not a fragile device at all. Its design is understated and functional.

Writing isn’t the Sony tablets’ strong suit — that would be the reMarkable’s territory. While looping out a circle or striking through a passage is just fine, handwritten notes are a pain. The resolution, accuracy and latency of the writing implement are as far as I can tell exactly as they were on the larger Sony tablet, which makes sense — the CP1 basically is a cutout of the same display and guts.

PDFs display nicely, and the grid pattern on the screen isn’t noticeable for the most part. Contrast isn’t as good as the latest Kindles or Kobos (shots in the gallery above aren’t really flattering, since they’re so close up, but you get the idea), but it’s more than adequate and it beats reading a big PDF on a small screen like those on your laptop’s LCD. Battery life is excellent — it’ll go through hundreds of pages on a charge.

A new mobile app supposedly makes transferring documents to the CP1 easy, but in reality I never found a reason to use it. I so rarely download PDFs — the only format the tablet reads — on my phone or tablet that it just didn’t make sense for me. Perhaps I could swap a few over that are already on my iPad, but it just didn’t strike me as particularly practical except perhaps in a few situations where my computer isn’t available. But that’s just me — people who work more from their phones might find this much more useful. 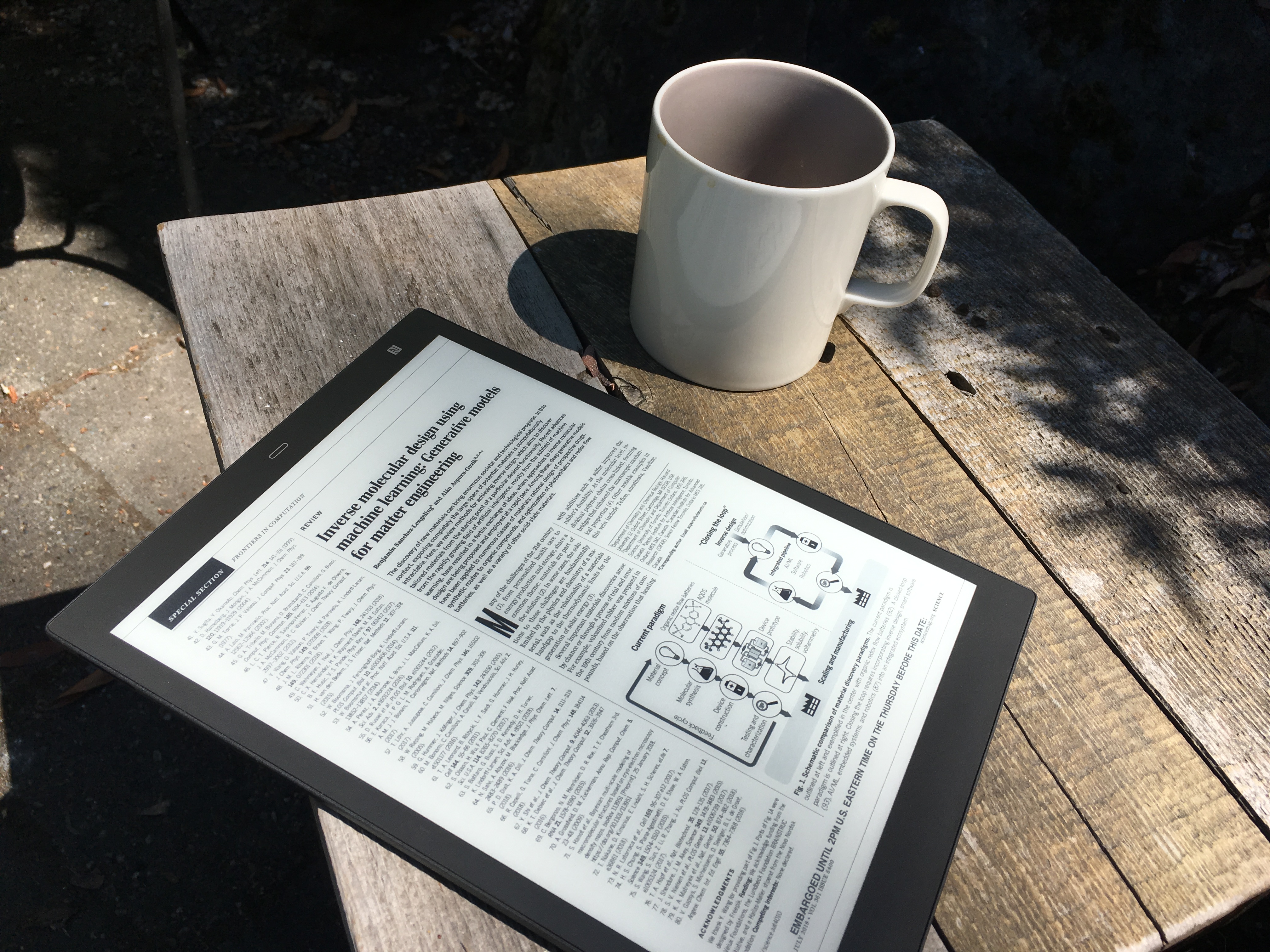 Mainly I just enjoyed how light and simple the thing is. There’s almost no menu system to speak of and the few functions you can do (zooming in and such) are totally straightforward. Whenever I got a big document, like today’s FCC OIG report, or a set of upcoming scientific papers, my first thought was, “I’ll stick these on the Sony and read them on the couch.”

Although I value its simplicity, it really could use a bit more functionality. A note-taking app that works with a Bluetooth keyboard, for instance, or synchronizing with your Simplenote or Pocket account. The reMarkable is still limited as well, but its excellent stylus (suitable for sketching) and cloud service help justify the price.

I have to send this thing back now, which is a shame because it’s definitely a handy device. Of course, the $600 price tag makes it rather a niche one as well — but perhaps it’s the kind of thing that fills out the budget of an IT upgrade or grant proposal.